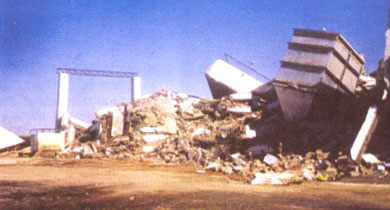 People of habitats that have witnessed destruction en-mass develop a peculiar psyche. My first encounter nearly three and half decades ago, with such a psyche was at a small way-side railway station near Hoshiarpur in Punjab. The village overlooking the railway station, was situated on a large mound with a boundary wall all around, perhaps relicts of an old fort! The clock struck five in the evening and the place became deserted. An eerie silence prevailed. Vultures came from no where and sat on the boundary wall, peering eagerly towards the railway line. Next evening again the same scene was repeated. The station master, a sardarji in his late fifties told me that one fateful evening in August 1947, train loads of passengers were butchered at this place. Since then no one ventures out in the evening and the vultures return daily in the hope of more dead bodies to scavenge.

Parting is painful. Unexpected death due to a disaster hurts more. Imagine the mental condition of the near and dear ones of those 73,000 who perished in the earthquake in Kashmir last year! The women, innocent children and old men are distressed beyond imagination.

Earthquake leaves in its wake a heavy trail of destruction. People lose their families, dwellings, belongings, bread-winners, bread and jobs too. Earthquake does not spare anyone, rich or poor, developed or developing nation. Developed countries like USA and Japan have learnt lessons from repeated earthquakes and have evolved techniques and methods to obviate loss of life. Places like schools and mosques where people congregate are most vulnerable. The Republic Day of 2001 will remain for ever a black day in the minds of the parents who lost their children in Anjar in Gujarat. These 400 innocent lives were lost just because they had assembled to take part in the parade.

The mobile sub-continent has had several major earthquakes in the history, a part of the record of which is tabled here to show how many lives have been extinguished prematurely.