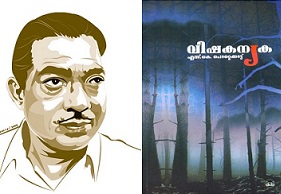 Published in 1948 and written against the back drop of a historical event that has taken place in the district of Wayanad, ‘the Wildwest of Kerala’, Vishakanyaka penned by the renowned Malayali writer S.K.Pottekatt is the heroic saga of Travancore Christians who fought against the chilly winter, malaria and wild animals and who transformed the woody hills of Malabar into agricultural orchards. They had sacrificed themselves at the altar of green revolution even before the modern governments entered the scene. The novel can be looked at not as an individual story but a piece of social history in which the mankind do not bow their head before nature. People hailing from the region of Travancore had migrated to the north east regions where environment is purely hostile for their very sustenance. The hard soil of the land gives us the impression that no ploughing was done and it remained barren ever since the creation of earth. The migration continued till the late-Sixties of the 20th Century. As the title suggests, Vishakanyaka is the mythical maiden who saps the energy of the man who falls for her and it is an apt description of the land where countless men and women fell ill or died fighting the vagaries of nature. The narration of the meeting between the settlers and the soil serves as the crux of this creative output.

The first batch of Travancore settlers had to face the fatal attack of malaria. As the land was unploughed, it is designated as ‘maiden.’ The novelist confesses: “Knowingly or unknowingly, I felt a love for the Travancore brothers, who paved the first steps for a united Kerala. I think that they deserve admiration because of their astonishing industriousness and the courage, self-sufficiency, and confidence for commencing a new life in an unfamiliar region, without availing any kind of governmental support or sympathy. I was urged to write this novel more by compassion and consideration I felt for their sufferings and sacrifices than reverence.”(Vishakanyaka: 7)

Pottekatt’s Vishakanyaka is a novel devoid of a particular hero. The heroine is the wildland/toxic damsel of Wayanadu, who with her magical power enchanted young farmers and sucked their blood [like a vampire or female Dracula]. Such an enthusiastic novel that describes the conflict between man and nature cannot be seen in any Indian language. The novel is a saga of mankind who are hesitant to surrender in front of the atrocities of nature. If a generation fails to achieve the goals, the next ones come forward with greater courage to continue the fight. The farmer-settlers, as a whole, are installed as the hero. ‘The elder-brothers from Travancore,’ while retaining their ethology, are envisaged as a single faction. The wild nature of Wayanadu waits for them with its seductive and perfidious pits. After tempting the hardworking as well as the idyllic alike, the maiden soil ridicules them. The novel is the narration of the meeting between the settlers and the soil. The bewitching but toxic land as the heroine obliterated with fatal diseases kills them at the end with her venomous embraces. The farmer settlers with their spectacular expectations and hopes finally travel to the ‘undiscovered country from whose bourn no traveler returns’. The novel depicts the conflict between man and nature. The very notion of giving a voice to nature can be said to be postmodern. Ecocritical readings bring out the voices of Nature or the non-human environment at its best.

Pottekatt’s characters, as he mentions in a note to another novel, “were people in blood and flesh”. It is not an individual’s story, but a piece of social history in reality. Anthony loses the ascetic, pure, and innocent paradise. Here is a character, Anthony, who does not rise to the status of a hero; but he can be called the novelist’s representative/spokesman or the central consciousness. As the symbol of cruel nature, here is Madhavi and as the representation of the farmer-batch, the young man Anthony, who is defiled by her at the end of the novel. When Anthony, abandoning everything and returns to his native region, new batches of farmers, it is stated, come to the wildland of Wayanadu. To him, Madhavi becomes a venomous damsel, a serpentine/poisonous maiden, or a ‘la belle dame sans merci’ of the renowned sensuous poet John Keats. He equates the lusty maiden soil of Wayanadu with Madhavi. Knowingly or unknowingly, this becomes the surface-structural message of the novel/ novelist. But, the sincerity and adeptness in the descriptive/poetic/nature-lyrist power expose the deep-structural sub-text/texture diametrically opposite and the portrayal of Anthony turns out to be ironic.

The novel is composed in such a way that it disentangles the intertwining histories of colonialism, capital, and local agency and thereby to capture the circumstances that spawned the migration of ‘forward-looking’, mostly marginal, peasants of the erstwhile princely state of Travancore into its eastern hills and to the erstwhile British Malabar. It renders the message that development via collaborative effort is not at all a hard nut to crack provided the people are committed to their goals. Sacrifice is needed for any kind of development. The mode of development envisioned by him via the novel can be imitated for the betterment of our lives. Swami Vivekananda was of the firm conviction that any development can be brought out only through the people. Man has immense potentialities. Normally these energies are scattered and dissipated. If they can be converged and focused, great power can be created. If sunlight is focused through a lens, it can get rays. People took this message of swami to heart and tried to put it into practical terms. This provided the motive power for the progress of India in the achievement of independence and development in economic, political, social, and other fields. . His clarion call “Uttisthata Jagrata Prapya Varannibodhata Kshurasanna Dhara Nishita Dustayadurgama Pathah tat kavayo Vadanti”– arise, awake, and rest not till the goal is reached. This had an electrifying effect on multitudes across the globe. The very novel Vishakanyaka can be evaluated as the practical exhortation of the philosophy of this towering figure. Hence no age and custom can stale the infinite variety made immortal by this novelist. Though it might sound dry and lengthy in some instances, the way he endeavored to depict his eponymous hero has often succeeded in dragging back the readers’ attention and making them interested in the further description and thereby finish the novel in a single sitting. However, Pottekatt has succeeded in taking his readers on the voyage to Wayanadu, and Vishakanyaka being considered as a classic in Malayalam is an open testimony to this.