Chapter 1 - The Prime Minister of Tawa 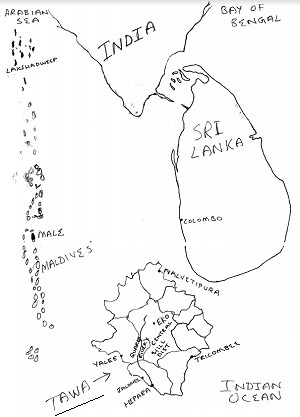 ‘I don’t believe it,’ Judy exclaimed as soon as she saw the long, shiny, red carpet sparkling in the sunlight. It must have been at least twenty five metres long and stretched from the top of the mobile stairway till the spot where the dignitaries waited to receive them. Once they stepped out of the plane and started to climb down the stairs, they noticed that the carpet was actually quite worn and even had a few small holes in it. And it was not a single carpet, but a series of carpets stretching one after another, the end of each carpet covered by the beginning of another. Heather gingerly climbed down the stairs behind her mother. She had never been to Tawa before. Moreover, she was wearing a doree and sarong for the first time in her life. She was sure that the long ruffles of the doree at the shoulders made her look silly. Her Dad had told her that all children in Tawa wore a doree and sarong, but Heather wasn’t too sure. There were no children to be seen as she got off the aircraft. It was all a bit of a shock for a nine-year old. Ever since Mash had announced his intention of returning to Tawa, she had been inundated with attention from various quarters. Judy too was wearing a doree, and sarong, with a long thuli suspended between both shoulders. Like Heather, she too was uncomfortable wearing the doree, sarong and thuli, since she was also wearing them for the first time in her life. The red carpet was just one of the many surprises, most of them pleasant ones, that Judy and Heather had been exposed to in the past three months.

Unlike Judy and Heather, Mash was not overwhelmed by the reception. He took it in his stride. And he looked quite comfortable in his kiree and sarong, as if he had never been away from Tawa and had worn them all his life. There was very little evidence of the quiet tax consultant he had been till a couple of months ago. He walked down the stairs and towards the waiting dignitaries as if he were a King returning to his Palace after a rather long sojourn to a neighbouring kingdom. After all, wasn’t he the son of Seleem Zoloda, the martyr who was called the Father of the Tawan Nation?  From the tarmac, the airport did not seem to have changed much from what he remembered of it. During General Naranin’s time, its name had been changed from Kampulee International Airport to the Royal Moshee International Airport, a silly attempt to show loyalty to the King. Even after General Naranin fled the country, the name remained the same. No one except the Seedas had a quarrel with the royal family and it would have been silly to change its name once more to that of the village where it was located.

Horan Samiban came forward to meet him, his sarong flapping against his ankles in the breeze. ‘Alakom Maheshdas-raan. Welcome home,’ he greeted Mash.

‘Alakom, Horan-raan,’ Mash responded. ‘It’s been such a long time.’ Mash had last seen Horan when he was fifteen, around twenty seven years ago. The old man with a chubby careworn face who stood in front of Mash holding his hand bore little resemblance to the young Horan Samiban Mash had known.

‘Maheshdas-raan, I wish you had come home five years ago. But better late than never, as your English friends might say.’ It was a sincere wish. Whatever Horan might feel about relinquishing his prime ministership, he was genuinely fond of Mash, whom he had known from the time of his birth.

‘Thank you Horan-raan. I too wish I had come home earlier. But I am here now.’ Horan looked relieved to see him, Mash thought.

Mash walked around and shook hands and exchanged Alakoms with the rest of the dignitaries. Judy and Heather trailed behind him. Nedeem Balvanee, now the general secretary of the party, was the only other person whom Mash recognised. Nedeem hadn’t changed much. He had been a thin wiry man with a mop of thick curly hair, who held Mash’s father in awe. Except for the fact that his head was now covered with grey hair, Nedeem looked almost the same. Just two survivors from my father’s time, Mash thought as he shook Nedeem’s hand and muttered ‘Alakom Nedeem-raan’. General Naranin had decimated everyone else in the entire top hierarchy of the TFP. Of course, Kemon Padusee had also survived, but he had turned traitor to do so. Mash was not sure he wanted to ever meet Kemon.

Peelee Threeman, the interior and defence minister loomed in front of him. Mash had never met Peelee before since Peelee did not date from his father’s time.

‘Peelee-raan, I have heard a lot about you. It is an honour to meet you finally.’

‘I thank our Guardian Akbar for having brought you back to us,’ Maheshdas-raan,’ Peelee said, lifting up his hands in the air. There was something about Peelee which Mash did not like. Peelee struck him as a crude man with strong opinions, a man who could be obstinate, even after he was proved wrong. The chain made up of large prayer beads which hung around Peelee’s neck, his thick handle-bar moustache which was party grey, his enormous paunch, all testified to that. Nevertheless, Mash was extremely polite to him. After Horan, Peelee was supposed to have done most to end General Naranin’s military rule. Like Horan, he too had spent a few years in jail.

Vikan Messenee on the other hand struck Mash as an extremely likeable chap. He was the only Seeda in the ministry. He had been given a nominal post – the Ministry of Posts and Telegraphs or something equally insignificant. I’ll promote him to the cabinet, Mash decided.

The photographers seemed to have had enough. They walked away towards a bus which would take them to the airport. None of the men said a word to Judy, though they all greeted her with folded hands. Vikan Messenee was about to say something to Heather, but lost his nerve at the last minute.

‘Go on Vikan,’ Mash told Vikan omitting to add the respectful ‘raan’ at the end of his name, even though Vikan was at least forty years old, almost as old as he was. ‘Do say something to Heather.’ Vikan had problems mouthing the name Heather. There isn’t a single Tawan name for women which ends with a harsh ‘R’.  A few days after Heather was born, Mash had received a message from Horan, conveyed to him through a Tawan man who lived in London and organised occasional protests against General Naranin in front of the Tawan embassy. Could Mash please give his child a Tawan name? Something that befitted Seleem-raan’s grandchild? It would be a small gesture that would convey to the people of Tawa that Maheshdas-raan planned to return to Tawa as soon as he could. Mash had ignored the request. He did not even consider the possibility of giving his daughter a name which worked in both cultures, the way his father-in-law had done for his wife. Judy, when pronounced as ‘Judee’ with an elongated eee and a soft ‘d’, meant ‘nymph’ in Keenda. Judy’s father had been very much Tawan at heart, though he had married an English woman and had never returned to Tawa. For Mash, naming his daughter Heather had been an additional promise to himself that he would never return to Tawa. Yet, here he was, standing on Tawan soil, introducing his family to various Tawan politicians.

‘Heather-ree, I am so glad that you and your parents have come to Tawa,’ Vikam politely told Heather who did not understand a word of what Vikan told her.  Vikan spoke Keenda with just a very slight trace of a Seeda accent.

‘Why don’t you thank Vikan-raan? He’s just welcomed you to Tawa.’ Mash prodded Heather once more.

‘Tuti,’ Heather told Vikan with hesitation, gathering up all her courage. It was one of the few Keenda words which she knew.

The men burst into guffaws and laughter.  ‘She is only nine and yet so brave. Just like her grandfather,’ someone said.

There seemed to be no further need for any more banter or small talk after Heather uttered her thanks. Mash looked behind him and saw that the rest of the passengers were yet to disembark. Two stewardesses stood near the front exit to prevent anyone else from following Mash and his family down the red carpet. The rear exit was still unopened and the mobile stairway meant for that exit was parked a few metres behind the aircraft’s tail.

‘Horan-raan, let’s leave. I hate to keep people waiting on my account.’ Mash took the lead and started walking towards the bus that waited to convey them to the terminal. Horan followed him.

‘What’s the programme for today Horan-raan?’ Mash asked Horan as the airport bus conveyed Mash, Judy, Heather, Horan and a few others to the airport terminal.

‘Nothing much Maheshdas-raan. We realise that you must be exhausted from the journey. So, other than a brief meeting with his Majesty and an interview with Stephen Seymour, we do not have much planned for today.’

Heather tugged at Mash’s sleeve. ‘Dad, I forgot to thank the lady who helped me put on this outfit. I think she’s standing over there, near the exit.’ Heather pointed to the two stewardesses who stood near the front exit of the aircraft. ‘Can I go across and thank her and come back?’

‘No honey, you can’t do that now. I’m sure we’ll find a way of thanking her,’ Mash replied.

‘You can write to her and thank her,’ Judy added, cutting off Mash as he started to say something to Horan.

Mash finally managed to ask Horan ‘Do I have to be interviewed by Stephen Seymour today? I will give a much better account of myself if I have a day’s rest.’

‘He was quite insistent and well, he is the only foreign correspondent who seriously covers Tawa. He is based in Colombo, but his wife is Tawan and he comes here at least once a month. Generally he writes good things about us and he has been quite critical of Kemon Padusee and the PDA. We try not to displease him too much. In fact, he is going to interview me in a short while. We need to keep the journalists happy you know.’

‘I start the campaign tomorrow, don’t I?’  It was a statement, more than a question.

‘Yes Maheshdas-raan. We do not have much time to lose. Just six more weeks for the elections to be held! I wish you could have come here earlier. The PDA started its campaign a month ago. We have been doing our best, but we were hard pressed without your presence. From tomorrow you will have to work hard. We will all have to work hard. Very, very, hard. That bastard Kemon is practically snapping at our heels.’

‘Well, I don’t think it is your fault,’ Mash consoled Horan. Actually Mash did think it was largely Horan’s fault that a specimen like Kemon Padusee was proving to be such a serious challenge. For a party created by the hated General Naranin to do so well, Horan and the rest of them must have made a few serious goof-ups.