One Eyed Jacks at 60 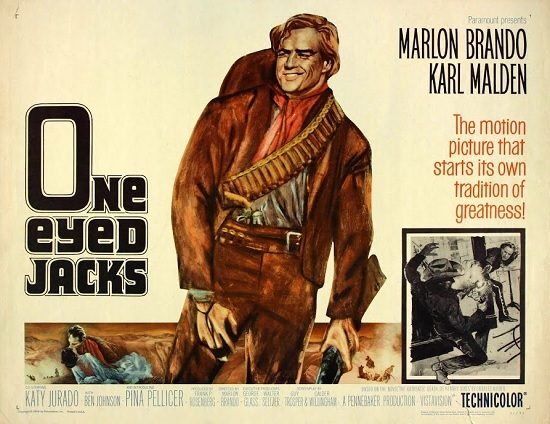 One Eyed Jacks at 60 – From its audacious banana-peel opening, Brando’s tense drama is a brooding essay on revenge, patricide and humiliation.

Its screenplay was called A Burst of Vermilian and it was to be directed by Stanley Kubrick, fresh from his success with Spartacus a year earlier. But working with explosive lead actors wasn’t on the director’s agenda and after firing Sam Peckinpah, he himself got removed from the project by Brando after six months of development work. The star had a definitive vision of making a bold statement, a reworking of the Billy the Kid and Pat Garrett friendship that was in essence a father-son relationship, the conflict between the outlaw and the lawman; in a perverse twist, the outlaw chases the lawman after being betrayed, finding him in a picturesque, idyllic setting of Monterey and, after being reconciled, is humiliated and sadistically beaten up and sent out of town. Being the complex, dense, psychologically disturbing Greek drama that it is, he returns to exact his revenge in a way that could hardly be more complete; he seduces the older man’s stepdaughter, shoots him in the back, sees him die face down in the Californian dust, literally and metaphorically rubbing his nose in it to complete the humiliation and rides away, with the stepdaughter behind him.

Throughout, the elements and dimensions of the Greek tragedy, the multiple layers, the symbolism and metaphors, the interplay between the two leads, starting from casual and cavalier, to the deranged, homicidal and fatally damaged, irredeemably violent turn it takes, the film is a rollercoaster ride through a complex and powerful set of emotions. It is easy to see why Brando took charge of the film; he saw it as more than a revenge drama, a classical Greek and latterly, an American tragedy, a study of paternalistic, familial and filial feud, of two men, effectively a surrogate father and son, falling out with each other, before the inevitable showdown and after being temporarily reconciled and agreeing to a casual truce of sorts. The threat of violence is never too far from the surface, even when the pair share a drink and a meal; the older man’s wife and stepdaughter can sense the bad blood between them; there is revelry and fireworks during the local fiesta, walks along the Pacific Ocean as the waves roll in; shooting and whipping in the town square as the older man asserts his authority, to reinforce to the younger man that he holds the power in the town of Monterey and is above the law.

The film’s length -141 minutes- is a hint of how the film’s narrative was going to unravel. This wasn’t going to be a taut, time-constrained, economically precise, studio-bound, low budget, revenge potboiler. It was shot on location in California, Death Valley, Mexico and some left-over film sets from previous films. It was infused with brooding menace, bold dialogue, nuanced characters, gritty realism; it has a grandeur in the costal setting as well as an undercurrent of explosive moods in the visceral way the protagonists, each other’s only kith and kin, become enemies; there is also the father-son backdrop story which underpins the narrative and the revenge motif is so inexorable and consuming that neither side will hesitate at the final moment. Brando builds up the tension slowly; the pace is unhurried, as if deliberately stretching and expanding time; the anger, the fury, the sense of foreboding, the circuitous arc of the characters’ journey, the cathartic explosion at the precise moment, the uncontained emotional release when the bullets are fired; they all point to the director and star fulfilling his true vision, enraptured and enamoured with the story and its possibilities.

The plot is quite simple. In 1880’s Mexico, two friends, the older Dad Longworth played by Karl Malden, and the younger, Rio, played by Marlon Brando, escape with two sacks of gold after robbing a bank in Sonora. The Rurales corner them in the mountains and it is decided that Dad goes to get fresh horses and return to collect Rio. But he doesn’t and Rio is captured and spends five years in the lead mines doing hard labour, before escaping with a Mexican convict. He now plots his revenge on his former partner, but there are complex layers in the arc of the story and narrative; father betrays son who is obsessed with vengeance, but it has to be so complete that it must encompass humiliation, deceit, patricide and identity itself. The seduction of the stepdaughter, Louisa, by the rolling waves of the sea on his own turf, turns out to be an act that finally enrages Dad. Rio has partially repaid Dad in kind for his betrayal, for taking the gold with him, for the pain and suffering he endured in his five years of incarceration. During those years, an outlaw becomes a lawman by deception and assumption of another identity; reflecting on his fate, Rio has turned brooding into an art form. Brando’s performance is quite hypnotic and mesmerising as the wronged man.

Brando’s directorial bow turned out to be the last film made in vistavision, a wide-angled device whereby the negatives were projected horizontally on the screen, giving the images a deeper and sharper focus. Such great films of the fifties as the Searchers, Vertigo and North by Northwest were filmed in vistavision before it was abandoned. The star envisaged the film as something quite epic in design and scope; the shooting was leisurely, sometimes waiting for hours or days for the right moment to capture the physical details; it far exceeded its original budget of 1.8 million dollars; the two principal stars often got drunk, leading to delays as did Brando’s lack of technical nous. There is rumoured to be a 4 hour version in the Paramount vaults, though this is unconfirmed. The restored print, as overseen by Martin Scorsese and Steven Spielberg, is very close to what its star had in mind; it even boasts an introduction by the former who is a revered scholar of old Hollywood and gives it the ultimate nod of approval.

What distinguishes Jacks from other westerns is the absence of traditional set-pieces. There is no cattle-drive or spectacular shoot-outs; no weddings, funerals or panoramic vistas though the film is beautifully shot by Charles Lang Jnr to give it the edge of a Greek drama; there are no trains or train hold-ups; nor are there cattle-barons, businessmen, power-brokers, senators or wealthy capitalists in whom power rests. Despite being an outdoor film, it is essentially an intimate opera, an engrossing drama between two men who have a spiritual bond, a latent homo-erotic obsession. Both are rogues, liars, philanderers, thieves, morally reprehensible and untrustworthy; both hide their real face behind a façade, although the older man, called Dad by his younger partner with a fast draw, has a vicious and demonic side that manifests itself towards the end. In the jail when the two men have a chat while Rio is waiting for his case to be heard, he asks Dad whether he will get a fair trial. “Sure kid, sure. You will get a fair trial…..and then I am going to hang you personally”. When Rio tells Dad that he is the one-eyed Jack around here and has shown the other side of his face, the stage is set for a showdown. Dad wields all the power, authority and cannot countenance being toppled; by contrast, Rio has nothing except a sense of injustice, betrayal and the love of a woman; in the end it is enough, but only just.

It’s the juxtaposition of relationships which makes the film so dense and so consistently fascinating. Apart from the overt father-son association, albeit in a surrogate form, there are other twists to consider. As he lays dying, his face in the dirt, Dad fires a shot at his stepdaughter, riding behind Rio as he makes a swift exit. The ambiguity of his motive is quite startling; is he trying to kill his daughter, her unborn child, or both, in a show of cataclysmic rage or is it a parting shot at the world and all it stands for. The implication is that Dad’s narcissism is such that being usurped by the younger man is a fate worse than death and nothing must get in his way. Brando elevates the film to a mythical dimension with an acknowledgement to Euripides’ Medea in which the titular heroine, after discovering her husband’s infidelity and being relegated to the periphery, wreaks a bloody and homicidal revenge on him. A man wronged or a woman scorned: which of the two is more deadly and to be avoided at all cost?

On the outskirts of town, Rio tells Louisa, his paramour, to wait for him and look out of the window on dark nights in the hope of seeing a jackass; that will be him and he will come back for her in the spring. But as an outlaw and fugitive, he must keep moving, first to Oregon and then out of harm’s way. His myth has already overtaken him and he may find himself ambushed by it. It is doubtful if he can settle down. Neither he nor Dad are to be trusted if you are in a coach with them; one will rob you and throw you out of the carriage; the other will toss you a half-filled bottle of water to ensure you don’t die of thirst immediately, but nothing else by way of simple comforts.

Betrayal is a recurring theme in Brando’s films. In On the Waterfront, he is betrayed by his older brother Charlie, with the offer of a one-way ticket to Palookaville, for being a loser. In One-Eyed Jacks, father betrays son and suffers for it with a reversal of fortune as complete and total as it’s possible to be. They are both incorrigible and beyond redemption. Hedonists and pleasure-seekers, they enjoy the fruits on offer, but have no respect for humanity.