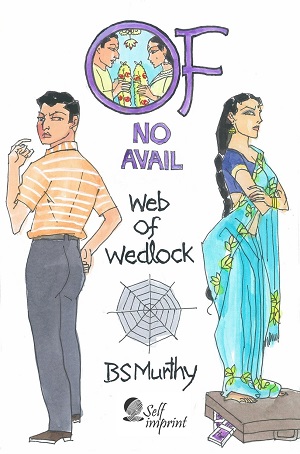 “Since she had nothing against you, wonder why she brought things to such a pass?” she said.

“I think it all started with her obsession to lead the so-called good life and a burning desire to have the goodies of life never mind they were beyond our material means,” he said ruefully. “So, when she came to know that my bribe money could be the source of her material fulfillment, it became a ‘so near and yet so far’ situation that insensibly made her insane. Then, as they say, one thing led to the other in the vicious marital cycle of our life. But to give devil its due, she was kind and considerate to my parents who came to stay with us right after our marriage.”

“Pursue if thou wants with zeal / Instincts then would spin thy mind,” cautioned us Krishna in the Gita but seemingly to no avail,” she said ruefully.

“Sadly so but equally true are William Congreve’s words,” he said in all vexation, “that heaven has no rage like love to hatred turned. Nor hell a fury like a woman scorned. Given my horrid life at that torrid juncture, while seconding the second line, I would paraphrase the first as; court has no rage like marriage to divorce turned. Oh, how she tried to picture me in the hall of justice as a suspicious character! Besides, she suffered no qualms in lying on oath that I abetted my parents, dead and gone by then, to routinely ill-treat and humiliate her at every turn. Worst of all, in a et tu, Brute moment, she sought to justify her case for divorce as well as maintenance by stating that I forced her to give up her job suspecting her fidelity. What’s worse, as her lawyer was wont to drag the case, of course aided, in no small measure, by his lordship, who prided himself as a master of reconciliations, it became apparent that neither she was in a hurry for divorce nor the judge to grant it to me. While the lordship’s intention seemed altruistic, hers was to keep me in the limbo so as to bar a fresh nuptial for me as she knew how miserable I could be without a woman in my life. Besides, as the Damocles’ Sword of maintenance hung over my head, I never felt as hapless in my life of adversities.”

“Isn’t it sad and strange in the same vein?” she said affected no end.

“Maybe that’s life,” he said in all vexation, “and if anything, the unending hearings at the court hall seemed to testify to that. However, sensing her mischief, and seeing that she wasn’t put up with her parents, I smelt a rat at last. Well, she was wont to tell me that though a rich and handsome man used to pester her to marry him, owing to her inhibition of wedding out of caste; she had forgone that God-given opportunity. I used to think that she could have made up that story to highlight my material mediocrity as a way to humiliate me but given the turn of events, I started wondering whether it was all true and that he got hold of her in the meantime; and for all that, she might have sought him on her own to fulfill her unfulfilled dreams. What an irony it would have been had she cast me away to make it with him by shedding her caste inhibitions; so I was constrained to engage a private detective to find that out to counter her strategy in the court.”

He stopped at that as if the findings were distasteful for their recollection leave alone narration.

“Skip that if it’s hurting,” she said pressing his hand.

“It really hurts but so be it,” he continued uninhibited. “When it came to light that she was living with that man after ruining my life, I was devastated to say the least though her unseemly conduct would make her case for maintenance collapse like a house of cards in the court hall. Yet it didn’t appeal to my sense of decency to go to town with her dubious character to score over her; so I sought her in the court premises and told her that her only saving grace lies in setting me free without any strings attached to our separation. Luckily for me, she saw the writing on the wall and saved me the shame of shaming my wife to save my skin.”

“Are you bitter feeling betrayed?” she said.

“Not after I could view the web of our wedlock through her marital prism,” he said. “She believed that the material fringes make value additions to life without which she saw it merely as a wasteful living. Maybe, one can fault her outlook of life that too at the cost of being judgmental but can’t really blame her for wanting to lead a life she wanted to live. But the moot point is the way she went about it which of course depends on one’s nature and character in the given circumstances, and that’s in the realms of morality which is a different subject altogether. Anyway, all that helped me to see life in more ways than one.”

“Anyway, after that four-year court ordeal my lawyer managed to get the court’s nod to untie our nuptial knot, and that tells a different story about the judicial apathy,” he continued. “You would’ve read a lot about our country’s judicial jigsaw, but I’ll tell you something about its innate stupidity. On any given day, the so-called cause list, containing more cases than a Bakasur of a judge can bite, consumes much of, if not all, his pre-lunch session in routinely granting adjournments on one ground or the other. That only leaves the post lunch session for him to masticate a couple of cases at best with witnesses, arguments, and such. What a colossal waste of scarce court, nay public, time and yet wonder why it won’t occur to the wisemen in the black robes to take only that much in their judicial plates at a time as they can bite and chew as well.”

“Why, the insiders seldom have an outside view,” she said.

“That apart, the very idea of change is an anathema to the status quo,” he said. “It didn’t take me long to realize that our Byzantine system suits the culprits in the criminal cases, vexes the righteous in the civil suits and hurts the hurt in the divorce matters. That’s how I felt that I should try to contribute my little bit to hasten the justice delivery; moreover, as our company was in doldrums by then, I saw the legal profession as a long-term career option for me. So, I opted to study law in an evening college to eventually enroll myself at the bar.”

“I do remember that your grandfather was a lawyer,” she said.

“A law author at that but wonder why he didn’t advise me to step into his shoes then,” he said.

“Better late than never and I’m sure his genes are serving you well at the bar,” she said.

“Maybe my impulse to serve at the bar itself owes to them,” he said with a sense of satisfaction. “You may know he was known to fight on the right side of justice so much so that the judges tend to pre-judge the cases that he had advocated, but on the flipside, it didn’t yield him the monetary returns the profession is known to yield to its protagonists. Possibly, my career graph too could follow his curve, and I won’t grumble about that but anyway that’s in the realms of the future.”

“I hope ethics and wealth would blend in your career,” she said.

“That is practice willing,” he said smilingly.

“By the way, have you ever tried to find me out all these years?” she said.

“Frankly, no for I always felt that while gentlemen remain cold to their old flames, blaggards inflame them,” he said with conviction.

“Glad you appreciate,” he said pressing her hand.

“Be good to show me her picture,” she said smilingly.

Having handed over his marriage album to her, he went into the kitchen as it occurred to him that he missed his smoke all along.

‘Won’t her manner suggest that she is thinking in terms of picking up the threads?’ he began to contemplate as he prepared some coffee for them. ‘What could be her marital status? Given her rich manner, she could’ve married a well-heeled man. What if she’s either divorced, or god forbid, widowed? But seeing my net worth won’t add up to much why would she marry me now? By any chance, is the idea of an affair with an old flame moving her? If so, what a bonanza it would be with her enhanced allure. Or has she simply come to see me driven out of mere curiosity? Whatever, I shouldn’t be too eager as it’s wise to be once bitter twice shy.’

“Oh, thanks,” she said as he handed her a cup of coffee, “but surely she’s a good looker.”

“It’s no use crying over spilt milk,” he said. “The irony of it all is, having lost your hand; I had to wait so long for a like hand. Maybe, a lesser hand would’ve served me well but that’s about ifs and buts of life. Well, what about showing me the picture of the man you gave your hand to?”

“Why jump the gun, first let’s go to my place,” she said.

“Let me have a shower then,” he said heading for the bath.

While he had his bath, speculating about the possibilities of her current station in life, she leafed through his marriage album all again.

“What about hiring a cab for us,” he said all ready to go.

“Then I’ll follow you on my motorbike,” he said tentatively.

“What if you lose me in the traffic; I’ll be back to square one,” she said smilingly, and added. “So, I’ll take you in my car tied with the seat belt.”

“You can take me blindfolded if you wish,” he said as he led her out of his apartment.

“If you come with an open-mind that would do,” she said overtaking him to reach her car.