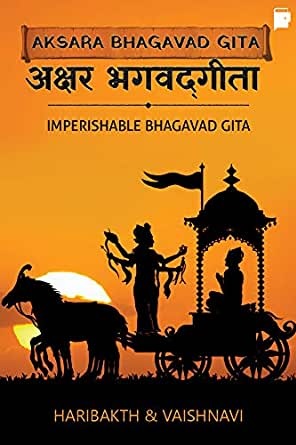 A book on the Gita, which doesn’t interpret but helps interpret by enunciating interpretative principles, substantiating the same and codifying it.

A first attempt on the hermeneutics of the Bhagavad Gita. Enunciating of interpretative principles, application, and its substantiation thereof.

c. ABOUT THE AUTHORS

Haribakth is the pen name under which Ravindra Rao has written the Book. He holds a Master’s degree in Commerce and Bachelor’s in Law from Marathwada University, Aurangabad, India. His basic graduation was from Osmania University, Hyderabad, India. He worked as an IT officer in a State Run Bank for over 34 years.

Vaishnavi holds a Bachelor’s degree in Design from Shivaji University, Kolhapur. The Book cover and the illustrations therein are attributed to her.

Delves into unchartered territory, original, and path breaking. Students of philosophy, religion, Hindu philosophy and hermeneutics can easily discern that the subject matter and the presentation is completely reoriented, radical and has not been adduced or discussed earlier. The logic and rationale put forth in enunciating the principles and substantiating style is also unique. It views the already discussed and commented books on the subject in a hitherto unseen perspective.

Conceptual analysis of the Gita, Identification of the constructs, Variables & Constants, Generalisations and specifications, Adapting legal frame work like Gita citation as ratios, and Events and incidents as case laws, The parameters serving as the mandatory principle of adherence. Spiritual knowledge correlated with mundane branches of knowledge like Management, Science, language/grammar, Logic, Law, etc.

A Must have reference copy for those seeking to interpret scriptures, Students of Religious and inter religious philosophy, Hindu Philosophy, Logicians, Students of theosophy and hermeneutics. An interesting read for theists, agnostics, and those seeking to expand cosmic consciousness, Krishna devotees and Gita lovers, seers who see universal singularity of God of all religions irrespective of the faith they profess.

Transition from chapter to chapter smooth, has continuity and has the cohesive element. Bibliography or sources used/quoted conspicuous by their absence. The illustrations as a separate section does injustice to the book and should have been presented in the relevant chapter.

h. HOW THIS BOOK IS DIFFERENT.

a. All existing books on Gita & the commentaries/purports are based on the semantics and syntax and has leanings of their founder as propagated by their Guru towards any ISM. This book subsumes all isms and lean towards the infinity, infallibility, and completeness of the Gita as inherited by its divine Author.

b. This book substantiates omniscience, omnipresence and omnipotence, independence and infallibility of the Gita, those characteristics having been inherited as a legacy from the Lord unlike substantiating any ism by other books.

c. Being concept based, this book is dynamic and infinitely adapts to changing future scenario unlike the semantic based books which are static and appears irrelevant with changing times and circumstances.

The stated objects of the Author is:

– Endearment to God.
– Author’s endeavour a Yajna, and reaps the fruits thereof.
– Universal harmony and National Integration.
– Presenting a universal template for interpretation, codification of the rules enunciated and its substantiation thereof.

The first and second stated objects are non-verifiable. National integration and communal harmony cannot be achieved by reading or writing a book.The Author has fulfilled the aim and object by presenting a universal template for interpretation of scriptures. Hermeneuticians and Gita Analysts may synergize and fine tune findings from this point forward.

It offers a universal interpretative paradigm to interpret any scripture of any religion, philosophy, or ideology, with in-built checker and auto updater to keep abreast with the changing times, circumstances and values-dynamics.

These and other characteristics of the ideologue/ideology as found hardcoded in the Gita itself is discussed and the underlying principles of interpretation is enunciated. The characteristics of Ideology has been designated Parameters, and have been debated in 18 chapters drawing a parallel with the Kurukshetra War. The substantiation of the principles enunciated takes the form of a debate between students.

Editing the book would enhance its value and readability. Trimming of non-essentials would also help.

The said concepts and its substantiation is brought home by crafting a story around it. Christina is a student of interreligious studies visits Sri Venkateshwara Vedic University under a student exchange program from Florida University. She befriends Haripriya in Gita study group. They share a common bond of seeking truth rather than believe blindly. A debate ensues within the group styled Dharam Rakshak, with each individual espousing their differing ideologies as the only correct version of the Gita to the exclusion of any other version. The efforts of Haripriya in reconciling their differences turns counterproductive and unite all the factionalists against her. The duo Haripriya and Christina initiate a debate under the watchful eye of Justice Parthasarathy. Therein, Haripriya puts forth her new paradigm which subsumes all the existing isms of the Gita. She puts across parameters which play a determining role in interpreting the Gita, which could equally serve well in interpreting any scripture, ideology or philosophy. She has scoured Gita and identified the parameters. In course of the debate other issues crop up. Besides enunciating, she substantiates her claims even while resolving other cropped up issues.

During the course of the debate, Justice Parthasarathy gets embroiled in a mental and ethical conflict, between his faith, values and impartiality, forcing him to evaluate his ingrained beliefs and faith in the light of arguments put forth by his students. Similarly many readers/students are forced to rethink on their beliefs and understanding, notwithstanding the peer and environment indoctrination. The professor realizes the massive missive of his students and doubts if he or any individual could sit in judgment over the divine judgment. He works out a spiritual equivalent of a judicial grand jury by convening an Omni Jury and co-opting all the readers and Gita lovers to deliver their judgment, by putting the book in their/your hands.