A Book to be Chewed and Digested

Here is a book to be chewed and digested, not to be just tasted or swallowed. 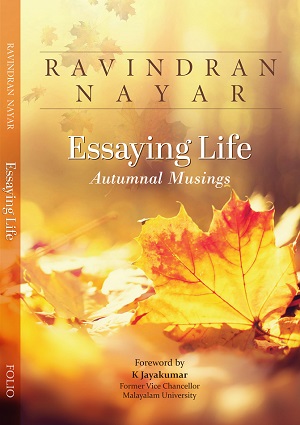 “Essaying Life” is a collection of articles written by Ravindran Nayar over a couple of decades, containing his reflections on many matters, mundane and spiritual, looking at life from the perspective gained by long years of experience. It is his “autumnal musings” as the subtitle tells us.

Autumn is the season of “mellow fruitfulness,” when nature is at its colourful best, with its various hues and tints (all too evident in this part of the world where I am living now). It presupposes a preceding a summer, a season of growth and development and the still earlier spring, the budding and burgeoning season. And that precisely is what we find in this book: mature and plentiful reflections, the gathered fruits of a lifetime – a rich fare, beautifully laid out.

Within the covers of this thick volume are essays on various topics ranging from the spiritual to the anecdotal, divided into definite sections. The author has foregrounded the essays on spiritual matters. Those are issues that seem to have vexed him a good deal, of late. The blind faith of his youth and middle age is gone; he developed “an ambivalent stance;” and now that too is gone. He no longer has faith in a personal God. The Krishna he once adored now comes under his close scrutiny; he blames him for his failure to prevent the terrible Kurukshetra war, and faults him for the subterfuges he adopted to win the war for the Padavas and the way he dealt with the mighty warrior, Aswatthama. Rama, too, has fallen short in his assessment. Not everyone will agree with these views. Should the authors of these epics have written a different narrative? Homer has nodded, we know, but Valmiki and Vyasa were more than poets; they were sages who saw life steadily and saw it whole. But this is not the place to elaborate on the subject.

If there is no personal God, is there a power, a superior force, that governs the universe? In this context the author has dealt with the Hindu concepts of Paramatma and Atma and has propounded a breathtakingly simple theory that the Paramatma is the air containing the life-giving oxygen that envelopes the world and the Atma the air we breathe, both essentially the same as in the Advaita philosphy.

Ravindran Nayar grows nostalgic, and waxes eloquent, when he writes about his college days, his college mates and the great teachers whom he admired in those days: C P K Tharakan, Dr M Manuel, N A Karim, Hridayakumari, G Kumara Pillai and, more particularly, the multi-faceted Ayyappa Paniker. C P K Tharakan, with his “booming voice” had been Principal of Government Victoria College, Palghat when I was a PG student there, and had taught us Shakepeare’s Hamlet. As for the others, I happened to know some of them later. I met Kumara Pillai a couple of times when I was First Member, Board of Revenue in charge of the Excise Department. He was heading the prohibition movement at that time, and had a word of praise for the way I wrote my orders in excise cases. I met Ayyappa Paniker when I ventured, rather late in the day, into English poetry. He used to preside over our monthly meetings, gracefully, and was a great source of encouragement to me.

I am impressed by the author’s “Literary Shelf.” There are sparkling gems there, speaking volumes for his erudition and ardent love of literature. Who else at this age would quote so profusely from Spenser, Shakespeare, Marlowe, Elizabeth Barrett Browning and other stalwarts of English poetry – and also from the giants of Malayalam literature? The author is so fond of quotations and so you find them, sometimes large chunks them, liberally interspersed in most of the essays. The book is, as the old lady said of “Hamlet,” full of quotations.

There are essays here on other art forms like Kerala’s trade-mark Kathakali and Kutiyattam, and also western classical and country music. The author has written on these subjects with knowledge and evident enjoyment. Social and environmental issues, too, have engaged his attention. He decries undesirable tendencies and condemns failures on these fronts. And the apportioning of blame is even-handed.

What appealed to me most is the section called “Memoirs” and in that section the most touching piece is the one that deals with the illness of the author’s wife – a litany of woes: wrong diagnosis, wrong decisions, botched brain surgery and medical misdemeanour, and the final surgery that brought some relief. It is a blow-by-blow account of a series of searing experiences and emotional traumas, graphically told. There was much suffering, much of it caused by medical negligence, and there is continued suffering. There is also a piece on his son’s heart condition which caused a lot of distress but could be corrected with an operation performed by a noble surgeon in Australia.

I have known Ravindran Nair for the last many years. There was a time, not long ago, when a small group of friends used to meet in my house, once a month, to read and discuss our writings. Ravindran Nayar was there, gentle and sparing in his comments, but his comments, whenever he made them, were always insightful. We did not know that he was writing such memorable pieces in those days. Reading these essays has been, for me, a delightful experience. And these essays are not only delightful; but thought-provoking too. I have gone through them, and pondered over them, piece by piece. It was cut-and-come-again, and it would be.