Holidaying at the Finger Lakes and the Niagara

Browsing through photographs and videos without any doubt brings along pleasant memories of famous holiday destinations with loved ones. More so, after the pandemic has forced most of us to resort to self-devised virtual tourism for a while now.

Glancing through the magnificent images brought along the immersive experience of the exhilarating vacation in the autumn of 2017. The grandeur of the Niagara Falls, and the Watkins Glen State Park in quite inexplicable in words; the captivating scenes have emboldened me to relive the experience - the unforgettable weekend sojourn to the Niagara Falls from Jersey City. 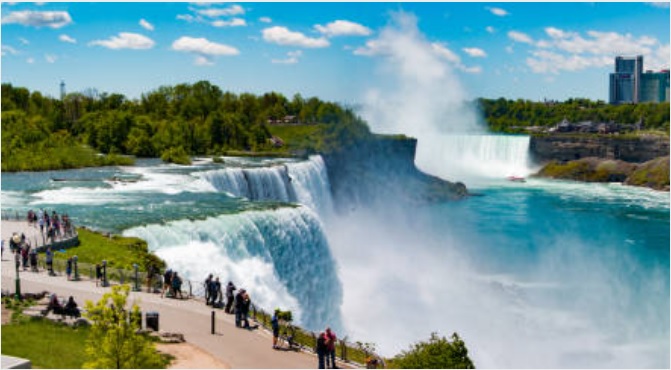 Commencing on Friday evening, the long drive of the 700+ kms. was shared alternately by two skilled people – our daughter and son in law. Not just the drive, their meticulous planning enabled us to have a peek into some of the most spectacular sights enroute to the Niagara.

After about four hours we checked into Ramada Painted Post, Corning, for the night.

On Saturday morning, we left early and took time off to spend a few hours at the crown jewel of the finger lakes aka Watkins Glen State Park, which boasts of its ‘breathtaking’ waterfalls and gorges – not in vain!

The two-mile hike past 19 waterfalls and over 800 stone steps was amazing, and the astounding sights all along left us all asking for more. My husband, the avid photographer did have a tricky time, lugging along the camera and other equipment on his back, but we managed it well with occasional breaks; on our return, took the shuttle back to the entrance.

The images in frames offer a glimpse of the astounding trek alongside the gorges, into tiny caves, besides waterfalls, ferns, conifers; the tranquil moments in the lap of Nature were humbling and mind boggling. It always will remain so.

Our next halt was at the Corning Glass Factory. After soaking in Nature’s marvels in the first half of the day, the next half was spent in going around the exhibits, watching a live glass making show where master ‘gaffers’ (glass makers) created a piece of art, that was both educational and inspiring.

According to Wikipedia, The Corning Museum of Glass is a museum in Corning New York,dedicated to the art, history and science of glass. It was founded in 1951 by Corning Glass Works and currently has a collection of more than 50,000 glass objects, some over 3,500 years old.

The ‘aha moment’ at the first glimpse of the Niagara from the American side around dusk was an experience of a lifetime. From the American side, the three parts of the Niagara- Horseshoe Falls, Bridal Veil Falls and the American Falls cast their spell upon all. Time stood still as we, along with hordes of visitors drank in the gorgeous scene; while the waters foamed, our hearts gushed with emotions, eyes welled up with tears of joy. All the while, my husband’s camera was clicking non-stop. This was his second visit (his first was in the early 80s!).

The boating experience in the double deck Maid of the Mist, with ‘rain ponchos’ was even more humbling, as the boat ferried squealing and beaming passengers through the voluminous sheets of water past the base of the Falls and massive rock formations.

Our night halt was on the Canadian side. We had visas to the US and Canada, so after the formalities were complete, we drove and checked into the Travelodge Falls View Hotel in the evening. Not wanting to waste time, we headed out for a long walk, in time for the spectacular lights over the Niagara. The chill autumn wind was unable to send us indoors, we braved the cold and walked on the Rainbow Bridge.

The following morning, another bonus was the boating ride on the Hornblower, which was followed by walks, soaking in the magnificence from various spots. We’d heard that the Canadian side is the more glamorous side of the Niagara Falls, true, but in my humble opinion, both sides have their distinct spectacular sights that entices every visitor.

The return journey was quieter. I do recall the ‘Buddha’s bowl’ lunch that we had at Rochester, followed by a yummy vegan dessert, whose name I do not recall now.

I do look forward to another trip to these magnificent places, sometime after the pandemic ends. Until such time, the photographs would prove to be the next best to ‘real travel.’