The only two poets I could associate with the English Department of the University College, Thiruvananthapuram, were Dr K Ayyappa Paniker and Prof G Kumara Pillai, both of whom had achieved hallowed fame as path-breaking poets in Malayalam in the 1960s when I was fortunate to be a student there.

But long before their stint at the College there was a Lecturer, or perhaps Professor of English, Uma Maheswar, who published at least one volume of poems in English. There used to be a portrait of Uma Maheswar in the General English classroom in the main block of the College, indicating that he had served either as Professor, or even as Principal,  but none of us had heard of him or read about him. He never came within our ken. 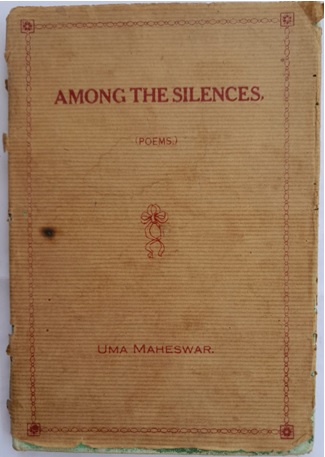 It therefore came as a surprise when an old collegemate, Jayapalan, couriered me; a thin, time-worn volume of poems by Uma Maheswar, published as early as in 1928, which means that the book’s centenary is just six years from now.

Titled Among the Silences the 50-page volume contains 14 poems through which the poet unburdens “a heart laden with the infinite of anguish.” Almost every poem is sombre, sad and reflective of the anguish with which many pass-through life. It is beyond understanding why there was so much of sadness in this anthology and not a sprinkling of poems reflective of the sunny side of life. The only exception to the pensive tone is the poem titled ‘The Magic Valley.’

Perhaps the poems could be better understood and appreciated if something is known about the life of the author. Jayapalan, who got the book from the author’s son, his primary school classmate, several decades ago, could not much enlighten me on this. That old classmate had passed away long ago.

Even the opening sentences that Uma Maheswar wrote as the Foreword to the collection set its sombre tone: ‘Silence is a vast kingdom. Beyond the sunset and the crowded array of amber clouds, where the sea moans not, nor is the tumult of the tidal clash heard, known only to the stars that burn like drowsy smokeless tapers in the marches of that kingdom is the abode of that Mysterious Spirit.  Queen Oblivion reigns in that court of hush where sweet unheard melodies are languishingly sung to her inner ear.’

‘Lyric wail,’ ‘dirge of the dying swan,’ ‘sobbing eves’, ‘cosmic pain,’ ‘lingering plaint of autumn woe’ are among the choice imageries he tries to conjure up in his doleful Foreword. The titles of the poems are also pointers to the angst and the anguish, the despair and the desolation that he seeks to convey through his poems;  Broken-hearted, The Lord of Silence, The Burden of Shame, The Flower Wreath, The Court of Hush, The Great Funeral, The Blood of the Martyr, The Betrayal of Spring, The Autumn Woe........

In the last mentioned he laments:

All the age old sorrows quicken in me,
The hoary sadness of the hoarded past;
Day by day the earth lovelier becomes
Full of the sweet, sad things that have been once.

Why was the poet so sad as to almost fill up an anthology with such imagery, imagery reflecting heartache and heartbreak, distress, suffering, an all pervasive sadness?

Prof P Seshadri, Principal of the Sanatana Dharma College, Kanpur, who wrote an Introduction for the anthology, also noted the permeating pathos of the poems. He said: ‘In wishing him a bright future in the literary world of India, let me only express the hope that his poetic vision will flash more and more to us the inexpressible joy and beauty of this world.’

Did Uma Maheswar heed to this sound advice from the learned Professor? No idea, as nothing much is known about him, even whether he has published any more anthology.

So, till more information on him is received this poet from the English Department of Thiruvananthapuram’s University College will continue to remain a mysterious literary figure, as mysterious as the ‘Mysterious Spirit’ he mentions in his Foreword.