Full many a gem of purest ray serene,
The dark unfathom'd caves of ocean bear:
Full many a flow'r is born to blush unseen,
And waste its sweetness on the desert air.
–– Thomas Gray in

Elegy Written in a Country Churchyard

Keats died at the age of 25, Shelley at 29 and Byron at 36. Keats died of tuberculosis, Shelley met his death in a boating accident and Byron died of illness contracted during his participation in the Greek War of Independence from the Ottomans. 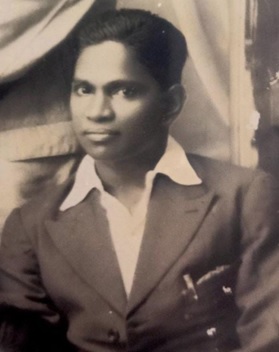 Like these highly romantic 'Romantic Poets,' Thiruvananthapuram’s Uma Maheswar, who stood out and stood apart with an amazing poetic craft during the pre-independence days, also died early, at the age of 38, in a tragic road accident in 1941.

Death snatched him before he reached his prime, both prime  of his life and of his singularly intense and impassioned poetry, most of it lamenting, as the Bard said, ‘the slings and arrows of outrageous fortune,’ and even reflecting a constant death-wish.

Uma Maheswar who joined the English faculty of Thiruvananthapuram’s University College   affiliated to the then Travancore University, in the latter half of the 1920s, soon established himself as a poet in English, perhaps the first poet in English from Travancore. His maiden anthology, brought out in 1928, was “Among the Silences,” a lyrical outpouring that, according to him, lays bare “a heart laden with the infinite of anguish.”

Eminent litterateur Prof S Guptan Nair, who wrote a touching tribute to Uma Maheswar, said this initial anthology was followed by three more memorable collections, “The Feast of the Crystal Heart,” “Lay of the Lotus” and “Southern Idylls.” In all of them Uma Maheswar displayed an enviable mastery of the language and exquisite linguistic imagery, something that his students and readers found truly amazing.

Prof Guptan Nair also pointed out that one of Uma Maheswar’s poems was included in a prestigious anthology of poetry published by The Mirror Press, London, in 1929. This was indeed a rare honour and evidence to his acceptability as a poet by the literary fraternity abroad.

Both Prof Guptan Nair and Prof P Seshadri, who wrote a scholarly Introduction to the first volume , however, noted that what marked Uma Maheswar’s poetry was melancholy, a permeating streak of the agony of living which found expression in most of the poems. The exception was the last volume, “Southern Idylls,” which brought within the ambit of his poetic vision the idyllic landscape of his homeland.

That apart, what could be the reason for the sustained melancholic strain in his poetry? Prof Seshadri said it was no small credit that he “unburdens his sorrow in words which have a lingering sweetness and go to the very hearts of his readers.” It is perhaps foolish, he said, even on the part of poets to lull themselves to sleep in an unreal world of happiness, forgetting the grim problems of life around us. “But should a poet forget entirely that one of his primary duties is to diffuse gladness like Shelley’s Skylark and enable his readers to see the perennial beauty of nature and human life?” he asks.

Prof Guptan Nair, who shared this view, however, said it was unlikely that the circumstances of the poet’s life, and the unprovoked blows and the unexpected upheavals, did not find a reflection in his poetry.

And what were the circumstances of his life that possibly influenced his poesy in a predominantly negative way? In this, a lot of information on the personal life and career of the poet had been gleaned by Prof Sharat Sundar Rajeev of the Thiruvananthapuram Engineering College, a conservation architect and an avid collector of heritage artefacts.

Just a few days after the publication of an article on the poet, prompted by an old collegemate, Jayapalan, who sent me  a copy of the 1928 collection, Sharat came up with a meticulously preserved copy of The University College Magazine for February 1943, containing Prof Guptan Nair’s scholarly article on the poetry of Uma Maheswar and a ‘Lycidas’ like elegy on the poet written by one of the doyens of the literary world of the time, Vidwan C I Gopala Pillai.

The elegy was read out by Gopala Pillai at a function held in the college to mark the unveiling of a portrait of Uma Maheswar by the Pro-Vice Chancellor of the Travancore University. The portrait was unveiled on February 19, 1943, two years after the tragic bus accident in which Uma Maheswar was killed.

Sharat could also get some information on the bus accident from some of the present generation members of Uma Maheswar’s family. The family lore was that he was returning from Kottayam after examination work and was clutching a packet containing answer sheets. Seeing him standing at the back of the bus, a student travelling in it reverentially offered him his front seat. Fate had its strange designs as shortly thereafter the bus met with an accident, killing Uma Maheswar. The student was unhurt.

Apart from his academic and poetic pursuits, Uma Maheswar was involved in active social work relating to the Viswakarma community. And it was to the daughter of a titan of the community, occupying a top position in the Maharaja’s government, that he got married. Unfortunately, the marriage was short-lived on account of what would now appear to be a ridiculously silly matter. But ridiculously silly matters matter in life, he learned the hard way.

It appears that one day Uma Maheswar failed to get up when his father-in-law entered the room. This was construed as a deliberate slight that the grand patriarch could not condone. He asked him to leave the house. And Uma Maheswar promptly left, never to return.

He re-married later and had children from his second wedlock, but was the first failure haunting him till the end of his life? Probably yes, as his first matrimonial break seems to have a direct bearing on some lines of his poems. In many poems he is seen as a tender-hearted person, perhaps fickle minded, unable to come to grips with the utter meaninglessness of life or the heavy burden of sorrows thrust upon him.

Even dubbing himself as a ‘pest,’ he said he had no place in this world to turn to.

‘God gave me a burden of sorrows,
He gave me a heart full of ruth......’ he says, adding
He sent me a sigh for a friend
And a blissful woe for my bride.

In spite of the persistent presence of a heart-wrenching ache from the past, he brought out his last volume, “Southern Idylls” (1940), in a positive mood that projected him as a nature poet at his best. The beauty and the colourful variety of the landscape of his land came in for great brushstrokes from him in this collection.

I built a dome of coloured dreams
And hope’s red radiance rayed around
The magic of a thousand tunes
Like sounding perfume filled the air.

Sounding perfume? I was initially confused by that expression, but after much reading found that perfume makers really speak in terms of creating an ensemble. There is harmony in a fragrance and scents are described as notes, chords, accords etc. Music and perfumery do really have many things in common, it seems.

Uma Maheswar’s description of the sights and sounds of the land is eloquent at times, sometimes soft as a feather touch. See the beauty of a little chirping squirrel softly gliding over plantain leaves to drink nectar from the cone:

The tall plantains in the dale
Have sprouted forth their ruddy cones
And the lithe squirrel over the leaves
Comes chirping to its honeyed drink.

It is said that many poets had premonition of their deaths and noted down lines indicating their end. In the case of Uma Maheswar there were indeed many poems which could be described as, indirectly at least, expressing a death wish. And the last poem that he wrote did in fact mention death and parting.

In the poem ‘There We Parted—My Brother and I’ he gave different dispositions for the two siblings and said:

He carved an empire at the point of the sword,
I wandered and wandered with a song in my head
And made out a marvel with a wondrous little world,
And I fell down at last, and soon I was dead.

Prof Guptan Nair said he was not presumptuous enough to place Uma Maheswar in the company of poets like Shelley and Keats. In fact in some of his poems there were veiled reflections of imageries from Shelley and Keats. But that apart it goes without saying that there was that poetic spark in him. And that was enough potential to fire the imagination.

If death had not snatched him at such an early age, would Uma Maheswar have grown big as a poet all people revere?