The New Dawn: Stories of Life 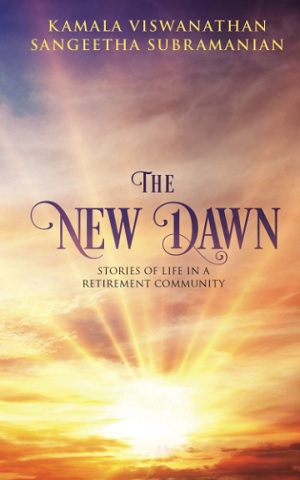 The mother-daughter duo, Kamala Viswanathan and Sangeetha Subramanian have penned these fourteen short stories in "The New Dawn", which dwells upon life in a Retirement Community.

Each story is set at a steady pace, laced with emotions, introspection and clarity of purpose with a positive note. The unique feature of the layout is the various quotes picked up from stalwarts across the globe, which, in essence, provides the base for each story.

Niramala, the grief stricken mother, on the loss of her three month child, wades through  without any meaning in life. Nearing retirement, her husband Venu, decides to move to a retirement community, along with his unwilling wife, Nirmala. She leads a secluded life in the community, till one day she chanced to see the gardner's child, watering the plants and a spark lit up in her. She takes an immense liking for the boy and adopts Ravi, who started addressing her as Amma.Nirmala soon finds a meaning in life that transforms the protagonist in 'Gratitude'.

'A Woman's Identity' dwells on how Seetha, a bright and ambitious young girl had always been swayed by the opinions of elders and as a wife was never asked for her views, moved over to a retirement community in the later part of her life  Over a period, she was nominated as the head of the Activities Club in the community. She soon realised she was the original Seetha. Not a submissive wife, not a daughter in law, not a mother. Just Seetha.

Two sisters, Anitha and Shivani, facing the neglect of their children due to their pressing priorities, unfazed, decide to start a retirement community in 'The Gift', instead of ranting over the treatment meted out to them by their children.

The tales of sorrow narrated by some of the inmates of the retirement community, consequent to which they had moved into the community, made Vimala and Nagarajan realise their folly in their shoddy treatment of their daughter and grand daughter and how they make amends to forge a bonding, is well brought out in 'Beauty is Skin Deep'.

How magnetic are family ties and love is very well portrayed in 'The House of Love', where the daughter, Suneeta, whose parents Babu and Anjali had moved to a retirement community, returns back to India with her family, from the US, to support her aged and ailing father, on hearing of the demise of her mother.

In 'Roles Reversed', the son Satish returns to India to support his parents Natesh and Nalini, who prefer to stay back in the retirement community, not willing to leave their close friends.

Music could be the soothing balm that forges a relationship that could blossom later into a lasting bond.Prakash and Kasturi experience this at the retirement community in 'New Relationships'.

The authors touch the emotional chord in 'Motherhood', where estranged couple meet at the retirement community after fifty years. Lakshmi, after listening to the events gone by, accedes to the request of dying Cheenu, who hands over the custody of his child, Estella, through remarriage to Stella, who later died in an accident. A very touching story, no doubt.

The chance reunion of friends, Seema and her less privileged Meena, the daughter of the cook, through retirement community is well chronicled in 'Full Circle'.

The clarity in playing her second innings, where the mother of two daughters, bequeaths her home to Bala Seva,an orphanage and moves over to a retirement community, which the daughters in the US endorse, in 'A Birthday to Remember', adds another dimension to the narration.

The bonding between the siblings, Hari and Mukund, where the elder, Hari, sacrifices his life to ensure Mukund becomes a specialist in orthopaedic is the base. Mukund helps provide mobility to Satish by designing a prosthetic leg. Satish in turn sets up a retirement community, where Mukund volunteers his service on part-time basis. Mukund also succeeds in convincing Hari to move over to the retirement community This is the essence of 'Love Comes Around'.

How Renuka, a housewife,  turns her passion for ladoo making, especially Boonda ladoos, into a venture, with doors opening in a retirement community forms the main theme in 'The Sweet Connection'. A sub plot to be savored, comes as a breath of fresh air to make it sweeter.

The message how a good environment and a cheerful neighbourhood could transfer the life of an individual is brought out tellingly, in 'New Doors Open'. Matangi was devastated at the twin disasters that struck her doorsteps - her husband and son being washed away in the Tsunami and her subsequent miscarriage. Grumpy Matangi moves into a retirement community but prefers to remain aloof, until a chance exchange with the inmate Padmaja, makes her realise how wrongly she had blamed life all along. Hence forth she resolves to stay positive which brings out a perceptible change in her attitude to life.

Poornima, who moved away from her home in frustration due to constant ill treatment, to her grandmother's place, where she comes to know that her estranged mother was not her actual mother . She soon settled down with Vijay to run a retirement community. After many years, her step mother calls her and seeks her support. Poornima gladly obliges with affection and kindness overflowing and accommodates her in the retirement community, in the concluding story 'Of Sons and Daughters '.

To sum up, 'The New Dawn' provides valuable insights and food for thought in the life in the Retirement Community. These stories, I am sure, would act as a sounding board for those contemplating a move to the retirement community.

I close with my best wishes to the authors to cross more milestones in the years to follow.