Once upon a time there was a little boy named Luv who lived with his parents in Delhi. His mother Alka and father Ashok were well placed in life and had all the comforts of life available to them. However, there was one problem. They used to fight over small things. His mother was argumentative and father egoistic. If one was motor mouth, the other loudmouth. Every day they would find a topic to quarrel on. And, if there was none, they would invent one. All this was taking a toll on him. Often he would withdraw to his room and sulk all by himself. Unfortunately, none of the parents noticed this enough. 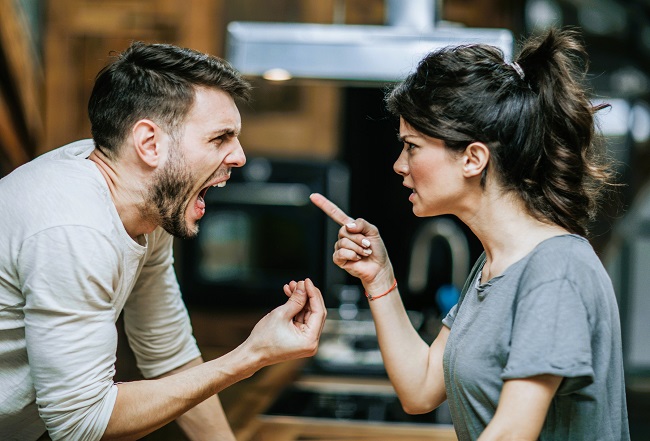 One day the fight at home acquired violent proportions. The argument started as usual over a small issue. There wasn’t enough milk for tea. Alka refused to become quiet. Ashok landed a tight slap on her face. She lunged forward to attack him but before she could clutch his hair, he pushed her back with all his might, making her land backwards on the floor. Infuriated, she picked up a stick and started giving blow after blow on Ashok’s legs. He shrieked in pain but there was no stopping. Luv couldn’t see all this. Trembling in fear, he ran out of the house and slipped into the woods by the house.

He ran and ran till he could run no more. Finally he settled down under a tree by the lake and resting his head on his knees, started sobbing. A long time passed before he could quieten. While he was staring blankly in the distance, he felt a tender tap on his shoulder. He looked up.

It was a bearded young boy with a smiling face who gently asked why he was crying. Luv could not bring himself to say anything, instead he cried more. The stranger introduced himself as Swastik and said he had a magic solution to every problem of life.

“Can you make my life happy?” Luv asked innocently.

“Oh, yes, with a click of my fingers,” Swastik replied making a click sound by joining his index finger with thumb and continued, “My solution is a panacea for all problems!” Luv was too young to notice the crooked intentions behind the help. Swastik yanked a syringe and tiny bottle from his pocket and flanked it before the lad’s eyes. “This water will make you happy like never before.”

Luv cringed to see the needle. “No, no. No injections for me please,” he moved back scared.

“Okay, no problems. I have a capsule also with me which has the same effect.”

“Capsules choke me,” Luv objected. “Don’t you have any sweet tablet?”

“Oh, yes. I do have one. But it is at home and I shall get it for you tomorrow. Will you come to meet me tomorrow?”

“Sure, same time same place,” Luv jumped at the idea.

Talking to Swastik was such a relief. Luv eagerly waited for it to get the next day. The following evening, he ran to the woods to meet Swastik by the lakeside. Swastik, as promised had brought the tablet with him. He had brought water too so that Luv had no difficulty in swallowing it.

The pill had a numbing taste. However, once it was inside him, all his worries were out. There was a flush of energy in him, so much so that he suddenly felt charged all over. All the gloomy slush was gone in a moment and he felt light as feather. Soon he was laughing away to glory, as though flying in the open sky.

The boys did not notice a woman sitting faraway on a bench who was eyeing them stealthily. She was in loose wraparound clothes, shaggy and frayed. A layered piece of headwear covered her face too, leaving only a slit open for the eyes. The boys, completely oblivious of the watch, were talking loudly as though in a state of trance. Promising to meet the next day, they parted.

Next day, Luv was at the woods again at the exact time but Swastik was nowhere to be seen. He waited for a while and then noticed the woman in rags. He approached her and asked if she had seen Swastik Bhaiya anywhere. She replied, ‘no’ but offered help in finding him. Leading him by the hand, she walked in step for some distance. Alo! What did they see! Swastik was standing clutching a tree and a police man was giving him lathi blows on his bum! Poor Swastik was yelping in pain with each whack.

Luv was taken aback at the sight of Swastik bhaiya getting beaten. “Why?” he asked Mai. The woman quickly turned his face away and walked him back to the bench explaining Swastik must have plucked flowers from the park. He was a thief and it was no good crying for a thief. Luv believed her but was visibly sad.

“Mai, Swastik Bhaiya was to give me a tablet for happiness today,” he confided.

“Oh, that’s the reason you are so sad. Well, I can also give you medicine for happiness. Do you want one?”

Luv stretched his little arm and Mai placed a little iron ring on his tiny palm.

“This is a magic ring. Wear it on your left hand’s thumb just before sleeping and you will get wonderful dreams. Whatever you wish in life, will happen in your dreams and you can be happy as ever,” Mai said.

“What about real life? Will my parents ever stop fighting?”

“Let them fight. They are fools. Don’t pay any attention to them. Whenever they fight, just find a silent corner in the house and sit down with your books. But, don’t forget to wear this ring before sleeping. And, you must hide it from everyone. Agreed?”

Luv nodded, kissed her on the cheek and ran away happily. That night he found his parents quarrelling over some issue. He ignored them totally and quietly slipped into the bed wearing the iron ring. He did get really sweet dreams. He visualised he was playing in a green meadow where there were many children and lots of swings. He played to his fill for hours. There were lovely pups and hairy kittens around. When he woke up he was so happy and light.

After school, he couldn’t wait to meet Mai at the woods so that he could say a big thanks to her. He was a bit earlier than his usual time. He spotted Mai sitting on the bench with her back toward him. Her body was trembling gently. Luv went around to look at her face. She was weeping silently. Seeing Luv appear before her suddenly, she pulled the cover over her face and wore a cheery smile. “So, did you get nice dreams?” she asked.

Luv went ga-ga over whatever he had seen in the dreams. Then he suddenly remembered something and stopped over. “Mai, why were you crying? Are you sad?”

After much coaxing and insistent requests, she narrated her story. She had a young son who was very good looking and cute. But now he was long asleep under the mother earth. His fault was that he had fallen addict to the tablets that make one happy.

Luv listened carefully and then shifted close to her so that the touch of his tiny body could pacify her a little bit. Finding she was still blankly staring at the horizon, he slowly crept into her lap and lay there resting. Mai was suddenly flushed with emotions. A flood of tears took over her. She pulled the boy tightly to her bosom and cried bitterly.

If she was his solution, he was hers.