The Fading Phase of Travancore Monarchy 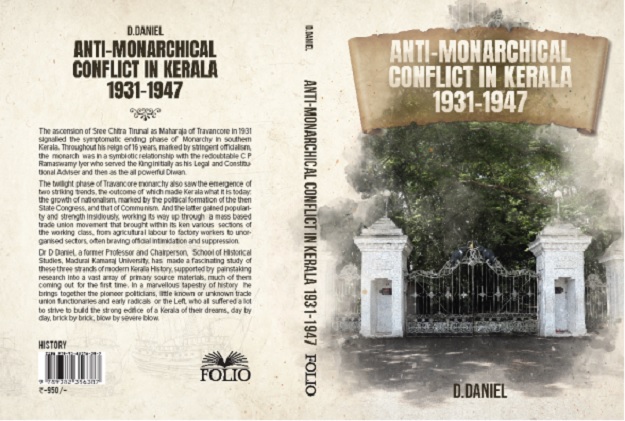 History is fascinating, especially when it deconstructs or when one looks at it from another angle, or from the other side. For generations of school students, like mine own, in the middle decades of the last century, History of Travancore (and that of the bejewelled Maharajas and Maharanis) meant nothing more than what C V Raman Pillai wrote in his famous novel trilogy beginning with Marthanda Varma, a literary classic that fed a whole society with historical falsehood. It was much later when maturity blossomed and wisdom dawned that those generations became aware that there were other historical narratives as well, far better and truer, than what they had been spoonfed with all along.

What is true in the case of the beginning of royal hegemony in Travancore in the 18th century equally applies to the fading phase of Travancore Monarchy, marked by the 16-year reign of the last Maharaja Sri Chitra Tirunal Balarama Varma, in tandem with a ruthless, megalomaniacal and autocratic Diwan, C P Ramaswami Aiyar.

There were many in Kerala who saw CP as an astute politician, able administrator and a visionary statesman, all rolled into one. Even the Nair Service Society (NSS) at one time, perhaps for its own reasons, was so supportive of him to the extent that it donated a bust of CP for installation in the Sri Mulam Assembly.( The bust was later removed when Parur T K Narayana Pillai became Chief Minister of Travancore-Cochin state).

Even the eminent historian Prof A Sreedhara Menon, in his extremely well written book ‘Triumph and Tragedy in Travancore: Annals of Sir CP’s 16 Years’ gives him credit for many things, administrative and political, that he did during his stewardship of Travancore, including what is touted as his parting advice to the Maharaja to read the writing on the wall, for a change, and join the Indian Union. I for one had always taken Prof Menon to be the last word in historical veracity. But was he?

Dr D Daniel, a former Professor and Chairperson, School of Historical Studies, Madurai Kamaraj University, does not appear to agree with Prof Menon at all on his assessement of CP’s contribution. In his excellently documented book Anti-Monarchical Conflict in Kerala 1931-1947, replete with quotes from a mind-boggling array of primary sources, he argues that there is no justification whatsoever for giving CP any grace marks for his disastrous stewardship of Travancore.

He says: “Prof A Sreedhara Menon’s Triumph and Tragedy in Travancore adduced critical evaluation of historical interpretations. Non-chronological and non-continual in the portraiture of events, this work seemed to be a compendium of socio-political anecdotes, connected with CP Ramaswami Aiyar’s diwanship. It conveys the illusion that the latter’s sixteen years of officialdom appeared a half-way mark triumphant. The historical course supported by an analytical perspective would desist an objective student of history from attributing such a credit to his officialism.”

“To cite an example,” Dr Daniel says, “the Travancore State Congress submitted a memorial and memorandum to Maharaja Sri Chitra Tirunal on 30 May 1938 making a bundle of allegations against CP’s administrative style. Instead of constituting an enquiry commission to disentangle himself from the charges, the Diwan conveniently jailed the signatories on sedition.”

Dr Daniel asserts that CP could not be credited with descriptions such as “a far-sighted or triumphant official” as he was extemporaneous, transitory and expressive of tragedy.

“When General Dyer of Jallianwallah Bagh tragedy can be called a tyrant of the last order, the perpetrator of Punnapra-Vayalar holocaust cannot be exculpated from the crime, because Diwan Ramaswami Aiyar contrived military command as General and directed the army personally. Sticking on to his utopian manoeuvres until an assailant’s attack on his life, the Diwan trod over the popular will. The combined fight of the State Congress and the Communist parties at the fag end of this historical course in 1947 highlights the falling standard of his diwanship. The researchers on various connected trends and themes may be the best judges for any certification to such a top official with colourable and hidden socio-political mentality in a more enlightened Kerala.”

The book makes a fascinating study of three important strains of political development in Kerala in the runup to Indian independence: the fading phase of Monarchy and the slow but steady growth of Nationalism and Communism in Travancore, Cochin and British Malabar, as represented respectively by the State Congress and the Communist Party. The book makes an enormous display of primary source materials, in a way that has never been done in the past in respect of the research period, including the whole gamut of secret official records preserved in the cellar of the government Secretariat.

The book, brought out by FOLIO, Thiruvananthapuram, is slated for formal release at the South India History Congress session at Dindigul, Tamil Nadu, on August 26.