Amidst the Coconut Palm

A friend of mine invited me to his farm in a village in Tirunelvelli, to herald the New Year 2023. My eyes widened in awe, as we marched through acres of well laid out farm with rich greenery, laced with a variety of fruit trees like coconuts, mangoes, guavas and sapotas, to name a few. My friend explained to me the basics of agriculture on how he has been nurturing the farm over the years, as he shepherded me across the vast terrain of rich green cover. 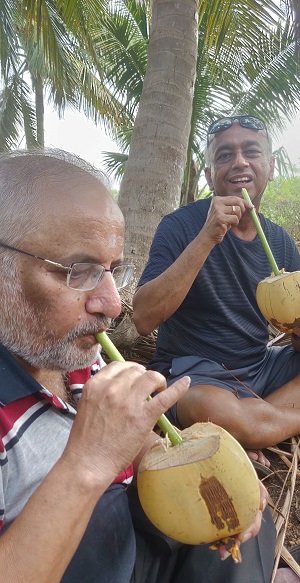 After a few kilometers, enjoying my communion with Nature, we sat down to relax under the shade of the coconut trees, mesmerized by the cool breeze flowing across the palm trees. We seated ourselves over a sheet of green palm leaves on the ground.

The manager in charge provided fresh tender coconut water, together with a green nature given straw. In this case, it was the stem of the papaya leaf, with a broad inner opening that served as a straw. Very innovative, I remarked, to which my friend smiled. It was a pleasure to taste the sweet tender coconut water, flowing through the Nature given green straw. It generated a "feel good" effect to relate to Nature and appreciate its fresh bounties.

I was quite eager to enrich my knowledge from my friend on how the yield is so good and whether it is sustainable. His eyes lit up and he explained to me in detail on how he maintains the trees and the resultant yield out of the trees.

He said that in the month of May, one kg of a mix of groundnut cake and DAP of equal proportion (50%) is placed in the pits created near the roots of each tree and then covered with sand. Before the onset of the monsoon in September, 20 kgs of cow dung with 4 to 5 kgs of hen/cock droppings, (available at government stores), is placed in the pits dug out near the root of each tree and then covered with sand. After monsoon, about 1 1/2 kg of mixture of inorganic matter consisting of Urea (20%), Potash (10%),DAP (60%) and neem cake (10%), is placed at the pits around the roots of each tree. If DAP is not available, it is replaced by NPK (17/17/17) or NPK (15/15/15). In such cases Potassium can be dispensed with.

As a routine, on the first of every month,3G insecticide of 10 gms for each tree, is sprayed at the sprout of each small tree. For the big trees, a V shaped cut is made on the trunk of each such tree and chemicals are injected through a gun. 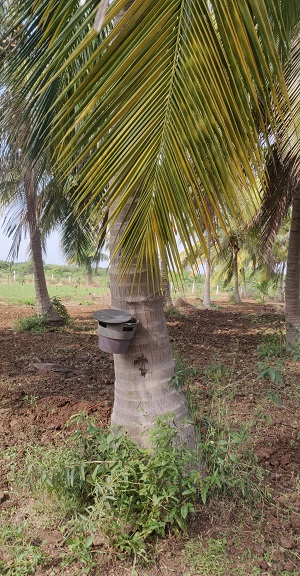 In addition to this, efforts are taken to keep the surrounding clean, by removing and burning all dead coconut trees and all immature nuts fallen due to mite infection, in the farm, which are likely to serve as breeding ground for beetles and other pests.

The plantation has to be strictly guarded from pests, the most common being Rhinoceros Beetles (Oryctes rhinoceros), which create havoc by boring into the unopened fronds and spathes, which result in 10 to 15 % loss in yield.

The beetle population is maximum during the quarter June - September, coinciding with the onset of the monsoon. The damage to the trees can be detected through holes in central spathes or holes with chewed fiber sticking out in central spindle. At times triangular cuts on leaves are visible.

The adult beetle is stout, brownish black or black and has a long horn projecting dorsally from the head in male. Horn is short in female. This set me thinking whether the beetle is named rhino because of the horn.

As a protective measure, specific traps are placed on the trunk of the trees. While 5 traps per hectare is suggested to draw and effectively kill the beetles, my friend opts for a trap to cover 30 trees.

The trap is in the form of a plastic bin, with a cover, with openings on the circumference under the lid. One liter of water is filled inside the bin along with 2 to 3 pieces of pineapple and 5 gms of detergent. Insecticides, in the form of capsules are placed on the inside of the cover. These insecticides are classified as male (black in color) and female (red in color) and for every male insecticide, ten female insecticides are placed on the inside of the cover, in the ratio of 1:10, so that more males get killed, thus minimizing mating.

At night, the beetles are attracted to the bins, drawn by the fragrance that spreads in the air. It is amazing to note that male beetles are attracted to the bin housing the female insecticide and vice versa. Further the fragrance does not attract any other pests/ insects and does not harm humans also. These insecticides are specially made for Rhinoceros Beetles. The beetles feed on the capsule and other ingredients and fall into the water when the wings come off and they die. The dead beetles are periodically removed from the bins and burnt. The water is replenished frequently. The bins are replaced every ninety days through the year. The exercise is put on hold during the rainy season for three months.

I was of the view that not much care is required for fully grown trees. Now after my visit to the farm, I realize that regular maintenance is a must to protect the trees and ensure good yield in a sustained manner. 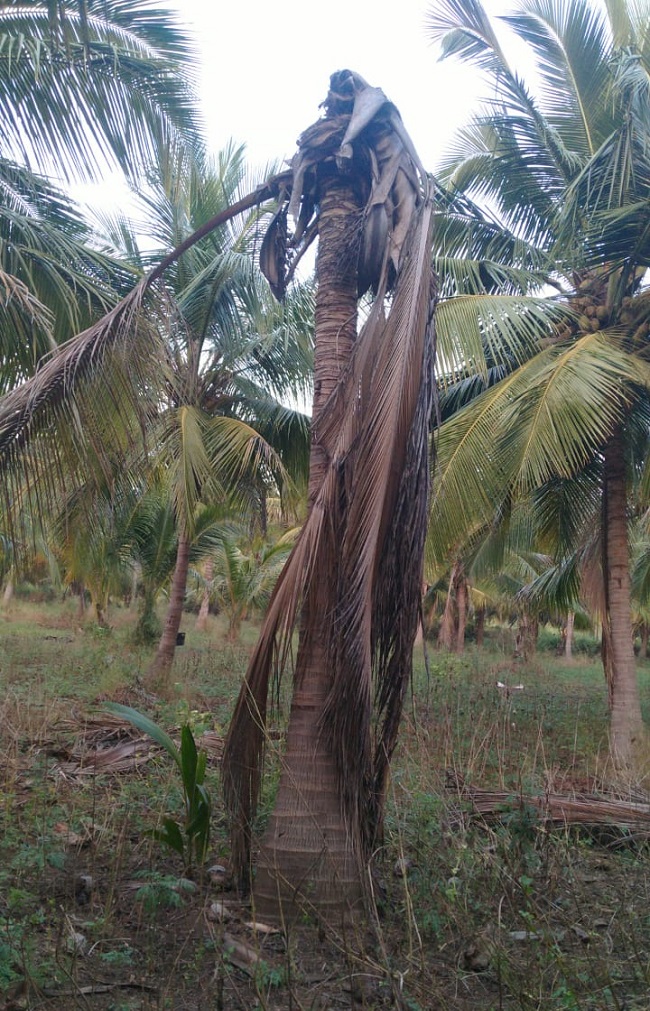