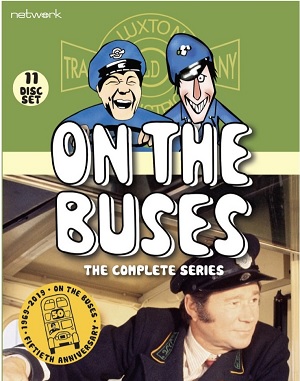 On The Buses is a British sitcom. It is one of the very best Britcoms that has ever been made. It aired from 1969 to 1973 and seventy-four episodes were made. Three movies were also made about this show. They are titled "On The Buses", "Mutiny On The Buses" and "Holiday On The Buses". Sadly, all of the cast members of that sitcom are deceased.

Reg Varney starred as Stan Butler. He died on November 16, 2008 after having a chest infection. He was ninety-two years old. Varney was in his fifties when he started starring in "On The Buses", but he wore make-up to make him look like he was in his thirties.

Bob Grant starred as Jack Harper. He died on November 8, 2003. Sadly, he killed himself. He died of carbon monoxide poisoning. He was seventy-one years old. In addition to starring in the show, he was one of the writers.

Michael Robbins starred as Arthur Rudge. He died on December 11, 1992. He died of Prostate Cancer. He was sixty-two years old. I became a big fan of Robbins when I started watching "On The Buses".

Anna Karen starred as Olive Rudge. She was the final cast member who died. She died on February 22, 2022. She died because of a house fire. She fell asleep while smoking. She was eighty-five years old.

Michael Robbins didn't return for the final season and Reg Varney quit half way through the final season. I believe their departures caused the series to end. Without Robbins and Varney, the show lost its charm and wasn't as entertaining. Without them, the show couldn't survive. If you haven't watched this show, I urge you to. It is an awesome sitcom.