Why is Kashmir ‘Burning’?

Abraham Lincoln called democracy government by the people, of the people and for the people. Kashmir’s Chief Minister the young Omar Abdullah could do well to remember nuances of the three distinct phrases used by Lincoln to define democracy. Given contretemps of electoral democracy, Abdullah can legitimately claim to be elected by the people of the state in the first past the post system. That some of the mandate was extremely narrow and fragile was evident from the low percentage of voting in some of the hard line separatist boroughs in the Valley, Down Town Srinagar, Sopore and Baramulla.

Clearly a man of sharp wit and intellect, that he is Omar wouldn’t have missed the underlying message of rejection in these constituencies. The way out was to be a government, “for the people,” his failure to do so or since the jury is still out appear to be doing so may be the principal cause of the current wave of violence in India’s troubled Northern state. 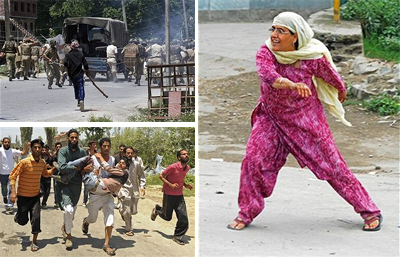 The disconnect of the Chief Minister with the people in the State was evident when Mr Abdullah went to meet victims of violence in a Srinagar Hospital in a helicopter and that too after almost two months of rioting and large number of youth fatalities. Thus there are many questions being raised as to how far he would be willing to face the ire of the public and why he has not been sensitive to their needs rushing to Delhi instead to keep him in the chair of power.

While Mr Abdullah has the support of the Central government unless he is able to reconnect with the electoral support base which had given him the mandate to rule the State howsoever fractured it may have been any change in the ground situation is not likely for the government cannot hope to rule with the help of the police without grass roots sustainment by the people.

The Central Government too in its attempts to come to grips with the situation needs to remember this ground reality of all democracies, the people are the centre of gravity. Thus political solutions being attempted as indicated by the statement by the Union home minister P Chidambaram in Parliament and the ground given by hard line separatist leader, Geelani who also issued an appeal to eschew violence will only be short respites in the anger of rejection by the people.

The Chief Minister has made desperate attempts for calm with assurances of giving Geelani political space in the Valley. The separatist leaders as well if they deem to represent the people have a joint responsibility to ensure order and the two sides have to speak to reduce the level of violence in the days ahead. For while the separatists as Geelani may not be committed to democracy, it is their supreme duty if they are true representatives of the people to prevent anarchy.

Yet the situation remains volatile and it would be difficult to ensure that the grieved who are now many and have been harmed over a period would come to accept any measures by the government for calm unless they are applied the balm of consolation. The government may therefore have to come up with a strong package of psychological compensation along with simultaneous political devolution and also combine the same with prevention of anarchy. At present this remains a tall order but hopefully the same can be implemented to bring peace in the state.

Meanwhile outside players could do well to stay out of the complexities weaved around the Kashmir cauldron. The mystery of the Email statement, purportedly from the office of UN Secretary General Ban Ki-Moon is now alleged to be the work of a Pakistani-origin spokesperson.  Farhan Haq who had e-mailed a statement to journalists at the UN headquarters in New York last week added another dimension to the problem and possibly inflamed violence in the State.

India has reportedly taken up the matter through its UN mission as the remarks were a departure from usual norms. According to a statement by India’s Ministry of External Affairs, Mr Ban’s office has clarified that no question about Kashmir was raised at any press conference. This denial also applies to another part of Mr Haq’s statement which talked about the Secretary-General backing resumption of composite dialogue between Indian and Pakistan. Such statements by international organizations at a sensitive time will instigate mobs rather than douse fires and are best avoided. As to Pakistan, Islamabad will continue to fish in troubled waters therefore the peace strategy in Kashmir will have to factor the same.

The solution in Kashmir is simple in theory but highly complex in implementation, it is the commitment of the nationalist leadership in Kashmir that has to win back the confidence of the people along with firm action to control the anarchists with minimum collateral damage. Hopefully we will see a new hope if this happens?