The Ancient Art of Thangka 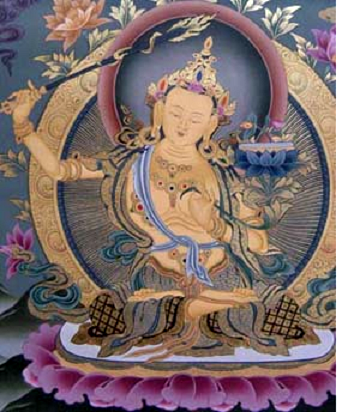 A Thangka is not just a beautiful painting but a religious testament of Buddhist scriptures and teachings. The historic origins of Thangka Paintings can be traced back to as early as 3rd century AD, where Buddhists and Hindu artisans in Nepal not only painted illuminated manuscripts but also began to depict deities and natural scenes in metal works and wall- paintings. The designs of the early Thangka paintings were simple in expression with the deity depicted in the centre surrounded by figures of lesser importance set in subtle colours. Around 621 CE, the beauty of Thangka painting spread to Tibet when Princess Bhrikuti, daughter of King Lichchavi of Nepal married Songtsän Gampo, founder of the Tibetan empire. Being a devout Buddhist, she also brought with her the images of Aryawalokirteshwar and other Nepalese deities. By the 7th century under the reign of King Angshuvarma of Nepal, Mahayana Buddhism spread into Tibet.

However, it was during the reign of Songtsän Gampo many new monasteries began to be constructed across Tibet including the sacred Jokang in Lhasa. As Buddhism spread so did the need for religious icons and Buddhist manuscripts. Artisans along with monks and traders from Nepal soon began to bring metal sculptures and Buddhist manuscripts into Tibet. The King even invited artist from Nepal to paint the murals in the Tsuglagkhang temple, Lhasa. However, by the 9th or 10th Century, Nepali artists to be able to transport the Thangkas from one monastery to another more efficiently began to create the art on cloth. It was a new school of Thangka painting that evolved to as we know it today and greatly popular as it was easy to roll up and carry around.

The colours in the 14th and 15th Century Thangka paintings begin to appear brighter and largely influenced by element from Chinese paintings. The Tibetan artisans were also inspired by the growing significance of the Tantric cult in society which was reflected in the Thangkas through the traditional poses of Shiva and Shakti, Mahakala, Manjushri and other equally popular deities. But given that Tantrism also exemplifies the notion of mysterious power and an assortment of symbols, the female element and sexuality found prominence in the paintings of that period.

Thangka paintings can be divided into two categories:  the illustrative paintings of the deities known as Palas and mystic diagrams paintings of complex text, circles and square each having specific significance known as Mandala. The illustrations in a Thangka are either painted, appliquéd or embroidered on a textile which is usually of silk as well as cotton duct. A Thangka is usually small and around 18 and 30 inches tall or wide. However, the Thangka’s used in religious ceremonies, festivals and monasteries are designed for walls and are as much as 60 feet wide and more than 20 feet long. The scroll paintings describe scenes from history and retell the legends of the deities within the Buddhist scriptures. But as the ancient art passes from one generation to another, the beauty and religious relevance of the Thangka continues to be preserved through time.