Freiburg: The gateway to the Black Forest 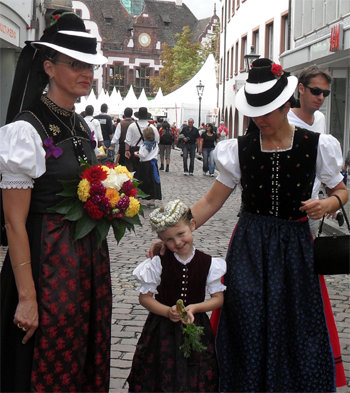 For a week Freiburg became the capital city of the trekkers from all over Germany. There they were bearing their association or verein flags, banners, wearing their traditional costumes or trekking outfits singing traditional trekking songs called ‘Wanderlieder,’ because trekking is a way of life in the Alpine countries, and Freiburg and the Black Forest are no exception. They were all obliged to go through Freiburg’s Schwabentor, the gateway of the Swabians. I found the entire spectacle with olde, traditional costumes rather delightful and the trekkers who came to town rather friendly.

The participants were greeted by the minister for ecology Tanja Gönner at the elegant Concert House and the procession began at 2 pm along the Schwabentor. Last year 1,7 million trekkers took part in the treks organised by the vereine (associations). In Freiburg alone, you could take part in 100 treks with 300 trained-guides. 56 per cent of Germans say that walking in the countryside is one of their favourite pastimes. Even the health insurance companies recognise the Wanderverein’s decorations as a show of health performance and a desire to lead healthy lives. After all, men are ruled by toys, said Napoleon, and distributed medals to his troops for their performance and participation in many battles. In this case, it’s a peaceful jolly trekking, and the people are not out to conquer countries but hearts. The magic word is: Völkerverständigung. Aiming at the understanding between different ethnic folks. Even among the Germans you talk of Völkerverständigung because Germany is a cocktail of folks and dialects, despite Hitler’s attempt to make an Aryan race out of Germany. He himself was an Austrian. A Berliner, Saarbrücker, Bavarian, hamburger, Swabian, Badener and other Germans have all their own way os saying things, expressions, tongues and psyche too. No two Germans think alike, and it also depends on the strata of the society one is from. I like the ad about the hard-working Swabians: ‘Mir könnet alles, ausser Hochdeutsch,’ which means: we can do everything aside from speaking Standard German.’ It’s the upbringing in a local, dialect that causes linguistic faux pas in the company of others from other regions.

You are greeted by the different verein groups with a hearty ‘Frisch auf!’ The area around Feldberg, which has the highest mountain, has subalpine vegetation. It is the desire of the verein to preserve our wonderful heimat, to develop it for future generations after the principle ‘Protection through Use’ by giving the people who work and live in the vicinity of the forests (alpine farmers, forest rangers, forest-workers) a means of subsistence. This is where the Schwarzwald association plays a vital role.

One of the delights of living in the three country triangle is that you can undertake walks in the Black Forest countryside, go across the river Rhine to the Vosges mountains in Alsace (France) and Hegau in the Lake Constance area. The Black Forest Association celebrated its 110th German Wanderer’s Day, a day in which you could go for walks in the countryside, and the towns and hamlets participating undertake part in the celebration offered cultural programmes. The motto was: Nature, Culture and Wanderung (trekking) belong together. Since Nature is intact in the Black Forest, culture has been raised to a higher level, it can be relished with all the senses.

The Schwarzwaldverein has 75,000 members divided into 239 groups with 23,000 kilometres of trekking routes that have been marked and are nursed. You can do long treks, regional treks and local travels with yellow rhombus signs to show you where to go en route, which give you a sense of security, reliability in order to reach your respective destination. The yellow rhombus on the trees shows you where you are, in which direction the next destination is, and how many kilometres. It also tells you where you can rest and refresh yourself.

The association also issues new updated trekking maps. Moreover, the Schwarzwaldverein is accredited as an official Nature conservation association according to paragraph 29 of the Bundesnaturschutz law, and also protects wild areas, wild animals and plants. The Heimat and Trekking Academy Baden Württemberg co-operates with the Black Forest and Swabian Albverein, and educated and trains trekking-guides. There are over 700 certified guides. The Schwarzwaldverein also promotes variety in the trekking and cultural programmes. It also runs 25 trekking homes, where you can eat, drink and sleep, and is also responsible for the 67 wildlife observation towers. Additionally, it promotes Germany’s youth, and nordic walking  and biking routes in the mountain trails.

In order to promote tourism, a special card has been introduced for the Black Forest with which you can use the bus, streetcar and the train, which is unique in Europe. Other European nations should also follow this innovative example, to make getting around easy in the Alpine countries.

‘What’s the Black Forest?’ you might ask. It is our dark, green homeland and is the biggest chain of the middle mountains in Germany. If you want to traverse the entire mountain ranges, you can do it from the ‘Gold-City’ Pforzheim in the north over 280 km to the historical town of Basle (Switzerland) along the High-Rhine to the south.

The mountains to the east and west of the geological faults that we call the Vosges and the Black Forest, have arisen almost 1500 metres. The stretch of land which is the Upper Rhine Rift through which the Rhine flows today crumbled, thereby creating the present geological formation. A great part of the Northern Black Forest is composed of mixed sandstone and is not good for agricultural purposes. The Middle and Southern Schwarzwald mountains have hummocky topography which makes it easier to cultivate and ideal for settlements.

Whereas the Romans didn’t find this area interesting due to geo-political reasons, settlements began to grow in the 8th and 10th century in the Black Forest mountains, valleys and spurs, The first houses were the cloisters. In the Middle Ages the Schwarzwald was known for its silver and lead mines. The burning ovens in the Neuenburger area show that even in the Celtic times iron was an important ore. The spas (thermal baths) of Baden Baden, Badenweiler, Bad Krözing, Bad Bellingen use the healing wetness which comes from the mountains. A combination of a mild climate, fresh mountain air make a lot of places in the Black Forest mountains ideal for reconvalescence of people with pulmonary illnesses (Kurorte). The Schwarzwald, Black Forest or Foret Noir, as the name suggests, is made of pine and beech forests. During the early industrialisation, a big part of the forests were used for producing charcoal, glass-manufacture, mining for ores, and wood for home-fires needed in the bigger towns of Freiburg and Basle. When the forests were denuded, spruce saplings were planted which changed the face of the Black Forest to its present form.

Why do people seek the Waldeinsamkeit, the stillness of the forest? The answer lies perhaps in a poem penned by L. Tieck. It crops up at the beginning at the end of a stanza. Tieck uses this in varying form thrice in his story ‘The blond Eckbert.’ The opening lines of poem no. 5 in Eichendorff’s cycle ‘Der Umkehrende’ runs thus: