An assortment of buildings stands on top a hill in Mangalore, Karnataka, with a rich history of more than one hundred years. It is called St. Aloysius’ College, run by the Jesuits (Society of Jesus), a Roman Catholic Order with allegiance to Pope in Vatican. This is the history and story of this elite school on the hill, named after its patron saint, Aloysius Gonzaga. It is well reputed for its fine teaching but the pinnacle of its fame is its glorious chapel with its murals of intricate artwork.

Aloysius Gonzaga was born on March 9, 1568 in Lombardy, at the family castle. He was the first son of Marquis Ferrante of Castiglione, who was in the service of Philip II of Spain. When his father introduced him to military service, as was the family tradition, Aloysius decided on a religious path instead. He was sent to Florence for his early education in 1577. The Duke of Mantua appointed his father governor of Montserrat in 1579 and Aloysius joined the court in the service of the Duke. Here he suffered kidney ailment that left him with kidney and digestive illness for the rest of his short life. He started teaching catechism to the poor youth of Castiglione and began to practice great austerities. He began to request his father’s permission to join the “Society of Jesus” order but was initially rebuffed. In 1584 his father caved in to his repeated plea and allowed him to join the Jesuits of Rome in 1585. He was then sent to Milan to finish his studies from where he was recalled to Rome because of ill health. He took his vows as a Jesuit priest in 1587 and served in a hospital operated by the Jesuits in Rome. During the plague epidemic of 1591 he diligently worked with the victims of plague and eventually contracted the disease himself and died on June 21 of the same year. He was twenty-three years old. Aloysius Gonzaga was canonized in 1726 and was declared protector of young students by Pope Benedict XIII. Pope Pius XI declared him patron of Catholic youth.

Late in the 19th century the Catholic community in Mangalore in the coastal Karnataka invited the Jesuits from Italy to build a school in Mangalore and named it after saint Aloysius Gonzaga. This is the story of that school.

History of the School

St. Aloysius’ school first opened its doors in the year 1880. It started with one hundred and fifty students as an upper secondary school (high school), with two teachers, namely Fr. Jos Willy and Fr. Scholastic Postlewhite, who also served as administrators. Three years later a Second Grade College was started and five years later the middle School became a reality. The Primary School was added much later, twenty-eight years after the starting of school on January 12, 1880. More than a hundred years later, St. Aloysius’ College offers, First Grade College, Evening College and High School as well as College of Business Administration. These in addition to its Primary, Middle and High Schools form its seven proud institutions. There are close to 5000 students and nearly 150 teachers.

It all began in the year 1858, when the Catholic community of Mangalore petitioned Pope Leo XIII to commission the Mangalore Mission to the Society of Jesus, similar to the successful missions in Bombay, Calcutta and Trichy. Catholics had migrated to Mangalore during the 17th century from Goa, mainly as farmers. During Tippu Sultan’s reign the community suffered enormously. Tippu distrusted them and suspected their loyalty and accused them of sedition, siding with the British. About 60,000 of them were interned in Srirangapatnam in 1784 and only after Tippu’s defeat and death in 1799, some of the survivors returned to Mangalore. Due to their entrepreneurship and veracity they soon became successful again in Mangalore. The community realized that it was time to instill western style education in Mangalore. That was how they came to petition the Pope. The Pope sanctioned it in 1878 and a delegation of nine Jesuits set sail to Mangalore from Venice. They reached Mangalore on December 31, 1878 to a warm welcome. They soon went to work and the indefatigable Fr. Willy took the helm as the first rector in 1879. A private bungalow belonging to a Mrs. Mary Magdalene Coelho was used as the first class room. The elder Fr. Willy and the younger Fr. Postlewhite works diligently for the noble cause of establishing an educational institution in Mangalore. The students affectionately called the duo, Abraham and Isaac.

Fr. Mutti was one of the first nine Jesuits, who played a pivotal role in the construction of the college buildings. Mr. Lawrence Lobo Prabhu had donated nine acre of land, on the top of Edyah Hill. Fr. Nicholas Pagani worked diligently in arranging for the transfer of the land and starting construction. The original budget earmarked for construction was Rs. 1,50,000, though much more was spent before the building was completed. It was completed (the present High School building) and commissioned for use in 1885. Unfortunately, Fr. Mutti never witnessed his dream realize, as he had to return to Italy due to illness in 1884, where he died the same year from complications of tuberculosis. Fr. Willy, a Swiss by birth, with a proven record from St. Mary’s and St. Xavier’s in Bombay had been transferred to Mangalore as the first rector. The school building opened its doors in 1885 with the classrooms on the ground floor and the “Father’s Quarters” on the second floor. The red building on the north side of the high school building was completed in 1900. The College section with two stories of classrooms was built in 1908. The same year the boarding and hostel buildings to the west were started. In 1928 the library and science building were added in front of the high school building. A building called the white building was built in 1939, where the III and IV form classes used to be held. In 1940 an extension to the college building was added for English and language classes. The college auditorium building was opened in 1964. Finally in 1976, a new building for primary and secondary education was opened. In its centenary year, 1979-1980, Centenary building for library, reading room and vocational courses was opened. In addition a separate post graduation course facility for business management and secretarial courses was opened in Ullal. The same year extensions to college and high school playground were also undertaken. The land around the high school was acquired in stages over many decades from different owners. Most were sold to the school by the Catholic landowners at benevolent prices. The land behind the high school, where the white building was built, was acquired from Mrs. Mary Magdalene Coelho. 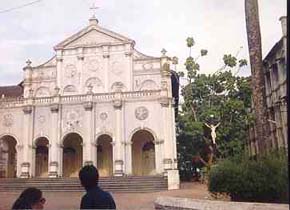 The crown jewel of St. Aloysius’ College is the Chapel. It was completed with the construction of the school building under the tutelage of Fr. Mutti and Fr. Willy. The rector from 1900 to 1904, Fr. J. Moore helped transform it to a splendid collection of painted scenes from the bible. A Jesuit Brother, Antonio Moscheni was brought from Italy to paint the walls and the ceiling of the chapel, thus telling the story of the Bible in pictures. Brother Moscheni came to Mangalore in 1899, when he was forty-five years old. It took him two and a half years to paint an amazing array of frescos on the sidewalls as well as oil-on-canvas on the ceiling. This activity took place at a difficult time in the history of the school. The attendance was poor and Mangalore was in the middle of an epidemic of Bubonic Plague in1902. This was a bizarre coincidence, as Aloysius himself had died from contracting Plague when he was caring for victims of Plague in Rome, at the age of twenty-three. Monsoon rains damaged a part of the college building and the college classed had been held in the newly constructed red building. The funds were low but the inexorable Fr. J. Moore, who was a Californian of Irish descent, never gave up hope. The crisis was overcome and the challenge was met with Fr. Moore’s guidance. 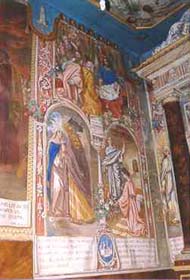 There are two types of paintings in the Chapel: fresco and canvas. A fresco is painted on fresh wet lime plaster walls. The colors get embedded in the lime plaster as they dry. Frescos cover about 600 square meters of the walls of the Chapel. For an oil painting, mixing pigment with linseed oil makes the colors. The canvas is made of pure linen of strong close weave. The paintings on the ceilings in the Chapel (about 400 Square Meters) are in oil on canvas. Because of the Chapel and the Jesuit school and churches, Mangalore earned the fitting name of ‘Rome of the East.’ 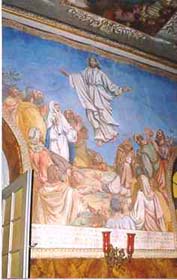 More than hundred years later the paintings in the chapel showed signs of decay from the weather and moisture of Mangalore monsoons. Cracks appeared on the canvas and restoration of the masterpieces was done between 1991 and 1994, ninety years after Brother Moscheni painted them.

Any attempt at the study of the history of the school in incomplete without discussing the Jesuits. They are the 'spiritual sons' of St. Ignatius of Loyola, a Spaniard, who organized the 'Company of Jesus' or the 'Society of Jesus', or the 'Jesuits' in 1534 at the University of Paris.

Originally the 'Society of Jesus' had six members. But many joined their ranks. At present there are more than 28,000 Jesuits spread all over the world, serving humanity in practically all spheres of life. They are probably the most influential group of men within the Catholic Church. It takes about fifteen years of spiritual and intellectual study to become a Jesuit, including three years of philosophy and four years of theology. Apart form their humanitarian activities of caring for the poor and the sick, the Jesuits have a reputation as master educators. It was this reputation that brought them to Mangalore, to start the college on the hill, St Aloysius’ College.