A Village on the Ruins!

Human habitats appear permanent, but they are not. Just turn the pages of history and you will find many ancient towns buried under the existing townships. This has been happening since the days our ancestors started building dwellings. Older habitats are often ruined by natural disasters and over them new habitats come up. The scenario is much the same for the villages. The only difference is that often such villages remain unheard of.

What bogs the mind is that if a prosperous town/village could be wiped off by a natural disaster in the ancient days, what stops it from ruining the prosperous, densely populated habitats of today?

Khajnawar is a non-descript village in Saharanpur district of Uttar Pradesh in India. The specialty of this village is that it located over not one but two ancient settlements. This is something strange! One can actually see the earliest ruins atop which the next habitat was established and after it was also wiped off the third one, which is the present village came up. How this could have happened? It makes an interesting story almost like a crime thriller. Alas the criminal in the thriller is not man but the nature! 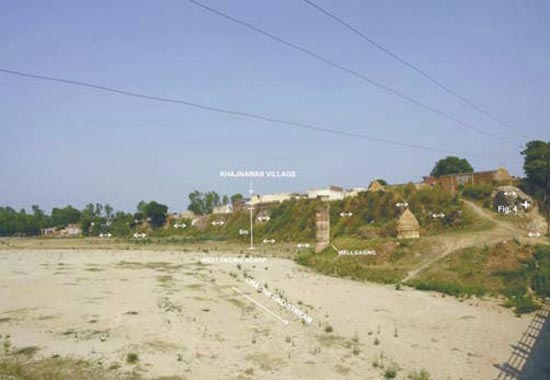 Khajnawar is located close to the piedmont zone of the foot hills. The rivers from the mountains (Himalayas) as they descend on the plains, suddenly loose their gradient and velocity. The sediments carried by the river are offloaded in a fan like form. Since several rivers and rivulets drain out of the mountain front, these fans coalesce to form a large area sloping southwards, made of sediments of assorted sizes. This is the piedmont zone. If we consider the Himalayas as a vehicle then the piedmont zone is like the front ‘fender’, which takes the maximum onslaught of all the impacts. 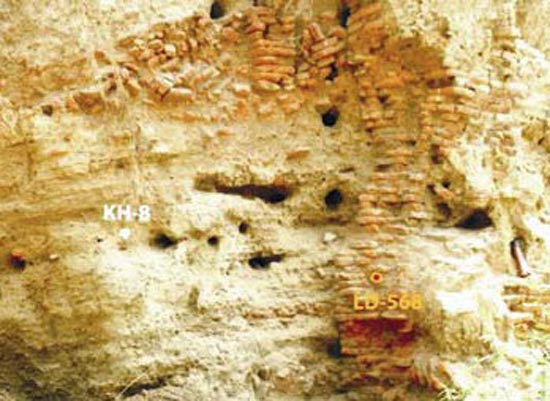 The seismologists have been actively hunting for any clues of the past earthquakes from the alluvium country south of the Himalayas. At times structures on the plains have been affected by the earthquakes, like 1803 earthquake of Garhwal-1803 damaged structures in Delhi, and the Chamoli earthquake of 1999 produced cracks in buildings in Delhi. With the development of paleo-seismology evidences of great earthquakes in the pre-history are coming forward. Evidences are there to indicate the presence of surface rupture earthquakes dating around 1450 CE in northwest Himalayas and 1100 CE in Central Nepal. Surface ruptures occur when a powerful deep seated earthquake breaks through the surface. Senthil Kumar of Center for Neotectonic Studies, University of Nevada, USA claims to have identified surface rupture structures in the Holocene (10000 years old) sediments near Chandigarh, Kala Amb, Rampur Ganda, Lal Dhang and Rampur over a distance of 250 km. These structures are a result of displacement of the Himalayan Frontal Thrust ~ 200 CE and before ~1700 CE… On the basis of their study the scientists do not rule out the possibility of an earthquake of much higher magnitude than what caused these ruptures in the past.

Khajnawar is located at the terminus of the piedmont zone. An active fault has been located in the Piedmont Zone between the Ganga and the Yamuna rivers-termed as the Piedmont Fault (PF). An active fault indicates that the fault movement is still active. Such faults are indicative of earthquakes in the past 10000 years. Such regions get periodically activated when the stresses in the subsurface get unbearable and released through the weak zones or the faults. The presence of active faults in an area thus makes it all the more vulnerable for earthquakes of high magnitude. Collapsed dwelling structures, ash layers with burnt charcoal, pottery fragments and bones have a gory tale to share about Khajnawar.

The first habitation at Khajnawar came up in 2600 years ago and flourished till 1400 years ago. The contemporary people were quite industrious it seems! They used large bricks says V.C. Thakur and his co-researchers in one of their recent papers. People at Khajnawar smelted iron in those days to make nails, hooks and knife etc-indicating a hunting and fishing traits. They also smelted copper. The floor where bricks were made was perhaps a sort of a hearth as evidenced by burnt mud, potsherds, bones and charcoal. Those ancient people were experts in the use of ceramics-as seen by the pieces of red ware, black ware and painted grey ware.

The next habitation started after a gap of 550 years that is 850 years ago. In these years the place may have remained a desolate ruin, but the people who settled in again were more industrious than their predecessors. They made vases, jars, knives, edged bowls, dishes, basins, lamps. Not only ceramics they also made glass pendent, glass bangle and lac bangles.

Profusion of remains of artifacts clearly indicate that life was prospering well second time on the same spot. But then something happened! What must have happened to obliterate the life on a happy settlement? Naturally nothing short of a major earthquake could have done it! The deposits of material transported by the rivers on the mountain front have evidences to show that in the past 10000 years the region has experienced several turmoils that shook the earth. Trenches dug in the area show fault displacement up to 25 meters. Such large displacement of material can take place only via powerful earthquakes. The Himalayan Frontal Thrust (HFT) has been affected in the past by past earthquakes of magnitude more than 8. Dehradun, just 60 km northeast of Khajnawar was affected largely by the Kangra earthquake of 1905. A segment of HFT barely ~ 15 m north of Khajnawar was reactivated by the past earthquakes.

Trenches dug to locate active faults (evidences of past earthquakes) in the Himalayan Frontal region at Chandigarh, Kala Amb, Rampur Ganda, Lal Dhang and Ram Nagar reveal a 240 km long fault between Chandigarh and Ram Nagar, which was the out come of a single event (read earthquake). Based on the Radiocarbon dates it has been postulated that the said large earthquake occurred in 1450CE. In 1803 another major earthquake of magnitude more than 7 affected a large part of Garhwal. The tilted brick wall, irregular dispersion of bricks rubble within sand and remnant of brick wall in top central part are 350 years old and suggest of a large earthquake. Optical Luminescence dating of material from this part points finger at the 1803 earthquake which shook the entire Garhwal.

The gap of 550 years between the settlement I and II could also be due to climate as well, say Thakur and his co-workers. The piedmont surfaces are made of highly porous, unconsolidated material, prone to water erosion. Streams change courses frequently such regions. As a result even now the practice of keeping the revenue records of agricultural land does not exist. What is a lush green field this year may be a wide stream after rains! Thus abandonment of settlement I may have been possible due to a sudden climate change. People practiced agriculture in this fragile ecosystem. A severe drought too could have ruined their farms and compelled them to migrate. It is just coincidental that the 550 year long gap between the settlement I and II corresponds to failure of monsoons followed by wet conditions.

The ‘mounds’ of ancient civilizations are in plenty along the river courses in the Ganga Plains. With the modern tools of dating it is now possible to build a precise chronology and fill in the blanks of history/archeology. The past events are often good indicators of future hazards too. The piedmont area has evidences of large earthquakes and prolonged droughts in the past 2000 years. There is a dire need to date and develop a precise chronology so that the contemporary society is prepared and saved from a premature death. Chronology gathers significance today, as the past evidences have shown that disastrous earthquakes are repeated at 1000 years interval.

Are we prepared to meet the challenge of natural disasters?

Image-1. Present day Khajnawar village atop the ruins of earlier settlements, on the banks of Chacha Rao.
Image 2. Twisted and disturbed red bricks have their own tale to share.
(Both images curtsey Editor Current Science, India)