Save Forests, Save Turbines

In the last issue we read about the vanishing forests of tropical Asia and the consequences thereof. One of the indirect consequences of depleting forest cover on the Himalayan slopes is enhanced rate of erosion and mass wasting. Each year mass wasting processes lead to landslides during the monsoons when the hill slopes are wet and lose rock mass is 'well lubricated' to slide. Simultaneously the eroded surface material reaches the rivulets and rivers in bulk. A large proportion of which, is the silt which travels with the river hurtling down the slope. 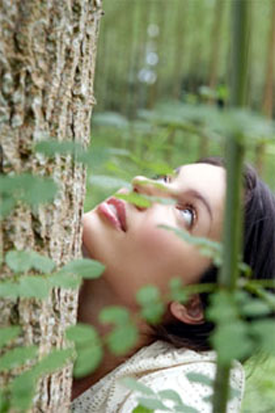 Forests are like our life support system. They are the sinks of carbon dioxide and a great provider to life forms. The Indirect advantage of the forests is that the roots of trees hold the slope forming material. They prevent it from erosion and check its movement to the river.

The fast pace of development of our nation relies mainly on electricity. Total surface water potential of our country is estimated to be 1675 million cubic meters. It means that there is no dearth of water for hydroelectric power generation. Water resource available is sufficient for irrigation too. It is estimated that if utilized in a planned way the available surface water alone can irrigate nearly 75 million hectares of land.

Taking the above fact into picture several hydro-electric power projects came up in the mountainous terrain of our country. Before a such a power project is executed a detailed survey of the amount of silt carried by the rivers is meticulously carried out by the geologists. Silt is mainly composed of silica, which is quite a hard substance. We know that silica grains are used in making sand paper because of great abrasive power of the mineral. Therefore, lot of care is taken to evaluate the quantity of silt that would reach the reservoir of the dam. It is natural that if the water reaching the reservoir travels through areas with loose slope forming material bereft of trees more silt would be produced. The eroded material upon reaching the reservoir not only upsets the calculations about the volume of water that would be available in the reservoir at any given time, it manages to reach the turbines that generate the power.

In a study carried out by the Geological Survey Of India (GSI) a few years ago, it was estimated that in Ramganga and Bhakra reservoirs in the Himalayas the annual siltation rates are 0.31% and 0.40% respectively. Maithon and Panchet reservoirs in the Shield areas of the peninsula show siltation at the rate of 0.80% and 0.845% respectively. Koyna reservoir in the trap country has a siltation rate of 0.48% per annum. Yes the rates of siltation vary, because of the varying geological and geomorphological setup of the terrains on which the dams/reservoirs are located.

How much damage the silt can do to the turbines is an interesting study. Baira-Siul Power Station, a project envisaged in 1970-71 was constructed on fast flowing tributaries of Ravi River, namely Baira, Siul and Bhaledh. It is a run of the river scheme. The project started commercial production of electricity in 1982.

National Hydro-electric Power Corporation (NHPC) carried out a study in the Baira-Siul Power Station, Himachal Pradesh. It was found that river waters carried 75-98% grains of quartz (sand). Quartz is third highest in the grade of hardness of various minerals. Only Corundum and Diamond have hardness more than quartz. These grains work as an abrasive when they strike the moving turbines. Damage to the Plant was so severe that the stainless steel guide vanes loose about 15% of metal from surface after 1000 hours of operation in one year and after a few years the vanes disappear.

A hydropower station is erected with an anticipated life of 100 years. Therefore, the problem of corrosion of vanes of the turbine needs attention. Various measures from designing de-silting chambers in such a way that no or minimum silt reaches the power house to afforestation and painting the vanes with non-corrosive paints have been suggested and are being worked out.

Harsh Gupta, an expert engineering geologist with GSI studied the problem in some of the power projects in northwest Indian Himalayas and has come out with some solutions too. In one of his recently published papers in the Journal of the Indian Society of Engineering Geologists he has elaborated his views.

A major hydropower project with six turbines producing 250 MW electricity each has four de-silting chambers each about half a km long, 16m wide and 27m deep, for exclusion of silt particles of 0.2mm and above. All the six generating units faced problem of erosion of the underwater parts during their maiden encounter with the monsoon. During the second monsoon year, the stream flow rate and silt was catastrophic on the generating units when the discharge in the river rose to 1500 cumecs from general flow of 400 cumec. During the floods the river carried a maximum silt content of 1,51, 000 parts per million (ppm).

Another power plant designed for maximum silt content of 1200 ppm gets around 12, 000 ppm silt with a quartz content varying between 40 to 78%. It is imperative that the guide vanes, labyrinths and discharge ring all are heavily scoured he says.

Another power project in H.P. had no de-silting chamber because during the pre-construction surveys silt level was low and such a structure was not warranted. Alas the rate of silting turned out to be rather high, once the reservoir came up. Within six years the reservoir got silted up with a maximum silt concentration of 3792 ppm. Condition became so bad that silt had to be flushed out by opening the sluice gates during the monsoon. Turbine vanes, turbine runner etc started showing the signs of corrosion and began to wear out. Situation is such that repairs of the turbine have to be carried out every year after the monsoon and a major maintenance is done every three years. Naturally this enhances the cost of power generation.

Yet another run of the river scheme showed 12000 ppm of silt with 75 to 95% quartz grains. Soon the turbines started to show abrasion.

Storage schemes on the other hand, showed practically no silt in the powerhouse. This is mainly because silt in the impounded water in the reservoir settles down and only clear water reaches the turbines.

Harsh Gupta's studies revealed that a particular type of turbine (Francis turbine) was more prone to damage from the silt compared to others like Peltan and Kaplan turbines. He also found that turbines with larger diameter faced less silt abrasion than those with faster runner speed and a higher head. The striking velocity of silk laden water being higher in such cases, damage was more.

The NHPC and Bharat Heavy Electricals Ltd (BHEL) have tried several ways to check the damage on the Hydro-turbine components due to silt abrasion. Losses are tremendous. The NHPC alone spends about Rs One Crore annually in replacing/repairing worn out parts, besides the downtime of Power plants.

Government of India's TIFAC along with Carborundum Universal LTD, (CUMI), Chennai and NHPC has tried coating of various materials on the components endangered by abrasion. A plasma spraying technique is usually done. This generates very high temperatures to melt ceramics so that they can be impacted at high velocity to form a coating on metal surface, without affecting the base material. Alumina-Titania Ceramic powder in varying compositions is tried. Such studies take time, because the impact of abrasion is a slow process.

The engineers are optimistic about the results and say that if proven successful the technology will have a good export market too. The Hydro-Power Plants in the Hindu Kush region and greater Himalayas have similar problem of siltation.

Engineering solutions may temporarily offset the damage but the real solution lies in control of erosion. Himalayan states have to be more stringent about deforestation and mass wasting of the hill slopes. Constant erosion of mountain slopes is bound to reduce the lives of the hydroelectric projects. One must remember that such projects involve a colossal amount of money and unless saved from erosion the maintenance cost of turbines will become a recurring feature, adding to the cost of power generated.

Save Forests to save turbines for a better tomorrow.