The Kaveri Purana is a part of Skanda Purana, one of the last Puranas written.  Some researchers see Kaveri Purana as a way of trying to integrate Kodavas to Hindu society by explaining that they are the progeny of Kshatriya kings and Sudra women.  Kodava culture did not recognize the Aryan varnashrama and hence did not have caste systems.  This helped to diffuse any friction between Kodavas who were radically different than their Hindu neighbors.

The following poem gives us a sense of devotion of Kodavas to Mother Kaveri:

O sacred form of Parvati
O Lopamudra,
You descended to earth as a Brahmin’s daughter,
And to cleanse the sins
Of all the sinners
You flowed from the kundike*** to the Eastern sea.

To all the proud ones
You are merely flowing water.
But to the suffering, you are sorrow-relieving holy water.
Those without children
Those without family
And those weary with suffering, bless and care for them, O Mother!

The family unit of the Kodavas is called the okka.  It is a joint patrilineal clan with males of common ancestry.  The male members of an okka share an okka name.  Currently there are about 1000 okka names and families in Kodagu.  Traditionally all the members of an okka lived in a large ancestral home called ain-mane (ayyangada mane – House of the Elders).  Usually the ain- mane has a courtyard in the front surrounded by thick mud walls and bamboo thatched roof.  Out houses for additional living space were also common.  Ain-mane is surrounded by large property (jamma) and by huts of laborers attached to the okka, who provide necessary services.  This cluster of homes and property form the nucleus of a village called ur.  A group of ur or villages is called the nad. A number of nads make a sime. Traditionally there were eight simes in Kodagu.  The land belonging to the okka is cultivated jointly by the family members and cannot be partitioned or sold.

The oldest member of the family is the head of the okka and is called pattedara or koravukara.  It is a hierarchy that is passed on to the eldest member of the clan by right.  Similarly each ur(or ooru), nad and sime has a headman called as takka.  The takkas settled disputes and imparted justice after consultation with other elders.

Girls and boys from one okka cannot marry within the same okka.  However, cousin marriage between children of brother and sister is accepted (but not between children of two brothers or two sisters).  Once married, a girl assumes the okka name of her husband.  Mother is held in high esteem in Kodava society.  Mother is the first one to bless a young married couple or a journeyman.  Unlike Hindu society, a widow is still allowed to participate in happy occasions like marriages of her children.  She is the principal figure to conduct the marriage ceremony that traditionally is conducted without a Brahmin priest.  A widow is allowed to remarry and this is a common practice as it is fully accepted.

Kodavas are primarily ancestor worshippers.  At their homes they keep an idol of their ancestors to whom they offer prayers and obeisance.  It is usually made of clay or wood or covered with sheet metal, and housed in a shrine (kaimada) built near the entrance to the ain-mane.  The founder of each okka, the Karanava, is worshipped by the members of each okka.  Sometimes it is simply kept on a platform under a sap-exuding tree near the entrance of ain-mane. Some okkas conduct a karana kola, a dance of the ancestral spirit during which a Malayalee migrant dresses in elaborate colorful clothing and dances in a trance and acts as an oracle.   During this ceremony he is symbolically possessed by the karanava, the original founder of the particular okka.  In every home a lamp called Nellakki Bolucha is lit in honor of the Guru Karana.  The lamp in the central hall is lit by the embers of the kitchen hearth every day.  Kodavas were also nature worshippers revering sun, moon, earth and fire.  Fire of the kitchen hearth is especially sacred.

Kodavas did not have allegiance to Hindu gods, though more recently Hinduism has influenced them enough that they visit Hindu temples.  The influence is more gradual as more and more people came in contact with Hindus of Kerala and Dakshina Kannada.  Thus Bhagavathi and Chaundi (Chamundi) became recognized goddesses.  Mother Kaveri is their Goddess figure and the festival of Kaveri’s birth, Tula Sankramana attracts Hindus from neighboring districts and states to bathe in the sacred river.  This custom surely is a later addition to Kodava custom as the concept is purely Aryan in its proceedings.    Another goddess, Pannangalatamme is the patron goddess of the original inhabitants of Kodagu.  She has a number of brothers as gods; chief among them is the Shaivite Igguthappa who controls the monsoon rains and coffee bean showers.  His brothers are Pemmaiah, Thambipan, Paloorappa and Thirunalli.  Some of these brothers are Vaishnavite gods, a clear indication of Aryan Hindu influence on this mountain community. Today all the gods of Hindu pantheon are recognized by Kodavas and they are fully integrated into Hindu society.  Due to their martial traditions Kodavas consider themselves as Kshatriyas. 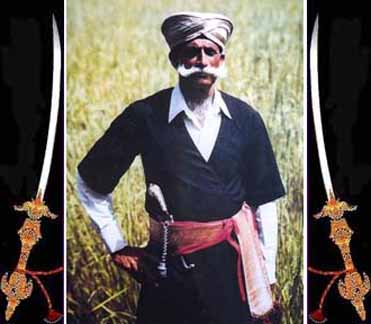 The old traditions of Kodavas, before embracing Hinduism are unique and vastly different than Hinduism.  None of the festivals, marriages, births or deaths is conducted by a Brahmin priest.  Libations and meat are served in these occasions.  Some of the customs are reminiscent of old Eurasian and pre-Christian Greek traditions.
The traditional costumes of Kodavas resemble that of the people of Middle East, with a long coat (Kuppya) down to mid-calf with a band of gold trimmed sash (chele) with tassels, across the waist tied in a bow.  The ends of this sash hang gracefully over the left thigh.

The coat has a V-neck showing undergarments at the neck and arms.  The kuppya is a sort of double-breasted coat with the right wrapping over the left side and stitched on the left side of the chest and trunk.  It comes in various colors.  The headdress is a piece of cloth (vastra) tied around the head, a turban, with the loose end hanging in the back at the nape of the neck.  A bridegroom wears white kuppya with a brocaded white turban and a red brocaded chele. 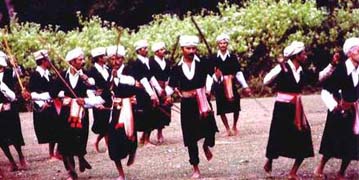 Sports and martial arts like sword wielding are extolled, and hence there are some traditional swords and machetes that are used during ceremonies as well as part of the ceremonial costume.

The most important is the peeche kathi, which is an ornamented dagger that can be worn on the waist band. 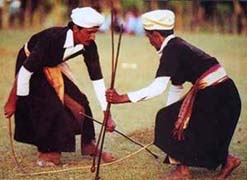 During wedding ceremonies, peeche kathi is used to break coconut and scoop out the inside shavings and offered to others.  An odikathi which is a sword with a broad head is used to cut trunks of banana trees in a ceremonious fashion during weddings.  These rituals are performed by a member of the groom’s party during the initial offerings by the bride’s party.

Kodava women dress in a manner that is unique to their community.  The pleats of the sari are tucked into a band around the waist.  The pallu is brought around the back and then on to the right shoulder and tied in the front with a knot (molakattu).  Chemise and ankle length petticoats are worn under the sari.  A long-sleeved jacket with or without a close collar is worn as a blouse. Married women cover their heads with a cloth, five feet on each side with edges over the ears and then tied in the back with ribbons.  This head garment is called a chowka. A widow will wear only white.  Marriages of widows are not only accepted but also encouraged.

Kodavas are very fond of dancing.  Folk songs are sung while dancing.  Kombat is a dance when the dancers are holding horns of stags, Couriat, with dancers holding yak-tails, piliyat, with peacock feathers, bolakat, with dance done in the temples around a lamp, and kolat, with dancers holding sticks are all commonly performed dances.  Ummalat is a dance by women holding cymbals.  Even in most of the religious functions, liquor and meat are not taboo.  This has given the Kodavas a reputation as fun loving people with little inhibitions, who extol physical strength and skills.

Kodavas are an ancient society, origins of which are unknown, who made their homes in the slopes of Western Ghats in the southern part of the state of Karnataka.  They are fiercely independent people with a proud martial tradition.  Though they form only about 20% of Kodagu, they are the dominant group, synonymous with the region.  The customs followed by the Kodavas are strange and different when compared to Hindu customs.  Over recent centuries, Hindu culture has influenced the Kodavas immensely but yet they still have maintained their uniqueness.  Caste system was unknown to them and they treated the low caste Hindus as equals and did not subscribe to the Brahmanical dominance of Hinduism.  Their worship, weddings and death ceremonies do not call for a Brahmin priest to preside over them.  They are culturally liberal and their women are allowed to marry again if widowed or divorced.  The Kodavas also dress differently and the men wear tunics similar to some of the Middle Eastern or Eurasian tribes.  The women of Kodagu are known for their beauty and men are ruggedly handsome.  They have their own language, without a script, which is thought to be one of the Dravidian languages of South India.  Due to its geographical location, the Kodava language is influenced by Kannada, Malayalam and Tulu languages. 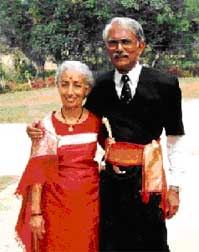 It is also remarkable that Kodavas contributed little to fine arts, music, painting or sculpture.  Because of their isolation, and the wild life around them, they became adept at hunting and self-defense.  Disease and death due to poor access to health care and deadly malaria had decimated their population for many centuries.  Only in the last century or so the population of Kodavas reached 100,000.  Their population had been further trimmed by Hyder Ali and Tippu Sultan, yet the Kodavas refused to be ruled by the foreigners and held the Muslims at bay.  Tens of thousands of Kodavas had been killed by the invaders.  They had not been dominated by anyone else until the British took over rule in the year 1834 by trickery.

The Kodavas are hospitable and pay much attention to personal hygiene and cleanliness.  They strive to keep their homes and surroundings clean and neat.  The freshness of jungle with rain forest, the altitude of a hill station with its pleasant summers, and the fascinating people of Kodagu with their quaint customs makes Kodagu a worthy place to visit.