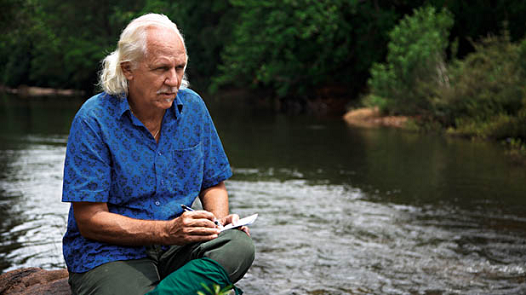 Romulus Whitaker was only four years old when he caught his first snake in the country estate that he shared with his mother and sister in northern New York State. It was the beginning of a fascination with reptiles and a journey to conserve nature.

Although born in the United States in 1943, Rom Whitaker grew up in India where he nurtured his passion for reptiles exploring the wild as a student in a boarding school up in the mountains in south India. The world-renowned herpetologist and author is changing perceptions of reptiles through his innovative work while championing the cause for conservation of India’s rich biodiversity.

In an exclusive interview with Fatima Chowdhury Romulus Whitaker shares some of his thoughts and interesting experience through the course of his work.

What is it about reptiles that got you fascinated about them?

My love affair with reptiles began before my 'age of reason', in fact I was catching and keeping snakes at the tender age of 5 years, in my native New York State. Luckily I had a mother who encouraged me in my strange pursuits.

What are some of the most fascinating aspects of your job as a Reptile Expert?

Everyday is a fascinating experience, simply because so little is yet known about reptiles, as compared with more 'obvious' creatures like birds and butterflies. Perhaps most interesting of all is the fact that once you have studied and been close to reptiles long enough, you realize that they too are complex beings with individual personalities, some nice and some not so nice. Venomous snakes have their tremendous killing power yet they are timid and shy and want nothing more than to stay clear of horribly dangerous human beings.

In the course of your career, you must have had several close and dangerous encounters with crocs, komodo dragons and snakes.  Is there any incident that stands out in your mind which left you completely speechless?

Perhaps the incident that sticks in my mind most clearly is the first time I encountered a king cobra. It was in Agumbe (where we now have a research station) and I saw the black tail of a large snake disappearing into the bushes. Thinking it was a large, harmless rat snake I did what any snake hunter would do, I leaped on it. I managed to grab the tail and in my now prone position I looked up to see the hood of a large king cobra spread over me and a pair of not so friendly eyes glaring down at me. I needed no more encouragement and quickly released the king cobra's tail and rolled out of the way. Luckily the snake didn't want to tangle with me any more than I wanted to tangle with it and it slid away into the forest. Phew!

What are the challenges you have faced to dispel some of the misconceptions people have about reptiles?

The main challenge is to get people to realize that their old folk tales and beliefs about snakes are usually wrong and that the reality of snakes and other reptiles is of course much more interesting than these old tales. People have a tendency to think that wild animals are 'out to get them' when actually it's just the opposite.

In 1970, you created India’s first snake park which generated a lot of media interest and of course greater public awareness about various reptiles. Do you think perceptions about reptiles are changing with the help of media and initiative by individuals like yourself? 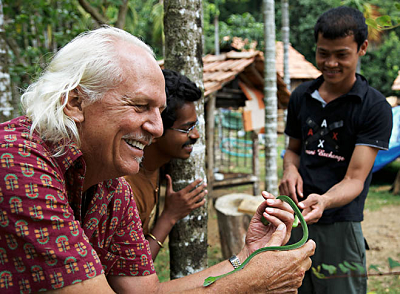 The Madras Snake Park was the forerunner, but since then a number of similar parks have come up all over the country. These have certainly created awareness and now in most major cities, instead of reaching for a stick when a snake is seen, people reach for the phone and call the local snake rescuer to come and take the snake away to a safe place away from people. The media has a lot to do with this raised awareness and should do even more to spread the word about treating snakebite with anti-venom serum instead of going to quack traditional healers who are partly responsible for the huge death rate by snakebite in India. There is NO treatment for venomous snakebite other than anti-venom serum! FULLSTOP

Do you think there is adequate support / assistance for conservation of reptiles today or more can be done? How?

Certainly reptiles are still not too high in the popularity charts and there is always a need for understanding the misunderstood creatures that we share the planet with. More media exposure to the facts about reptiles, their usefulness to us in controlling rodents and cleaning the waterways (in the case of crocs) and controlling harmful insects in the case of lizards, will certainly help their plight.

In the course of your career what has been one of the most exciting and memorable experiences and why?

It's kind of hard to say which experiences stand out as being exciting and memorable, in my kind of life excitement is never far away. I just got back from Rajasthan where we spend days in the desert searching for saw-scaled vipers, Sind kraits and black cobras with an Irula tribal from Tamil Nadu and a local Rajasthani snake catcher. The week before that I was in Assam, search for pit vipers in the rain forest. At home here in Chengalpattu we had to deal with a Russells viper that seems to like our garden and next week I'm likely to be in Agumbe radio-tracking king cobras: never dull moment (except when I have to go into the awful city to do some chore like renew my driver's license!).

What do you hope people will take away from your work and films on reptiles? Is there anything you would like to do in the future?

Well, I know people are not going to start hugging reptiles overnight, but I do feel we are making headway by writing, making films and bringing people to the Madras Crocodile Bank and teaching them about the wonders of the reptile world. What will I do in future? Probably just what I'm doing right now. One project is to promote research on snake venoms and the perfection of the anti-venom serum against snakebite in India. All good fun!