The morning is early, the dawn breaking over Kota in waves of pink and orange, the dry air begging for rain and relief.  We crowd into the car with Kota and Manisha's son safely ensconced in the back with the ladies, Kota and myself in the front.  We stop by Kota Barrage, damming the Chambal river and bringing water and electricity to the town and its region.  A few wrong turns later, we're on the highway to Bundi - an important city in Rajasthan once, a fort commanding the hilltop over a lake, and a palace nestling on the slopes overlooking the town below.  The ride from Kota is short.  We look at accommodation in Bundi town, a heritage haveli distinguished by small rooms with no view and an overpriced hotel with little of anything.  The palace towers over the historic center in terraces punctuated by jharokhas and intricately carved balconies. It's a little outside the town that we finally settle for a state government guest house next to the lake, a water body enclosed by hills with lotus flowers at its edges and chattris constructed in the middle.  The fort overlooks the valley, old and ominous in its stark outline.  The guest house is manned principally by one Swaroop who is happily drunk at this early hour, 8 in the morning.  We get our rooms and I immediately order a chilled beer, the only one the hotel has.  Surviving hostile stares by the girls, Kota and I open the bottle and down a glass in double-quick time. 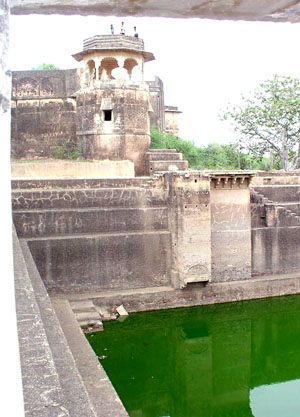 I go through this irritating wait of being impatient to go to town and wander around, while the rest, it seems, are content to hang around and talk.  To be fair, Kota and Manisha have just come through a hectic social do, and Megha has been to Bundi before.  This doesn't help, of course, and the hours tick away in small talk.

Rain comes down, drenching Bundi and turning the lake into a mist of vapour and cloud and half-seen chattris vanishing in and out of the water.  The aftermath is this slow languourous weather where everything seems a little more blurry than usual.  The water dries up really fast, soaked up by the thirsty earth.  As if to compensate, lunch is a fiery affair of Swaroop's finest, which consists of destroyed vegetables soaked in oil and a spice mix that mostly consists of chilli.  We're blown away by the food with our stomachs left in helpless anguish, and this more than anything else finally serves as impetus to leave. 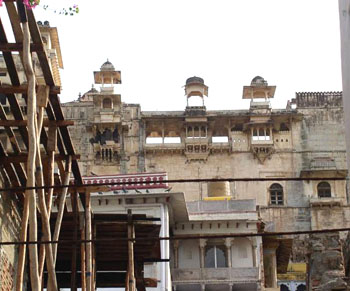 Bundi fort is in bad repair, but still retains a certain magnificence and solemnity.  Baolis pepper the insides, and remainders of fine wall murals leave one aching for a program of conservation before this - and countless other treasures all over the country - are wiped out forever.  An inscription attests to the age of one of the Baolis, 1533 AD.  A time when Akbar was ruling over Delhi, and when Mughals and Rajputs began the first of the alliances that would serve them both so well over the next two centuries.

If the fort is strong and commanding, Bundi Palace epitomises the best of Rajput hill architecture, waves of successive terraces shimmering out from the hillside with balconies, jharokhas and perforated railings adding finesse and texture to surfaces that glow burnished gold in the sun and cast shade and shadow in the evenings and morning.  The climb up to the palace is a steep walk.  Inside, well-preserved paintings and gardens testify to what can be done if a serious attempt is made for conservation, combined with a state-funded program of education about the country's heritage.

The interior of Bundi palace is a network of courtyards surrounded by pillared corridors, some with alcoves and enclaves once again showcasing Rajput art depicting the court, the royal hunt and possibly members of the royal household.  Below, the town stretches out in hues of orange, yellow and blue, a dense matrix of settlement dotted with the occasional temple and open space.  I'm carrying the baby on my back and Kota has taken up the role of photographer, clicking away while Manisha feeds the hungry baby with bananas.  It seems he likes these a lot, munching hungrily as he curls the ends of my hair with tiny fingers.  The reality of the town itself is quite different, squalid and overflowing with muck in narrow lanes crowded with cars, buses and the inevitable cow.  In this sense, perhaps little has changed in the centuries, with the people still struggling for a living in the shadow of the fort and palace up above. 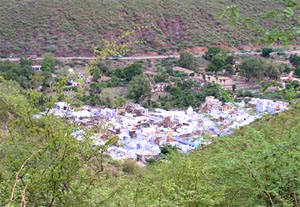 It is a symbolic sort of relationship, the palace depending for its survival on the town below, the town in turn dependent on the countryside for food and forage, the whole linked to the next kingdom by ties of blood and marriage.  There are new ties now, shiny ATM machines incongruously placed amidst all the confusion, guarded by men with guns.  These are private banks, stitching together India into another empire, the dust of the day kept out by glass and labour on the cheap.  This is 'development' and 'globalisation' in your face, when a small town in India is connected to the world financial system, a node in the world wide web of commerce and capitalism.

And outside, the buffaloes still munch slowly, their bodies mirrored in the mud below, and a road laying machine clears swathes of land for a new road.  At night, the chattri in the lake shimmers with light, we blow out puffs of smoke into the evening sky, reflecting in a time of silence over the years gone by and perhaps, those still to come.  Separated by time and distance and happening, we come together once again in a small forgotten town in India, global citizens of the new world with nothing to say.  Beer is good for talk, except when there is no more talk, and nothing left to be said.

The next morning and its time to say goodbye.  We wait for a bus at an empty crossroad, surrounded by curious lookers-on.  Megha and I finally hire a jeep to Jaipur, a venerable old Mahindra piloted by two aggressive drivers who are happy in each other's company and make light work of the road.  The four-hour drive is hot in the open jeep, and the sun's heat exacerbated by the dry air whipping around us.  Still the landscape remains a thing of beauty; dried keekar coming out of the earth, sand hills hiding mines from where stone is wrought from the bowels of the ground. 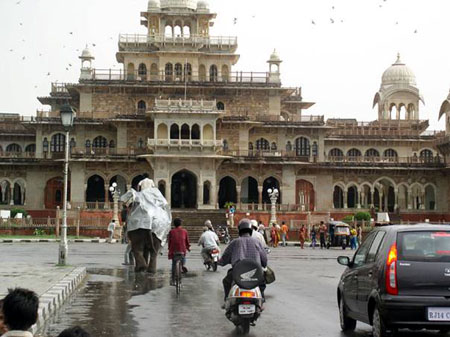 And then there is Jaipur town, a big city, the capital of Rajasthan, steeped in history and stories, overlooked by the magnificent Nalagarh fort, Sawai Jai Singh's capital - the king who took more than a passing interest in the occult, in astronomy and other arts, and whose court attracted the best minds for a time. It is here, of all the unlikely places, that it finally rains, the water drenching the city with a sheet of wetness that makes the pink of the buildings a deeper ochre and orange, and children come out to play.  An elephant swings its way nonchalantly across it all.  I have a irate policemen to deal with while photographing, and Megha decides to go see a friend. 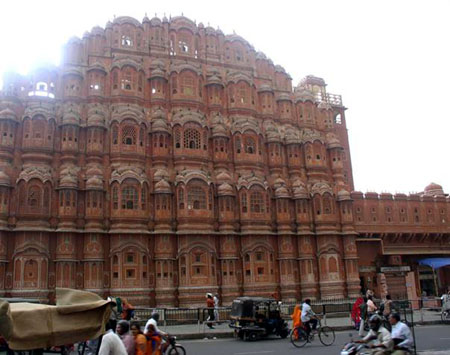 It is the first time we have parted company in more than four days now.  There is a little time to reflect on the values of a good travelling companion, and Megha is certainly one, herself bitten by the urge to see new things and talk to people.  We complement each other well like this, but even the best company needs to be alone for a while, if only to realise the value of the other.  I take a rickshaw through Jaipur, stopping in the rain at the Hawa Mahal, where a man asks me if I am from Spain while trying to sell me a kurta.

So what then is one's own 'self'?  It seems that it is as much a construction, an image, a reflection, or a composite, if you will, made of pieces that others see.  And so there are two selves, the first an external that changes as it is seen through other's eyes, and the other the inner self, the one that stays the same, the one that says 'I am me', or 'That thou art' - the 'tat tvam asi', the one that is only defined by negation, being everything that everything else is not.  What then, is 'me'? The outer, or the inner, and what and where is the junction between the two?  Am I Indian, or something else?  These are constructions of reality, mosaics whose only permanence lies in the truth that they will change, constantly and continuously.  Here I am, in Rajasthan, a foreigner in my own land, re-thinking not only what is mine and what is not, but also what is 'me'.  This search for the self has occupied the thoughts of the greatest of men through all the ages of Man, thinkers who have spent their entire adult lives in the search for self and reality.  The best ones we call Krishna, Jesus and Mohammed, and the worst we call mad. This need of the human race to categorise and attach labels is perhaps still another version of the search for the truth - elusive, hiding and forever changing.

There is little time now for more.  The bus ride back to Delhi is at night, and we reach early in the morning.  Megha's house is comfortable, but it is not mine.  I leave while she is still sleeping.  For me there is another bus back to Chandigarh, a circle completing, a journey almost done.  Here now once again, six days later, little has changed.  The dust is still in the air, the newness of the city trying unsuccessfully to blot out an ancient land.  Nothing has changed, and yet everything has.  Where does the old end, and the new begin?  Where is the line between madness and sanity?  Where does the outer self end, and the inner begin?  And finally, who has the right to decide these things?  I do not know the answers to all these questions, and in the routine of things, do not have the time to think about them.  Perhaps it is best that some questions are unanswered, that there is, in the end of all things, another question.  For what is a condition - to know that you do not know it all, or to think that you do? One of these is Life itself, and the other is a dead end.

And then the bus stops, and I am home, and the certainty of some things is precious in a changing world.