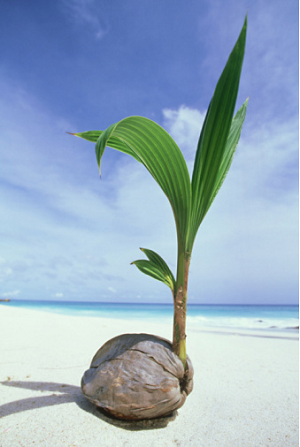 The question of creation has fascinated humankind throughout the ages. "Where do we come from?" "How did life begin?" Almost every human culture told or tells a creation story; the need to do so seems to be a universally human phenomenon. We need to understand our origin nearly as much as we need to eat and breath. We begin asking these questions as children and continue refining our understanding as we mature, perhaps even as astrophysicists, cosmologists, archeologists, anthropologists, geneticists, or in some other field. Mythology, however, has answered this question many times over.

Unfortunately, many modern people deny the validity of mythology, likening it to fairy tales instead of sophisticatedly grasping its profound meaning and message. Or many naively make the fatal flaw of trying to turn their mythology into history or science. Mythology, however, can relate higher truths better than history and science in the way a great work of art conveys beauty and truth more effectively than a photograph can, or a great poem or novel captures truth better than a news article does. Grasping myth's significance and insight requires sophisticated interpretive skills; literal interpretations of myth will only miss the point and keep people stuck in spiritual naivety.

Creation mythology necessarily deals with the question of a Creator. Gnostic scriptures (though not them alone) define God as a symbol for what we cannot know or define. They insightfully remind us that we cannot not name God, because "since when does the child name the parent?"

To understand and benefit from creation mythology, we must learn to read it with a poetic eye. With this mature view, creation myth will not contradict science or history, but complement them. One version of the creation story in Hinduism beautifully gives us a myth that, when read properly, does not contradict current scientific theory. It goes something like this (from the Brihadaranyaka Upanishad):

In the beginning there was one Soul (purusha), eternal in time and space, the one without a second. In this pre-Big Bang state, no dualities existed: no up/down, here/there, good/evil, them/us, male/female, and so on. The Soul was a perfect unity, an eternal omnipresent oneness of being. The Soul (metaphorically speaking, of course) saw that it was alone and became frightened. It soon realized, however, that there was no cause to be afraid because no other existed to do any harm. This saddened the Soul, reminding it of its loneliness; existence before the Big Bang was boring. So the Soul decided to make a second by becoming two, male and female, creating the dualities. Though these two became separate, they were still one in spirit, sharing the same Soul. When they united as husband and wife, God and Goddess, they could remember that unity of Soul. (This is why the Kama Sutra teaches that we are incomplete without a spouse or soulmate, the other half of our true Self.) In that first union, life as we know it was conceived and the Mother Goddess gave birth to the universe - the mythological Big Bang.

The story goes on to tell how the Goddess turned herself into a cow, so the God became a bull; they conceived and gave birth to that species. She then became a horse, a goat, a sheep, an ant, and so on, with Him following her, creating all life thus. In each case, the Soul of each life is still one with the Original Soul, as a slice of apple, though not a whole apple, is still apple. For the first Soul said, "I am indeed this creation, for I created it all."

God is truly everywhere, not separate from creation. All of creation shares its spirit with that original Soul because the Soul is in all that It created. When we are born into human bodies and acquire consciousness, we forget that oneness of spirit and our shared origin. Yet opportunities to remember can be found in the bond between husband and wife, parent and child, brother and sister, friend and friend, neighbor and neighbor, and so on. These bonds can lead to the discovery of the true Self, the one without a second.

Creation myth about the Divine Mother and Father, in one form or another, is shared by most cultures throughout all human existence (excluding those based on the Bible, whose Adam and Eve are human; and Buddhism, which does not concern itself with the creation question). There are Ishtar and Tammuz of Ur, Phoenicia's Ashtarte and Melqart, Egypt's Isis and Osiris, Greece's Gaia and Uranus, India's Shiva and Parvarti/Shakti, the Yakima Mother Earth and the Great Chief Above, and the Osage Mother Moon and Father Sun. The oldest human art works ever found are statuettes of the Mother Goddess, suggesting that this myth is one shared by our ancestors, perhaps since the time humans first asked questions about existence.

We must, however, realize that our ancestors knew that the Sun God and the Moon or Earth Goddess were symbols for the unknowable. They were not idolaters as some religiously intolerant groups might suggest; no learned people actually worshipped the sun as God literally. The ever-dying, ever-resurrecting sun is, however, the perfect symbol for God or the Soul, that eternal part of ourselves. Our ancestors wisely looked to nature for clues of our origin and ultimate destiny. As the sun dies yet rises again daily, as the year ends and another begins, as plants die and are reborn of the parent's seed, as stars die and eventually become the matter of new stars, so shall our true Self be reborn eternally.

Unlike Christian-Judeo thinking, which sets finite points of time for creation and the ultimate end to the world, Hinduism wisely teaches that there was no singular creation event, but that there have been an infinite number of universes and will be as many more. Since Hubble learned that the universe is expanding, scientists have wondered whether it will reverse its trend and eventually collapse in on itself or continue to expand eternally into nothingness. Either way, mythologically informed people can know the ultimate outcome. If it collapses in on itself, another Big Bang will occur.

If the universe expands and becomes an eternal expanse of nothingness, it will have become the theoretical pre-Big Bang cosmic soup again. The universe, like God and the Soul, is ever-dying and ever-reborn. And as the Gnostics have said, to know where we are going, we must first know from where we come. We share not only a common origin, but also a common destination, to return to that Unity of Soul that is eternally reborn.

Note:
For further reading about this topic, Joseph Campbell's The Masks of God, a four-book series on Ancient, Oriental, Occidental, and Creative Mythology, expertly investigates mythology and religion from all over the world throughout the ages by presenting bountiful myths from many cultures along with archaeological evidence for his theory of "the unity of the race of man, not only in its biology, but also in its spiritual history." Campbell is a storyteller's storyteller, masterfully knowledgeable and eloquent. These books are profoundly enlightening and uplifting.