Perished on the Roof of the World

The vast plateau of Ladakh, the coldest desert in the World is also knows as the roof of the World. Falling in the J& K state Leh is the district headquarters of Ladakh. During the winters the temperatures fall below the freezing point. While working there we used to often joke that during winters, everything including the words freeze! Leh district, with an area of 45,110 square kilometer has the distinction of being the second largest district of India in terms of area. Though population wise it may be one of the most sparsely populated districts! 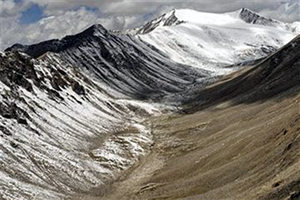 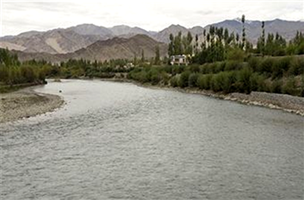 Water Glaciers and the Indus River passing through Ladakh

Ladakh was opened to the tourists only in the last decade and attracts people from all countries. It is still totally isolated from the modern world. The innocence in the eyes of the locals is seen to be believed.

Our urban planet is unique. Here the three main components of environment, the atmosphere, lithosphere and hydrosphere normally remain in a state of balance and maintain a semblance of tranquility around. They are like triplets and if one of them goes haywire then the other two get easily affected. Supposing the atmosphere leads to a higher rainfall or snow, the sudden increase in the volume of water upsets the hydrosphere and the rivers start flooding the lithosphere. This was just to illustrate the point that a slight upset in the natural system can cause a major disaster on the land, leading to death and destruction for the life.

This is what happened in Ladakh recently. Sixth August was barely a few minutes old when Leh area was struck by a heavy rainfall. 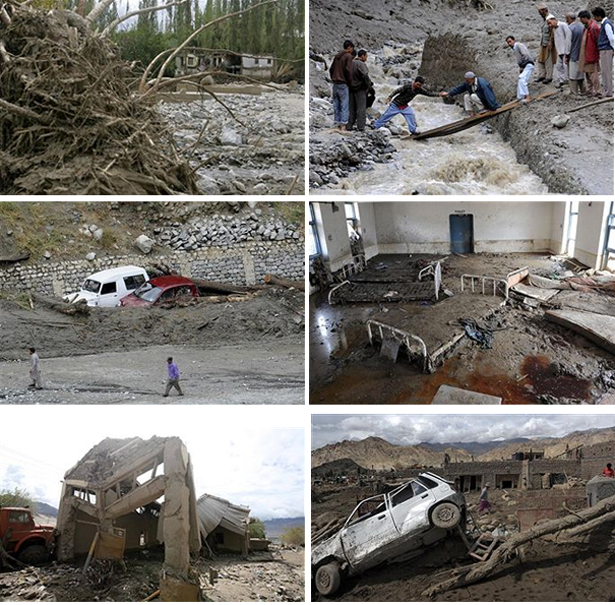 Images of Flash Floods, Mudslides and other devastation
caused by the sudden cloudbursts in early August 2010

The annals of climate describe Ladakh as a ‘rain less, cloudless country’. However, the old guidelines need to be revised in the view of the recent mishaps. Cloudbursts are not uncommon in the region of higher Himalayas. The sudden heavy rain makes the rivers spill over their channels.

In August 1967 a team of geologists from Geological Survey of India had just pitched camp at the base of Barashigri massif on 19th August when a very heavy snowfall started. By morning the tents were completely buried and only the small iron spikes of the tent poles were seen protruding above. The team had a harrowing time. One of the team members a ‘Tehsil Peon’- a local Lahuli Panchi Ram after a 72 hours ordeal managed to rescue the team, by ferrying all the members across the raging Chandra River. Fortunately the area had no habitation.

The high altitude areas, despite their geographical locations have a common problem of ‘mass wasting’. In these areas there is always attrition between the atmosphere and lithosphere. Temperatures are always low. As a result whatever moisture is there in the air enters the cracks and crevices of the rocks at night and condenses to become ice. With the Sun rise the temperature changes and this ice turns in to water. The expansion in volume is tremendous and almost sudden, leading to widening of cracks or even bursting of the rocks. Since these areas are above the tree line, there is hardly any vegetation to hold or stop the broken, shattered rock mass from remaining stable on the slope.

This rock waste produced is called the scree or talus. The scree keeps sliding down slope with the melt water of ice at the hill tops. Go any where in Ladakh and you find large fans of talus at the base of the mountains on the valley sides.

The Indus Valley in Ladakh was a glacial valley in the geological past. Like any valley glacier it has several subsidiary glaciers or tributary glaciers on the sides, many of them were hanging valleys or glacial valleys at an altitude much higher than the main valley. In all these valleys a large amount of scree and moraines are piled up in the main Indus valley and the tributaries. The moraines and the scree can move without any notice in case of a heavy rainfall/snowfall or an earthquake. In short any thing that disturbs their tranquility can make the talus move.

On the dreadful night there was a heavy downpour followed by a massive cloudburst over Leh. Which lead to innumerable debris (scree) flows, mud flows and sand flows. All these different terms are there because of the variety of slope forming material. Whatever the slopes were composed of began to slide and flow as a viscous mass. The slopes made of such unconsolidated material are naturally porous and as water seeps in, it begins to act as a lubricant and the entire mass of material moves down with gravity. So much is the velocity of such flows that even after reaching the valley it pushes ahead and crushes everything in its wake.

All this happened in the dead of the night when the residents were fast asleep. The very thought of a sudden burial under a 50m thick paste of scree, sand or mud is dreadful. What must have been the plight of the residents in parts of Leh town, Sabu, Choklamsar, Leh airport area, Nimu, Ney and Bajgo area around town can not be expressed in words.

A rapid reconnaissance was carried out by a team of geologists from Geological Survey Of India, immediately after the mishap. A mishap of this kind is not even recorded in the history, says the report of the survey.

The unconsolidated material lying on the slopes remains stationary normally. But with a sudden downpour of 240 mm rain within a span of 24 hours, the lose material got well lubricated and water added to its mass. The entire material had no problem in sliding down the slope. In Leh the Bus Stand, BSNL Building, Hospital complex and Radio Station are located within a radius of three km of Shakasaling Nala. This nala flows from an altitude of 3800m to 3410m to meet the Indus. The 400 meter drop makes it a fast flowing nala. The hills on both sides of the valley of this nala have ample lose material.

Almost a similar situation is there in Sabu nala says the report. The debris flow in Sabu village cost 11 lives and debris continued to choke the village and the nala for about 45 minutes. The same phenomenon took 48 lives in Choklamsar village, which was almost buried under a four meter thick pile of debris.

Druk Padma Karpos Institute at Stokma was affected by mud flow and the classrooms were flooded with thick layers of mud. It is interesting to know that this school building was used for shooting of movie 3Idiots and thereafter the Institute is more popular as Rancho’s school.

Although the cloud burst of 5-6 August was well reported but there was a prelude to this on the night of 4 and 5 August, 2010. Debris from Nimu, Umlah and Phyang nalas killed 11 people. This was perhaps a warning from the nature but it was either not understood or ignored.

The norms for inhabiting these remote high altitude areas in the light of recent mishaps need a complete rethinking. The might of the scree and lose material on the hill slopes as seen in mishap has proved that the selection of site must take in to account the geomorphology of the area. Developing habitations close to the water bodies is an old fascination of human beings. In the high altitude terrains where the atmospheric agencies produce lot of rock waste and past glaciers have left plenty of rock flour, the chances of mobilization of such lose material are much more than as in lower altitudes. Moreover being far above tree line the vegetation cover is almost zero.

Therefore safety lies in living out of the reach of the scree lined slopes. Secondly the ‘development’ projects must take in to consideration that any change in slope can cause heavy damage in the times to come. The word development is in quotes here because our planners think that development means only construction of roads and like. Of course engineering solutions are there for almost everything, but most of the time they cost a lot and can not be implemented.

Instead of challenging the nature it is best to understand it and play safe.