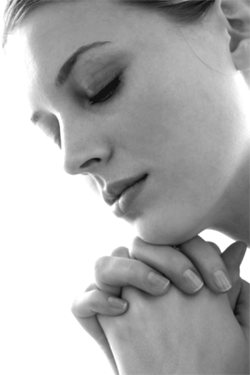 In essence prayer means asking or expecting something from a higher authority, while worship means offering or giving something to it. Most of the time God or Self is taken as the higher authority and thus most prayers concern with the religious or spiritual aspects of life. Everyone has had prayed to God in difficulty; when all the avenues appear to have closed one tries to seek the escape from the suffering through God. Thus, prayer originates from our helplessness and want. Prayer is the outcome of our ignorance or lack of knowledge about our true nature. And helplessness, in turn, is the product of our false identification with body and mind. The content or nature of prayer points to the grossness (crudeness) or refinement (subtlety) of this identification. 'O God, please relieve me from this pain,' such a prayer points to the attachment with the body, while, 'O God, please help me complete this novel, or picture, or sculpture,' is a kind of more refined attachment with the mind. As can be seen, the second prayer is a bit superior to the first.

As ethics and morality grow, as the person progresses spiritually, the content of prayer changes to that extent. For instance, 'O God, please save my son; he is still very young,' prays a father for his son injured in ghastly accident, or, 'O God, my neighbor is a good fellow, he is honest; save him from the ignominy of police custody,' prays a person when his neighbor is implicated in a false case of financial embezzlement. If we widen the scope still further, we encounter mass prayers in times of war or natural calamities. Thus prayers have their gradations and evolution that exhibit progress from selfishness to selflessness. Naturally those prayers that seek betterment of all are good prayers.

Thirdly, an individual can himself progress from lower rung to higher rung. One example from the life of Swami Vivekananda can be cited as an example. The real life event of a magnitude of a 'disaster' occurred in the early age of Narendranath (Swami Vivekananda). His father suddenly died leaving the family in great financial crisis. Swami Vivekananda could not get any job to support his family. Therefore, he said to Sri Ramakrishna, 'O Sir, please pray to the Mother so that my family is supplied with coarse grain and clothes at least. I know the Mother listens to you and definitely grants your prayers.'

That night he and the Master were alone in the Kali Temple, and Swami Vivekananda went to the Mother's shrine to pray and ask for material things of urgent necessity. However, as Swami Vivekananda entered the shrine, all that he could say was, 'O Mother, please give me Jnana and Bhakti.' Thus praying, he returned to where Sri Ramakrishna was waiting for him. The Master inquired, "Naren, have you asked for food and money required for your family?" Swami Vivekananda, surprised as he was as well, replied, 'Why, no sir! Thrice Swami Vivekananda went to Ma Kali, but could not utter the word about money, clothes, food, and grains; but instead all the three times he prayed to the Mother for Jnana and Bhakti!

Sri Krishna in the Gita says: Four types of persons pray to me:

Out of these the first one can be excused for he prays out of panic and helplessness, and the second one remembers the Lord only when his needs cannot be fulfilled. The third and the fourth categories are of selfless aspirants. The third devotee - the curious one, like a scientist, tries to know the secrets of this mind-boggling universe of name and forms, of joys and sorrows, etc. He says: 'O Lord, I do not understand the intricacies of this universal order (or disorder); pray, tell me the secrets of this Sun and the Moon, the Earth and all your creation!' But the fourth, the Jnani, prays because he has had realized the glory of the Self. 'Lead me from darkness to Light, lead me from ignorance to Knowledge, lead me from mortality to Immortality,' is one such true spiritual prayer.

The Lord naturally loves His fourth devotee who prays Him through Knowledge and whose prayer transforms automatically into the highest form of worship. In Jnana one finds the true and esthetic synthesis of prayer and worship; in Jnana we find beauty of simultaneous complaint and reverence of a sadhaka towards God. However, the highest prayer comes from the highest Knowledge of Advaita. Albeit, when such a person comes down to ordinary level of human consciousness his knowledge of universal solidarity stays with him and his prayer becomes universal in appeal and compassionate in content. The highest Advaita prayer according to Swami Vivekananda is: "Rise thou effulgent one, rise thou who art always pure, rise thou birthless and deathless, rise almighty, and manifest thy true nature.

No prayer should ever be ridiculed or despised, howsoever crude it might be, and howsoever selfish it might appear; for, in every prayer one finds the acceptance of higher authority of God. Every person who prays accepts the higher Self and his ego takes a secondary place at least for that period of time. Gradually, with some inexplicable factors, his power of discrimination leads him to selfless prayer in course of time.