Is Future of the Ganga Bleak! 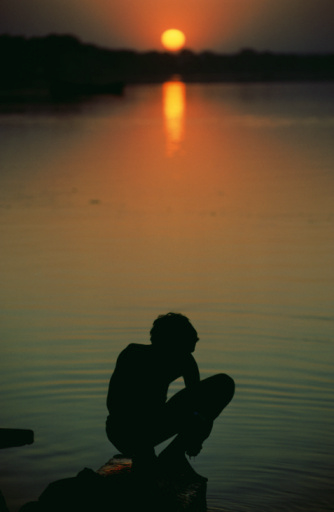 Ganga, the holy River, it is said when the King Bhagirath managed to bring it to the earth, came with such a force that he had to invoke the help of Lord Shiva to contain the River’s might. The Ganga was lost in the labyrinths of long tresses of the Lord and by the time it emerged again, it was much quieter river. Even today, the Ganga’s might and roar has to be seen to be believed in the higher Himalayas, where it seems to be attempting to break the shackles and rush towards the ultimate destination, the Sea!

It is a strange dilemma, on one hand the climatologists are shouting hoarse that the melting of glaciers that feed the Ganga has increased tremendously and the river waters may play havoc in the plains and even raise the level of the sea to submerge the coastal population; while on the other hand, geological facts and observations on the River, downstream of Farakka Barrage have a different story. The River near its final destination has dwindled to a mere streak. There is an apprehension of even the River drying up and vanishing partially somewhat like its sister Saraswati.

What are the possibilities, whether the River will drown everything in its wake or will get lost in the sands of time, needs to be examined today. Ganga is considered as ‘Ma’ (the mother) by the Hindus. So deep is the faith that if a dead is consigned to flames on the bank of Ganga, his soul goes straight to the heaven and one has just to drive to Varanasi to see this. On the approach roads to the town, one can see people carrying their dead on all types of vehicles, including the Bicycle.

Varanasi for the Hindus is what Jerusalem is to Christians. Varanasi is sacred because of the Ganga. Without the River the place is as good as any other congested, slow moving town of north India. The protagonists of glaciers melting off due to climate change believe that once the glaciers stop supplying waters to the Ganga, the River would dry up. Prof. I.B. Singh, a renowned authority on Ganga, says that ‘The River will not dry up even if Gangotri melts completely’. And he has reasons to believe so. The River draws its supply of water in the plains, mainly from the aquifers and maintains a give and take relationship.

Ganga will never dry of natural causes. If it dries up then perhaps we will be held responsible!

H.S. Sen, a specialist on Ganga says in one of his recent papers that ‘ecological sustainability of Ganga in south Bengal (below Farakka Barrage) in India and almost the entire Bangladesh (command area under Ganga-Padma river system) is under increasing threat…’ Sen attributes the threat to unplanned diversion of waters of Ganga between Sagar and Malda.

A river like Ganga which becomes slow and sluggish near its final destination, that is the Sea struggles hard to maintain its journey. In case of Ganga its woes were added because of a neo-tectonic movement during 16th to 18th centuries, which tilted the tidally dominated area (TDA) of Ganga. For this movement the zone between Sagar and Malda acted as a hinge. To understand this, imagine a giant table which is tilted in a particular direction. Water poured from the top of the table will naturally flow in the direction of the tilt. Now if by some hinge mechanism the farthest part of the table can be tilted slightly in another direction, part of water will flow in that direction too.

This is what happened in case of the Ganga. The river channel at the delta gets so sluggish that it gets diversified into several channels. To cap it all the neotectonic movement (tectonism that took place in the past 10,000 years) made the Ganga flow through the River Padma in Bangladesh leaving its earlier channel the Hugli only as a mere tidal channel. Before the tilt Ganga splayed in to several distributaries which formed a network of channels and creeks which covered the Sunderban Delta and adjoining parts of the TDA. Alas now all those are merely brackish water channels of the delta!

With the British government in saddle it was felt that a barrage across the Ganga would solve the problem of reduced water in its channels. This would also help in irrigation of crops in the agrarian belt of land now in Bangladesh. Although the idea was first mooted by one engineer Cotton in 1862, but at that time there was no decision on the location of such a barrage. Much later after the Independence the site for the barrage at Farakka was selected and the construction began in 1962. The barrage was commissioned in 1971.

Whenever, a barrage and or a dam is constructed two lobbies emerge - one in favor and the other against. Farakka was no exception. Controversies apart the barrage was constructed for the purpose of supplying uninterrupted water to the Hugli channel, without jeopardizing the flow of Ganga water to Bangladesh. Alas the theoretical models developed by the hydraulic engineers of those days could not prove foolproof in real time. As a result the river carries less water but more silt. The Ganga-Brahmputra Rivers jointly carry and dump a load of 1667 million tons of sediments each year. The quantity may be debatable, but it is a fact that these two river systems are the largest carriers of silt world over.

Let us imagine a river confined in its channel in the mountains. Actually there is no need to imagine because all the rivers while within their mountain regime are jacketed by the walls of the valleys. Wherever ground slope is less, the rivers keep dumping their own load on their bed and move sluggishly ahead. At many places the river bed levels have risen embarrassingly higher. Upon reaching the plains the rivers have the freedom to flood the channels annually and shed some of the excess load in the process. The rapid growth of urban centres (particularly in Ganga valley) led to erection of bunds to save the inhabitants from the ire of the river. What the river can do against the humans? It can only leave its load which the channel hydraulics does not permit to be moved and push ahead. As a result the channel of the river remains clogged with silt all through. Near the sea the ground slope is almost zero. Here the silt load becomes a headache for the river. It keeps changing courses, diversifying into newer channels during each rainy season.

The dynamic equilibrium of the River Ganga and its tributaries downstream of Farakka Barrage has been largely disturbed due to inadequate planning for the construction of the barrage, says Sen. The large amount of sedimentation load and reduction in the cross section of the River have immediate impact on loss of soil due to erosion of the river banks and floods, says Sen. These floods affect the population on both banks of the Bhagirathi River in the area. In addition, in order to navigate through Kolkata Port the river beds now have to be continuously dredged. This impedes the movement of the ships and also adds to the cost.

The sluggish channel gets polluted easily and that ultimately affects the quality of water as well. During the floods, normally soil gets recharged every year. But now with streams getting reduced to silt laden, trickles of water the soil quality too is deteriorating every year in the region. Studies carried out in Bangladesh show that the River salinity has increased in the Sunderbans Region. In India however, such studies are lacking as of now.

It is high time that the National Ganga River Basin Authority under the Government of India conducts a detailed survey and formulates a plan ensure a holistic development of the Ganga Basin downstream of the Farakka Barrage. In order to achieve this naturally all the water that comes to Ganga in the upstream region, including the Himalayas will have to be taken in to account. Not only water, but the volume of the sediment carried by the River will also have to be monitored on regular basis.

It is time that the Government starts to view Ganga in its full entity and not in pieces. The states through which the river and its tributaries pass, need to sit together and discuss and sort out their plans to ‘jacket’ or dam the river at will.

An interesting anecdote which I heard from the Magsaysay award winner, the waterman of India Mr. Rajendra Singh would illustrate my point here.

When the Ganga descended from the heavens it came with a great force and began to flow through the plains. People were just overwhelmed at the sight of the soul purifying river. Soon people on the banks of the river started clamoring for their share of water and fights ensued. Those days people were governed by the sages. Therefore they went to Rishikesh to sort out their issues. They were advised by the sages to form a seven member committee to look after the Ganga. This committee was supposed to appoint ‘Mahajans’ all along the route to collect taxes for maintenance of the River.

The moral of the story is that even during mythic times, people were conscious about the maintenance of the river. Therefore in the present context the idea of Sen is quite plausible to regulate the water flow through construction of structures and diversion of water at strategic points along the river system upstream in order to ensure that minimal required water flows to and through the Farakka Barrage.

A word of caution is that if things are allowed to continue in the present state, it might be too late. The future of the Ganga as of now looks bleak at the tail end.