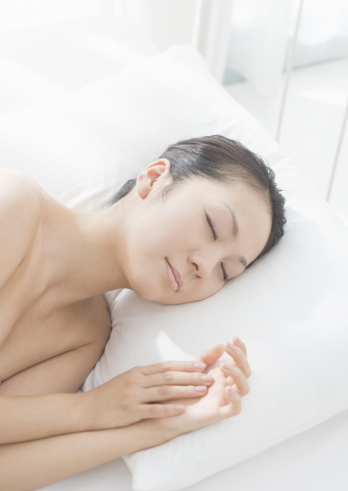 Though a great deal of research in sleep and dreams has been done world over, yet why we sleep has still remained a mystery. The present scientifically accepted reason is that it helps to consolidate our memories and remove the unnecessary information. Thus scientists say that during sleep when the inputs from our five senses are almost zero, the “mind/brain” takes stock of itself and helps in consolidation of knowledge learned during the day.

I however feel, that we sleep because it is like a forced meditation and just like meditation invigorates and charges our batteries so does a good night sleep.

During sleep we go through four or five cycles of deep sleep and dreaming episodes. Each of these cycles is of 90 minutes duration. Electroencephalography (EEG) studies done on human brain (during sleep) show that deep sleep is characterized by production of low frequency (1-4 Hz) Delta waves which are known to help produce life and mood-enhancing chemicals. This stage is also characterized by us being totally unaware of the surroundings. On the other hand dreaming episodes characterized by rapid eye movement (REM) are of light sleep kind from which one can be woken up quite easily. Thus when we wake up after a good deep sleep it is very refreshing and invigorating.

Similarly it seems that in deep Samadhi one also produces Delta waves, though most of the studies of EEG and functional magnetic resonance imaging (fMRI) on meditating brain show prevalence of Alpha waves (8-13 Hz). This could be because the modern methods of EEG and fMRI are quite invasive and are unhelpful for deep meditation. The noise and intense magnetic field of fMRI and too many electrical wires of EEG dangling around the subjects’ head do not create a conducive environment for deep meditation! Nevertheless studies of EEG on some subjects have shown that in very deep meditation there is a spike in Delta wave production.

Thus the anecdotal data of great yogis in deep meditation provide the only proof that an outward sign of loosing complete consciousness is similar to those in deep sleep. For example the Indian saint Ramakrishna, when he achieved enlightenment, was completely oblivious to the world for almost 6 months. In order to keep him alive during this ti
me he was force-fed by his guru.

As the deep sleep takes place, most of the peripheral brain neuron activity either reduces drastically or shuts down and only the central portion of the brain – seat of autonomous nervous system works. This region is also the place where long term memories are stored and where memory consolidation takes place.

An interesting aspect of peripheral brain shut-down could be the unraveling of day-long memories. Lots of irrelevant information takes up memory space and as the peripheral brain shuts down these memories get dissolved. This dissolution allows the brain to increase its processing power for yet another day.

Similarly deep meditation also allows removal of Sanskars or memories as Sage Patanjali has stated and this could be a probable mechanism to do so. In fact Patanjali defines Yoga as suppression of thought waves and low frequency Delta waves in deep sleep could be a manifestation of this process.

In case the deep sleep is disrupted the memory dissolution does not take place and hence the memory knots keep on growing resulting in irritable moods, short tempers etc. There is also a growing body of data in sleep research that in the large portion of people who are not getting enough restful sleep the incidence of diabetes, heart problems and even cancer are increasing.

The production of Delta waves is only possible in a big human brain. All life forms sleep but the sleep of most animals is shallow since they have to be alert to the external dangers. Thus their sleep is in REM mode.

Brain under anesthesia also produces low frequency waves but only in a fragmented brain. The communication between different parts of brain is stopped by anesthesia chemicals. However in deep sleep the whole brain is active and is similar to that in deep meditation.

So how do we induce deep sleep? A possible way is by doing daily vigorous exercise and meditation. Both these activities help in dissolving temporary memory knots and producing conditions for better sleep.

Deep sleep is also helped by reducing external inputs like sound, light etc. Thus people who sleep in lighted environment do not get very deep sleep though extensive REM activity take s place. Similarly when there are too many worries and the mind is not at peace the sleep is affected and one cannot have a deep sleep.