Today, male sperm counts around the world are dropping fast at a rate of two per cent every year and have more than halved in the past 50 years. All over the world, reports of declining sperm quality and increasing male infertility attributable to low sperm count and poor sperm motility and morphology are making the rounds.
Indeed, it is becoming more challenging for the typical African, Asian, American or European male to  reproduce his own kind. Normally, a man’s  fertility declines as  he ages,  So what could be responsible for this rapid decline?
With 40 percent of fertility issues being male related, male infertility is becoming more predominant as a result of men being diagnosed with low sperm count and poor motility, more  frequently, the man is being identified as the reason why couples are not getting pregnant.
Despite fact that many of the sperm conditions affecting male fertility are preventable or reversible, approximately two thirds of infertile men have sperm production problems, either because enough sperm is not being made, or the sperm is not functioning properly or a combination of both problems.
Male infertility can be caused by various factors such as hormone disorders, illness, injury to reproductive anatomy, obstruction or sexual dysfunction, etc. These factors can temporarily or permanently affect sperm and prevent conception.
Risk factors every man must know Low sperm counts or poor sperm motility may be due to environmental toxins such as chemicals, radiation, drugs, heavy metal exposure, cigarette smoking, excessive alcohol use, street drug use and pollution. Drugs such as cimetidine and ranitidine have both been reported to decrease sperm count and produce impotence.
A school of is convinced that exposure to pesticides may be contributing to falling sperm counts. Because of this link, fertility experts are advising all men trying to conceive to switch to organic food or thoroughly scrub fruits and vegetables to cut their exposure to harmful chemicals.
Painters, decorators, printers, welders, builders, taxi drivers and office workers could also be at risk from male infertility. Heat can also reduce sperm production. Welders may be risking infertility because of the high temperatures associated with their work and the risk of exposure to metals such as lead. Heat can raise the temperature of the testicles which can cause a decline in sperm levels and scientists have recently discovered a link between high lead levels in semen and low fertility levels.
Hot baths, sitting for long periods of time and tight-fitting underwear that constricts the testes can all elevate temperatures long enough to suppress sperm production.
Taxi drivers and long-haul lorry drivers are thought to be at risk from sitting in the same position for long periods of time. This can raise the temperature of the testicles, causing sperm levels to drop.
Same thing goes for office workers who spend hours sitting in front of a computer. Scientists say you should take a break every 20 to 30 minutes to get away from your desk and help regulate the temperature of the testicles.
High stress levels can cause the body to release the hormone cortisol which is thought to interfere with sperm production.
HOW TO INCREASE SPERM COUNT AND RECOVER FROM MALE INFERTILITY ...
Read more at: http://www.ayurvedahimachal.com/index.php?page=completearticle&&id=23
You can also save our whatsapp number +91-98050-38733 to chat with us regarding your problems & treatment
With Warm Regards
Dr. Vipul Sharma 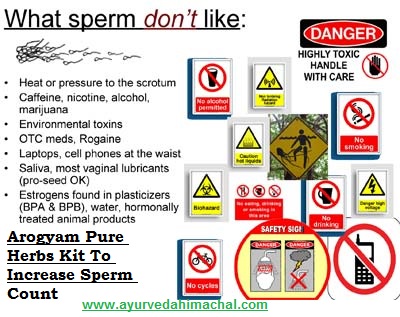