The Nobel Prize and Rabindranath - 6 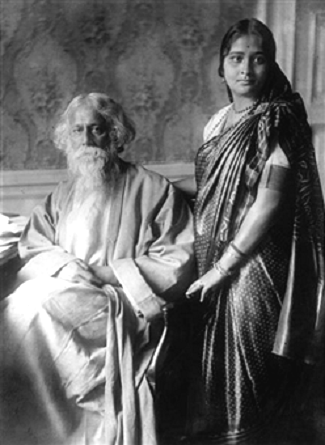 “In English there is a proverb – ‘To err is human’, specially so is the commission of errors by the Bengalis in their use of the English language. The other part of the proverb is – ‘to forgive is divine’. But when a Bengali uses English incorrectly no Englishman treats him in a divine manner.

We commit mistakes in our English because the English which we learn in schools is bookish. Those among us who have lived in England for a long time have grasped the spirit of that language well. They may commit grammatical mistakes like native Englishmen, but to commit idiomatic mistakes for them is rare. But those who learn English here at home may be able to save the grammar but they cannot avoid murdering the language. The Englishmen feel greatly amused by this.

For this we also feel very much tempted to take revenge by making fun of those Englishmen who commit mistakes in their use of the native language even though they have resided in this country for a long time, got enough opportunities and have taken pains to learn it well.”

This is what Rabindranath wrote about our English and their Bengali in his essay ‘Beames-er Bangla Byakaran’, published in Boloji in my translation as Rabindranath the Linguist. This explains why he was reluctant not only to translate his works into English but also to do his creative writings in that language. This also shows how the racial encounter between the natives and the Anglo-Indians manifested itself not only in politics but also in other areas. Here it was the encounter between our language and their language. Initially as merchants in their dealings with the natives they had to borrow native words and phrases which had no equivalents in their own tongue. So did their native clients. When in their reports the English merchants of the East India Company, for example, used them the Court of Directors must have found them unintelligible and objected to such practice. In their letter dated 26th February, 1617 the explanation of the Surat Factors to the Court was:

“We have forbidden the severall Factoryes from wrighting words in this languadge and refrayned itt ourselves, though in bookes of coppies we feare there are many which by wante of tyme for perusall we cannot rectefie or expresse”.

Both the Indians and the Anglo-Indians (the Englishmen resident in this country) however could not avoid this for practical reasons. It was inevitable. Equally inevitable were their chances of committing mistakes. As a result borrowed words and phrases often got new forms and nuances which, while serving their practical needs, must have also been a source of great amusement to both the parties. In this none of them seem to have suffered from any superiority or inferiority complex.

But when the mercantile measuring rod of the foreign merchants became the ruler’s scepter the racial encounter changed its character and manifested itself in a cultural encounter also. In his essay Rabindranath could but did not make fun of John Beames even though his Bangla Byakaran was full of mistakes. Instead he praised this Anglo-Indian for his passion for knowledge and his signal service to one aspect of the Bengali language – its grammar - neglected by the native Bengalis themselves. But the Anglo-Indians could not be as generous as Tagore. Beames was an exception. In their clubs and social gatherings the common Anglo-Indians gleefully made jokes about Indian English as well as the words and phrases they borrowed from the native languages. For this purpose they usually selected those higgledy-piggledy words and phrases they picked up from their poor and illiterate and half-literate naukars and chaukars whom they engaged in large numbers paying only a pittance. Another source was the so-called babu-English of native clerks and other subordinate government officials. This satisfied their sense of racial superiority. Even the famous Hobson-Jobson of Yule and Burnell – that ambitious kedgeree of a compilation of Anglo-Indian words and phrases - is not free from this vice. Eccentric, entertaining, full of curious details, the dictionary is very much of its time and an almost innate sense of British cultural superiority runs through the entire book.

The Anglo-Indians judged all the Indians by the standards of such servants and clerks and viewed their culture with great contempt. In their arrogance they remained unaware of the intellectual segment of the emerging English educated middle class. In a letter Edward Thompson, an English missionary who became a friend of Tagore after the Nobel award, was to complain about this to Rothenstein. These people were proud of their own culture but at the same time they had fallen in love with the English language for its rich literature. They absorbed what was best in the British culture. Many of them like Madhusudan and Bankim were so charmed by it that they made Milton and Scott their respective models. They began their literary career writing in English. They did not do so from a colonial slavish mentality. In Bengal these pioneers, inspired by European literature, soon began to write in their mother tongue and ultimately made the Bengal Renaissance possible.

Tagore came to represent the full flowering of this renaissance. He had also fallen under the spell of European language and literature but did not do as his two illustrious predecessors had done. He had inherited a different tradition. From the very beginning of his literary career he wrote in his mother tongue. In his heart of hearts he was a proud Indian and passionately loved his own culture. In time he came to represent the quintessence of Indian culture like none else. For the same reason he does not appear to have been very enthusiastic about the translation of his works into English. This business of translation was started by his friends and admirers. They also exerted a tremendous pressure on him to undertake the translation himself. Did they do so only to spread their friend’s fame beyond Bengal? It was much more than that. What prompted them was their militant nationalistic zeal. It will be evident if we try to recapture the spirit of the time.

Ever since the assumption of the Indian administration by the British Crown in 1858 day by day the foreign rulers were becoming insufferably arrogant. They treated the natives as inferior and subhuman beings. This feeling of racial superiority reached its highest point at this time. It coincided with the most repressive regime under the virulently xenophobe Viceroy Curzon. Contact with the western civilization had opened the eyes of the English educated middle class Indians. Smarting under the humiliating foreign rule they were becoming inspired by a nationalist spirit. They began to get politically organized and established their first political party in 1885. Initially it was a peaceful organization seeking political change only through constitutional means. As they grew more and more assertive and demanded self-rule they were told that they were not yet fit to rule themselves. To suppress them various measures were taken which culminated in the most repressive 1905 Partition of Bengal. In his Anandamath, published in 1882, Bankim had already shown that nothing short of armed revolt could give us freedom. It took practical shape in the Swadeshi and the terrorist movement that started after this partition. The famous Alipore Bomb Case, referred to earlier, showed how far the middle class could go in taking militant action. Many of the participants went to the gallows. They were inspired, amongst others, by Bankim’s Anandamath and Vande mataram and Tagore’s Gora and swadeshi songs. It was Ramananda who persuaded Tagore to write Gora. The middle class Bengalis were saturated with the spirit of swadeshi. Abanindranath with other Tagore boys accompanied Tagore in the anti-partition street processions. Gaganendranath, who had many friends among the ruling elite including the Lt Governor himself, secretly funded the terrorists and narrowly escaped arrest and prosecution. Though he did not support terrorism Rabindranath gave shelter in his zamindari and Santiniketan School to many who were suspected to have connection with swadeshi and terrorism. In the eyes of the police the poet himself became a chief suspect and sometimes they discreetly raided the Tagore house at Jorasanko and carried on a constant surveillance over Santiniketan. The government also issued a circular prohibiting its servants to admit their children in Tagore’s school.

This suppression of the middleclass was not confined to politics alone. Two of Tagore’s friends were directly affected by such oppressive measures. Ramananda had to leave Allahabad allegedly for publishing what was considered as seditious matters. In Calcutta he was often fined for the same reason. Jagadish Chandra Bose as professor of Physics at the Presidency College became a victim of the worst kind of racial discrimination. He was paid one-third of the salary his European counterparts received. In protest he did not draw his salaries for three long years. He was also not provided with the minimum facilities for carrying on his research works in the college laboratory. He had to face all kinds of bureaucratic obstacles against his academic tours of Europe. To pay the expenses for these tours Tagore had to send money from another friend – the Maharaja of Tripura.  By his many scientific inventions Jagadish Chandra proved that in the field of science the Indians were in no way inferior to the Europeans. He missed the Nobel Prize for physics because he did not care to take patent for his invention of wireless telegraph which he had made before Marconi. It was this militant swadeshi spirit which motivated the poet’s friends to translate his works. They wanted to prove to their rulers that in the field of literature also the Indians were not lagging behind.

After his resistance against translation was at last broken by his tenacious friend Coomerswamy the poet seems to have got over his shyness and after the departure of this friend translated a few more poems most probably to please his friends and admirers. Their number was however negligible and they were not some of his best. None of them found a place in the English Gitanjali either. There is nothing to show that he had any definite programme to undertake large scale translation. Even if he had such a plan in his mind he does not appear to have been in a position to execute it at that time. We have seen what heavy load he had taken on his shoulders when he took up the management of the zamindari. He went on adding to this load, most heavy of which was the school at Santiniketan. Alongside overhauling of the zamindari administration he also started his works on rural reconstruction with a view to improve the lot of the rural population and make them self-reliant. But what were most painful were the series of bereavements he suffered at this time. In 1902 his wife died. The very next year died his daughter Renuka. His father passed away in 1905. His youngest son Shamindranath was his dearest child. This son died in1907. These were more than enough to devastate any man. But what a reserve of spiritual strength Tagore possessed! Nothing could bend or break him. But though his spirit was strong his flesh gave in. Over work for more than a decade took its toll and he fell seriously ill. He was advised a change and good treatment. A voyage to England was planned for this purpose. With his doctor friend Dwijendranath Maitra he was to sail on 19th March, 1912.  But the night before his departure his condition became critical and he had to postpone his journey. Till that date not a single poem for his English Gitanjali had been translated. Had things gone as planned it is doubtful if that book would ever have been written.