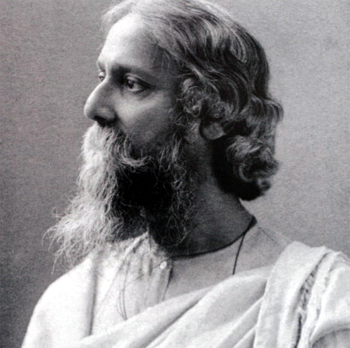 A few English scholars played important role to win the Poet his international accolade, the Nobel Prize. Rothenstein, one of them, was the first to discover the Poet while he had visited the Poet’s ancestral home (toward the end of the first decade of the twentieth century) at Jorasanko (North Calcutta) as a guest of the Poet’s nephew Abanindranath Thakur who was a renowned painter, his fame reaching Europe and, thus, earning high esteem of Rothenstein and of many others. Interestingly, Abanindranath never traveled far and wide, as, it is learnt, he was allergic to travel, and rarely crossed the boundaries of the then undivided Bengal. It is also learnt, it is Abanindranath who was supposed to visit Delhi to meet Rothenstein there but, somehow, the reverse followed. At Jorasanko, Rothenstein did not miss the beaming personality of Rabindranath at a gathering there, and on his enquiry, learnt from Abanindranath that Rabindranath was his uncle and a poet. So, had Abanindranath overcome his lethargy for travel and really visited Delhi to meet Rothenstein there, Rabindranath might not ever have been a Nobel Laureate and would remain a lesser local celebrity of Bengal. Another mishap was, when Rabindranath went over to London at the invitation of Rothenstein, he lost his manuscript of Gitanjali (see next paragraph) in a London underground tube which, of course, he got back courtesy British Railway else this trifle slip would have been enough to deprive him of this international accolade.

It is a shame that until the Nobel was conferred on the Poet many leading academicians of that time at home would not recognize this rare genius in human history. However, it is his own translation of a number of poems, which he had translated in Santiniketan to compile in a book titled “Gitanjali” (Offering of Songs) which were eventually read (on the 30th June 1912, it is said) in a gathering of a good number if top litterateurs of England of that time, that had paved his way for the Nobel. The Poet’s own description of that evening in London, as he had narrated to Maitrayee Devi in Mangpu (near Darjeeling), while he was her guest there shortly before his death (in 1941), may be found interesting by the readers. The following are the quotes from Maitrayee Devi’s book “Tagore By Fireside”, a translation by herself of her original Bengali book “Mangpute Rabindranath” (Rabindranath at Mangpu). Thus how the Poet had narrated that evening in London –

“When I first started translating them into English, I never thought they would be readable. Many have insinuated that Andrews was doing it for me. Poor Andrews felt sorry and ashamed. When Yeats arranged a meeting of distinguished people at Rothenstein’s house, I cannot tell you how embarrassed I felt. Yeats would not listen to me. He was undaunted . A galaxy of big people came. Gitanjali was read. They never said a word. They listened in silence and in silence they left – no criticism, no approbation, no favourable remark, no encouraging comment. Blushing in shame and disgrace, I wished the earth would have opened and swallowed me. Why did I ever listen to Yeats? How could I write English, had I ever learnt it? I was filled with remorse. I could not raise my head. Next day letters started coming, they flooded in, overflowing with enthusiasm. Everyone wrote. Then I realized they were so moved that evening that they dared not talk. English people are reserved, it is their nature. It was not possible for them to express their feeling at once. What a surprise it was, unexpected and unimaginable. Friend Yeats was pleased.”

How the Poet reacted when the Nobel had finally come through? Well, he said that it (the Nobel) was like a tin can tied up to the tail of a dog (the urchins’ favourite game) who can no more move around without making noise. The flip effect of Nobel was the award money eased out the financial stress of Viswa-Bharati and soon put the institution on the international map to its great advantages, which the Poet acknowledged, though at the cost of its earlier solitude and peace. (Refer poem “Asha”)

Adopted from the book of Tagore translation by Rajat Das Gupta “The Eclipsed Sun” – published in January 2002.