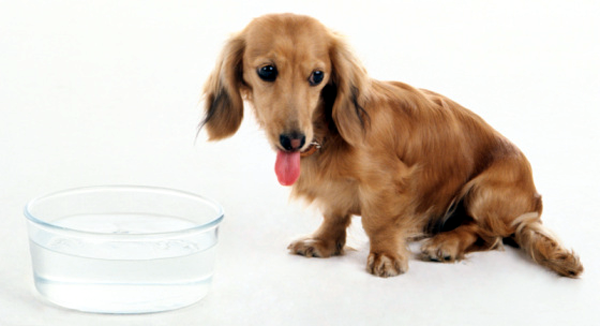 Often dog owners complain that my dog does not drink water at all! Some have a problem that their two months old puppy does not even lick the water in the bowl. All such complaints are true. But most of us never try to analyze why doesn’t the dog drink water?

All of us know that a dog is a mammal and a warm blooded animal. Like all other mammals (including us) dogs too need water to survive. Without water to drink we can at best survive for seven days. Likewise dogs too are prone to dehydration and will certainly die if they don’t get water to drink. ‘This is intriguing’, you must be thinking, because your pup or dog doesn’t seem to drink water!

While a mother raises an infant or a toddler she feeds him water from his bottle or a sipper. Baby gets the amount of water required from time to time. Plus unlike dogs, a human baby grows on liquid diet for a longer period. He gets his supply of water from the milk. Poor dog has a shorter span of life and he has to grow faster than a human baby. Thus his diet begins to get solid even by the time he is eight week old. Therefore, a puppy less than eight weeks old may not lap water because he is mostly on a liquid diet (milk). But as the pup reaches around eight weeks and his diet gradually becomes more solid and crunchy he needs water to drink.

Unlike a human baby, a pup reared by the humans is not under constant observation. He is certainly offered water in a bowl, but it may not be fresh water. It may be an hour to even several hours old. Dogs eat or drink after sniffing what is offered to them or what they can manage to get. The stale water in his bowl catches dust and for his extra sensitive nose the smell changes. The puppy refuses to drink such water. The same logic applies for the adult dogs as well.

Such dogs, on the other hand may sneak out and lap water from the toilet, bidet, or from under the sink or even the bucket of water kept in the bath.

But then you might argue that water from some such places can be terribly dirty, why do they lap it eagerly? Yes your observation is absolutely correct. But as said earlier in the matter of what they eat or drink, dogs are guided by the smell. The smell of the water in the loo might be obnoxious to you, but for a carrion eater dog, it is ‘yummy’. Yet another reason for your dog lapping water from unwanted places could be the temperature of water. Domestic dogs get finicky over the temperature of water. Some won’t even sniff at the bowl, unless it contains a few ice cubes, while others would love water at room temperature. Some prefer to lap running water from a tap while others love to drink water straight from the hose pipe.

However, I am a strong believer and practitioner of the fact that dogs can be taught to do anything. Therefore like many other things I ‘teach’ my dogs to lap water from a particular bowl only. If there are more than one dogs each one laps from his/her own bowl.

But then some people complain that they keep on filling the bowl with fresh water and their dog comes and instead of drinking water he splashes water over his body, wets his paws in the water in his bowl, but he prefers to drink from the bucket only. There are only two ways out for such a situation, either you place a bucket of water for your dog to drink, instead of a conventional bowl, or you teach him to lap from his bowl only, without splashing water.

I have often repeated that dogs are creatures of routine and learn by association of ideas. To make him learn to lap from his bowl only, you have to invest in a bowl with a stand on which the height of the bowl can be adjusted. This has a purpose behind it. Firstly, it saves the dog to bend and reach the ground level to lap-a posture which can ruin the shoulders of your dog. Secondly he never gets tempted to splash that water on him or dip his paws in that.

To begin with after the pup or an adult had a bout of play/walk/exercise, confine him in his Pen. Keep the water bowl outside-out of his reach, but within his sight. He will certainly begin to indicate his need to drink water and naturally he would be panting a lot. Take him to the bowl on a leash, especially if he is an adult or a perky pet. Make him Stay on command (I am afraid you have to read my earlier blogs to learn that, if you are a new reader!) and then make him drink after a count of ten. Once he is finished, praise him a lot and again put him back in his Pen. It is quite likely that he may go for another round of drinking after a few minutes. Repeat the procedure. Within two three repetitions you will notice that your dog learns to lap water properly, without spilling and splashing.

Once you are confident that your pooch has learnt how to drink water properly and that too from his bowl only, you need not confine him after walks or a bout of play. Let him have an easy access to his bowl of fresh water all the time. Keep changing water in his bowl at regular intervals daily.