Her Rapists and the Death Penalty

A trial of six Indian men accused of the rape and death of a young girl is underway in New Delhi in a specially created fast-trek court.  The girl’s name has not been released.  Many ask that the accusers be sentenced to death and executed immediately thereafter either by hanging, electric shock, or lethal injection. 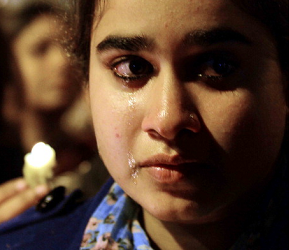 The reason:The woman’s parents have paid the ultimate price - no loss is greater than that of a daughter killed in a barbaric way - and now they and her loved ones need their grief to subside, their hurt to heal, and a sense of closure.

If the murderers are kept alive, then someday they may appear before the media with their lawyers or their families, demanding a lesser sentence or an early parole or both; someday they may escape from a jail and rape someone else; someday they may kill someone in a prison; someday a president may pardon them.  If any of these events were to occur, the family’s sorrow from bereavement and pain from miscarriage of justice would never end.

Therefore, since we know beyond the shadow of a doubt that the rapists are guilty as charged, then why not let them die?  Capital punishment in this instance makes sense.  We are not taking their lives for the sake of revenge; we are doing it to deter other would-be criminals from committing such crimes and thereby saving future casualties.  Furthermore, why should our government spend money on these criminals for as long as they live for food, clothes, medical needs, and security?  Money thus saved could be used for women’s causes.

There are people in our nation who do not hesitate to abort a baby girl, yet they are hesitant to put a killer to death.  In the land of Mahatma Gandhi, yes, it is hard to take anyone’s life including the killers’.  But then again, it is equally hard to forgive the guilty while watching the innocent suffer.

The lawyers of the defendants may argue that police made errors in collecting evidence or that their clients have a low IQ or are insane or are mentally incompetent and did not know what they were doing.  It may be so.  But by saving the rapists’ lives, are we saying that their lives are more sacred and inviolable than the young woman’s life they took?

She was a student.  She’ll be absent, ever.

Image of a protestors breaks down during the protest rally in New Delhi.
Image (c) Gettyimages.com