and the Journey to the East 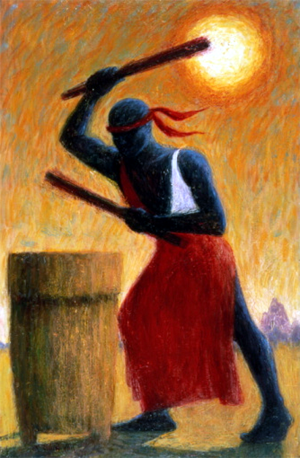 Man has been meditating or engaging in other consciousness altering processes since his very early dawn. The search for supra-sensory experiences seems to be as old as man and the drive that motivates it one of his innate drives. How else do we explain the fact that consciousness altering processes are part of not only every religion and cult, but also of every tribe, however primitive it is? A majority of the thousands of tribal rituals and dance forms spread across the world have the capacity to alter consciousness through their rhythmic, repetitive movements, the chants and songs that accompany them and the regular beats of drums that form their background.

Surprisingly, these journeys into the inner world of man are not an exclusive adventure of the peace-loving tribes. They are as widely engaged in by violent tribes as by gentle ones. Several of the headhunting North American tribes, for instance, had immensely powerful meditation practices. The Sieux Indians had, and still have wherever they survive in small communities, what is known as sweat lodges. These are circular huts about five feet in diameter and some three or four feet high, made of reeds and willows, over which are draped animal hides, canvas and blankets to make the hut completely dark and airtight. Usually some four to eight people enter the hut and sit naked on the floor around a shallow pit dug in the middle. After filling the pit with red-hot rocks, the hut is sealed from outside. Accompanied by prayers led by the chief of the group, the medicine man, a sacred pipe is passed round which all participants smoke by turns. When this ritual is over, the chief begins chanting sacred mantras of the community.

At the end of the chanting, the chief sprinkles water on the red-hot stones. There is an explosive hiss as water hits the stones and intense heat fills the hut. The wave of heat hits the body like a physical blow. As soon as the explosion is over, more water is sprinkled, invoking another explosion like a whiplash in the choking darkness of the hut. When the intense heat becomes unbearable, a shouting by the chief signals the attendants outside to open the coverings of the hut and let wind in to cool the meditators. After a brief relief, the sealing is put back in place. The process of praying, smoking, chanting and the whiplash of heat waves continues until the participants pass into powerful trances, which usually happens within four or five cycles.

It has been observed that under these trances, men are able to transcend pain. For example, pierced by a needle they do not feel any pain. Live coals do not burn them.

The experience of the sweat lodge is usually life-altering. No one who has undergone the trance emerges from it unchanged. Conquest of fear is one of its outcomes, apart from visions of the nature yogis experience during intense meditation.

How similar to our own practices spread across the country during which men and women pierce their cheeks with lances or otherwise torture themselves, with no apparent pain or lasting harm to themselves, while engaged in chanting, dancing to rhythmic drumbeats and other consciousness-altering rituals!

In the west, though, it was only very recently that these areas of human experience have been subjected to systematic study. Though people like Mesmer did discover the unusual powers of the mind, it was in the 1960s that a systematic, thorough investigation of consciousness on fully scientific lines began there. And in that, too, at least part of the credit belongs to an Indian - Maharshi Mahesh Yogi.

In the 1960s there was a big craze for peak states all over the western world. And as the craze reached its crest, people started looking for tools to take them to these states without drugs, which were the most common method in use in those days to attain highs. It was then that the Beatles discovered Mahesh Yogi and Transcendental Meditation. TM, as transcendental meditation is popularly known, became an immediate hit among the young generation in search of altered states of consciousness.

The western scientific world was now keen to investigate and understand what exactly happened during TM, and other meditation traditions like Zen, which were also gaining popularity and serious interest. It was already known that the brain continuously produces electricity as it functions and the cumulative electricity produced by billions of cells move in wave forms. Electroencephalograph [EEG] studies of the brains of meditators showed that as people entered meditative states, their brains slowed down from the restless beta state in which brain waves move at speeds between 14 and around 100 cycles per second, to the alpha state in which brain waves move at speeds between just thirteen and eight cycles per second! This was an interesting discovery and spurted further research into the brains of meditators.

Researchers Alyce and Elmer Green of the Menninger Foundation soon made a surprising discovery. Not only did meditators enter the alpha state, some of the more experienced ones went on to a still calmer state, the theta state, in which the brain waves slowed to an unbelievably slow frequency - to just between four and seven cycles per second!

This was truly an altered state of mind. Subjects in this state recalled long forgotten memories - and the recalling was not like recalling at all, but more like a re-experiencing, a reliving - so vivid were the experiences. The Greens also noticed that people who regularly experienced the theta state grew in creativity and developed a sense of psychological well-being. And it did not stop at that - they became more adventurous in life, more risk-taking, more stable and were psychologically healthier, had more social poise, were less rigid and conforming and were more self-accepting.

Further studies by the Greens and others found that the theta state was very much like the hypnotic trance, in which people show astonishing powers. In this twilight state they were able to learn enormous amounts of material very fast and with great precision - it was the super-learning state.

As the studies progressed, researchers found that people can move even beyond theta into what is known as the delta state, a state of very profound meditation, close to what Patanjali and other ancient yogis call samadhi. In delta, people moved beyond the ego into a state of universal awareness, into the state of the awakened mind. As one of the researchers puts it, "Experiences in this state are many times more ineffable and cannot be explained or described in words. Experiences in this realm are more than passive diversions. Their creative power can change the very nature of the participants' reality."

Today we know that meditation has the power to change our activities from the restless and aggressive left brain to a more relaxed and tranquil right brain, from the sun brain to the moon brain, that meditation can form new neuronal pathways in the brain, helping us not only see things in different and clearer ways, but change the very nature of our perception, changing it from what is now like mono-vision to stereovision.

Neurobiology, the science that studies the brain and the nervous system, tells us today that meditation has a profound impact on our neocortex, the thinking, calculating, logical brain. It also tells us that meditation can stabilize our limbic brain, the brain in which, among other things, our emotional centers are situated. Not only that, the effect of meditation reaches our core brain, the reptilian brain, which control most of our vital functions. The effect is that we achieve greater strength and orderliness in brain functioning, greater efficiency in the functioning of all our physiological systems.

The Buddha once counted one hundred and one benefits of meditation. What the neurosciences do today seems to be very close to what the Buddha did. According to them, meditation causes dramatic increases in the production of a whole variety of beneficial brain chemicals, including pleasure-causing endorphins - as well as a number of others proven to slow aging and increase longevity and well-being. It removes dysfunctional mental and emotional patterns such as anger, fear, anxiety, sadness, substance abuse, self-limitations, etc. - even of those that have stubbornly resisted other methods. Hostility levels, rigidity, anxiety and depression are reduced and our sensitivity, sociability, tolerance, capacity to initiate contact, inner control and so on enhanced, resulting in improved self-image and better interpersonal relations.

The neurosciences tell us that meditation removes our emotional and energy blocks, combats energy drain and fatigue, increases energy levels, drive, self-control, self-assurance, and the sense of power; that it enhances emotional stability and spontaneity. It makes whole brain synchrony possible - we achieve synchrony of the two hemispheres of the brain, which in turn helps us deal more effectively with the people we come into contact with, situations we face and problems that challenge us. Our learning ability increases, creativity goes way up, intuition increases, focus and concentration increase and personal self-awareness increases dramatically.

Among powers increased by meditation are intelligence, imagination, creativity and problem solving skills, alertness, orderliness in thinking, adaptability, perceptual ability, perceptual-motor performance, stability, attention, memory, etc. Meditation also reduces stress levels and increases our ability to deal calmly and clearly with all life situations. We become more relaxed, less anxious, more centered, more peaceful, and more connected to others. A variety of stress-related problems such as headaches, depression, diminished drive, constant debilitation, the sense of alienation and isolation, and psychosomatic illnesses such as anxiety, insomnia, neurosis, etc. are healed. Dependence on drugs, alcohol, smoking, and so on is reduced.

The neurosciences have just begun to discover the powers of the supra-conscious level of our mind and consciousness. And they have already begun to suspect that perhaps this is the seat of the psychic powers such as telepathy, telekinesis, etc. We should not be surprised if one day soon they echo Patanjali and other yogis of the past and say that the path of meditation leads to the awakening of the siddhis listed in the Yogasutras, like anima, mahima, prapti, pragamya, ishitva, vashitva, and so on.

And even that will not be the end of the journey, say our ancient masters of yoga.

The journey to the east was once a pilgrimage undertaken by man all over the earth and later abandoned in many parts of the world, particularly in the west. With modern neurobiology showing the light, perhaps man will once again embark on this pilgrimage on man's oldest journey, on his greatest adventure - The adventure of consciousness.  Which India never gave up, though we too have had our own periods of intensity and indolence, of ardor and languidness, periods when we walked with great passion and others when we preferred to be languorous, or even just tarry on the wayside.