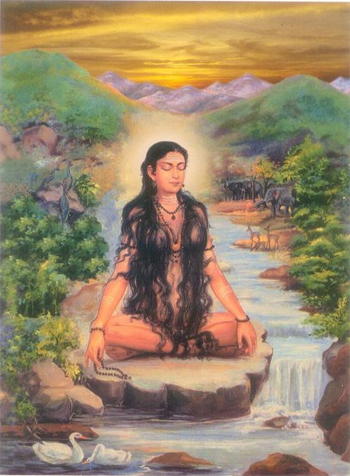 When scantily clad women of the 21st century are frowned upon, she dared to go around naked in the 12th century!!  Who was this dauntless woman? This was the young, defiant, vibrant, one and only “Akka” - respected elder sister of the world – Akka Mahadevi of Karnataka.

She was liberated by her unstinting devotion to and love for her Cenna Mallikarjuna, Lord white as jasmine, Lord Shiva. Staying nude was a common practice among male ascetics in those days, but for a woman it was considered nothing less than sacrilegious and shameless. Legend has it though, that her nudity was totally protected by her beautiful, long hair. Her statue too, installed in her birthplace, stands thus today.

People,
male and female,
blush when a cloth covering their shame
comes loose
When the lord of lives
lives drowned without a face
in the world, how can you be modest?
When all the world is the eye of the lord,
looking everywhere, what can you
cover and conceal?

Akka Mahadevi lived during the 1100s in Karnataka, a region on the southwest coast of India. She was born in Udatadi of Banavasi, in a pious Shaiva family. According to Shaiva literature her parents were Nirmala and Sumati, themselves steadfast devotees of Lord Shiva.

That was the time of liberal Veera Shaivism, a reform movement. Its leaders - political and spiritual radicals ¬¬  aimed at direct communion with the divine, rather than through meddlesome mediators. The satsangs of the Veera Shaivites had no room for the caste system. At their gatherings all were required to work, eat, study and practice together. Rituals were reduced to the barest minimum. Their community thrived outside of society and developed a strong spirituality alive till today. Outstandingly, in their households, daughters were taught to read and write and were allowed to study scriptures, putting them on par with the men in these respects. Theirs was a direct spiritual and political rebellion against the orthodoxy and religious sway of the Brahmin priests.

Akkadevi grew up under this progressive influence, with the framework of Shaivism as her paradigm. Little is known about her childhood, except that she studied under Shivagamacharya and started writing vachanas from a very early age. She is said to have written about 350 extant free verse lyrics in the Kannada language, known as vachanas (literally, "sayings"), in praise of the Lord, whom she had accepted as her mystical husband and lover. Like that of other bhakti saints, the imagery of her verses too is based in the everyday, familiar language of ordinary people.

She had wanted to remain an unmarried devotee of Shiva, but her family forced her to marry the ruler of her land, King Kaushik, who having fallen in love with her beauty, sent her a proposal and threatened her family when she rejected him. But she still kept him at a distance asserting that Shiva, was her only lover and husband.

"Listen, oh, Mother! I love Him,
He is the one, the only one.
He knows no birth and death.
He is unchained by caste or clime.
He is boundless, changeless, formless;
He is beautiful beyond comparison,
All others fade away and die at last.
I will have none of them.
My Lord shall forever be

One day, when the constrictions of household life became too claustrophobic, she ran away rather dramatically from her husband’s house. With the rejection of family life and worldly belongings, she shed her clothes too as a symbol of her asceticism. She roamed free throughout South India, singing her songs and worshipping her Lord, eating and sleeping as and when the mercy of strangers permitted it. Her act was considered a defiance of the varnashrama dharma which suppressed the shudras and women. She proved that a woman has every right and has all the means to pursue a life exclusively engaged in the exploration of the divine. She is even believed to be a major figure in the social empowerment of women. one of the first feminists and to date she inspires those fighting for women’s emancipation.

Other men are thorn
under the smooth leaf.
I cannot touch them,
go near them, nor trust them,
nor speak to them confidences.

Mother,
because they all have thorns
in their chests,
I cannot take
any man in my arms but my lord

I love the Handsome One:
he has no death
decay or form
no place or side
no end nor birthmarks.
I love him O mother. Listen.

I love the Beautiful One
with no bond nor fear
no clan no land
no landmarks
for his beauty.

So my lord, white as jasmine, is my husband.

Later she wished  to join a community of Veerashaivas (a new and radically democratic group of Shiva devotees), and many of her poems are from the report of her successful attempt to prove to the male Veerashaiva leaders gathered in the city of Kalyan that she was worthy to be part of their community.

Why do I need this dummy
of a dying world?
illusion's chamberpot,
hasty passions' whorehouse,
this crackpot
and leaky basement?

Finger may squeeze the fig
to feel it, yet not choose
to eat it.

Take me, flaws and all,
O lord

At the ashram here she met the famous Veera Shaivite Guru, Basava. He doubted her sincerity as a serious spiritual seeker. Her nudity covered by her hair was questionable to him, but when she argued that she did it to spare him embarrassment, he recognized her genius and she entered his ashram as his disciple.

“It’s only when the fruit is ripe within
That the outside doth lose colour.
If I covered the symbol of sex,
It’s lest it hurt your eyes.
Why does it needle you, O Brothers?
Spare this poor maid
Who has surrendered herself to Cenna Mallikarjuna.”

"Seeing the feet of the master,

O lord white as jasmine,
I was made
worthwhile."

She is believed to have died in her 20s, supposedly disappearing in the banana groves at Shreeshaila, in Andhra Pradesh while in ecstasy entering mahasamadhi (divine union) with a flash of light. This merging of hers into her Lord white as jasmine is thus described by Vasanti Mataji -

“The bee that was engaged all along in drinking the nectar from the white jasmine is consumed totally in that very process. Not even the Symbol remained”

Some more of her beautifully enlightening vachanas, below.

Like a silkworm weaving
her house with love
from her marrow,
and dying
in her body's threads
winding tight, round
and round,
I burn
desiring what the heart desires.
Cut through, O lord,
my heart's greed,
and show me
your way out,
O lord white as jasmine

*Like treasure hid in the ground, like flavour in the fruit, like gold in the rock and oil in the seed, the Absolute is hidden in the heart.

Don’t despise me as
She who has no one.
I’m not one to be afraid,
whatever you do.
I exist chewing dry leaves,

My life resting on a knife edge.
If you must torment me,
Chennamallikarjuna,
My life, my body
I’ll offer to you, and be cleansed

“I am without pride of caste
Without pride of resolute will am I.
I have cast away the arrogance of riches,
Of the pride of learning also I have none.
No manners of pride dare some near me,
For Thou hast blest me with Thy Grace.”

“Akkamahadevi is an archetype. She represents the search for happiness, fulfillment and purpose familiar to us all. She struggled with her body, her personhood, her feelings and thoughts, her love of God, and her desire to be free of social and family obligations”.  – Ma Devi Saraswati

Previous: Lal Ded: The Yogini
Next: Muktabai of Maharashtra