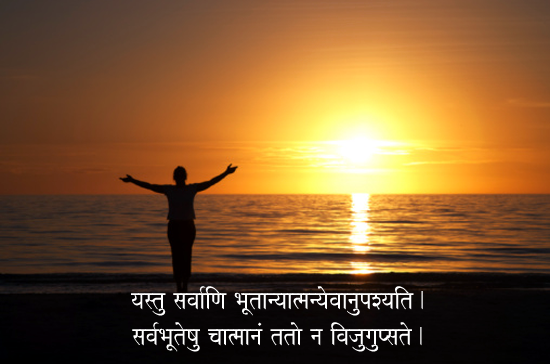 Effulgence of the Infinite Consciousness
Shines bright and pervades everywhere;
Be That;
Realise the Self by the Self in the Self.
Duality and hatred vanish away as horn of a hare.

Vedanta says that there exists only one Cosmic Consciousness. In reality, neither the objective universe nor the perceiving self, nor perception as such nor void nor inertness exists. The one Consciousness that exists is called Infinite Self. It conceives within itself the duality of oneself and the other. The qualities and the nature of the created and the potentiality of the creation are inherent in the creator. Even the mind has no independent existence apart from the creator. Self is self-luminous It shines all the time revealing its presence. It reveals everything else, It itself is not revealed by anything. It is the Self that reveals the body and the mind, the senses and the world. The Infinite or Pure consciousness has never been born and undergoes no change. Brahman alone is absolutely Real. This world is an illusionary appearance and the individual soul is in essence nothing other than Brahman. The shloka says that we should constantly see everywhere the existence of God and see the Self in all beings as there is no duality and only God exists everywhere and there exists nothing else but God. A wise man perceives all beings as his ownself and his self in all beings.

It is the consciousness that exists in all substances, as the essence exists in all things, oil exists in sesames seeds, an aroma exist in flowers, and the faculty of objective perception exists in the perceiver. It is the essence of the world appearance. It is the greatest of our action and cause of all causes and essence in all beings. Brahman alone is absolutely real; this world is merely an illusionary appearance. The individual soul in essence is none other than Brahman.

The seer says that we should contemplate on the Lord in this spirit. He is the light illuminating the solar power as well as the lunar force. He is the intelligence hidden in all material substances. He is the extravert awareness as well as the introvert prana, the life force. He is without parts and is the all; having no physical body yet dwells in the body, enjoys and does not enjoy. One should consider this and take up everything as good and fine, accept that all is well with the world as God is. One should abandon all divisive notions of this and that and realise that all is Brahman. We have to worship the Self in this way and realise the Self by the Self in the Self.

Everything has one of the three qualities - Sattva, Rajas or Tamas. It may be auspicious, good and mixed. We have to realise everything in our own self and worship or meditate upon the Self in this spirit. We have to look things with equal vision, even the pleasant and the unpleasant, beautiful and ugly, gentle and wicked. There is no duality. We have to understand that darkness means absence of light and not the negation; ignorance is absence of knowledge and nothing else.  All this is Brahman and all emanates from Brahman. Leaving all distinctions between desirable and undesirable, we should worship the Self. Self is not revealed by scriptures or instructions of preceptors but by spiritual understanding. They do guide but it is one’s own self enquiry that counts. Vivekananda says, “The Self of a man, the Atman, higher than the sun and the moon, higher than the heavens, greater than the great universe itself, this glory of the Self appears as a man, the only God that ever was, the only God that ever existed and ever will exist with wisdom, sacrifice and renunciation.” We have to concentrate upon this Self.

The seer knows that for an exalted soul, all sentient beings are one in relation to Pure Awareness. Everything is a part of the same one whole. There is no misery or grief and any feeling of duality. There is a very significant Christian saying, “Love Thy neighbour as you love yourself.”  Even this lags perfection. It accepts two different identities – you and your neighbour, independent of each other though mutually allied. This is not the Monism of Vedas.

Brharadanyaka Upanishad 4-5-15 says, “Where there is duality, there one perceives another, smells another, one tastes another, one contacts another, knows another but when all this is Atman, who is there to think, touch know whom? Who can know Him by whom all this is known? –Who can know the knower?” There is no sense of duality as God alone exists and none else. Non-duality excludes all plurality and therefore all proximity in space, all succession in time, all interdependence as cause and effect, and all options as subject and object do not appear at all. Paul Deussen raises his doubts. He says, “The gospels fix correctly as the highest law of morality. Love your neighbour as you love yourself. But why should I do so, since by the order of nature I feel pleasure and pain only in myself, not in my neighbour?”