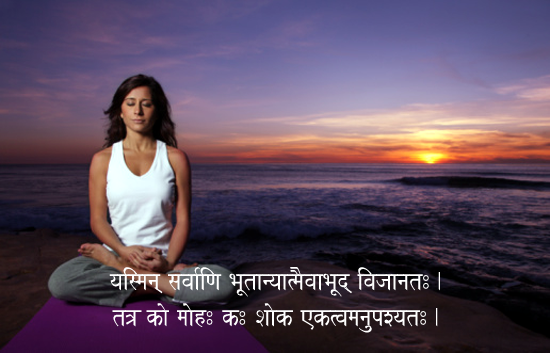 When “That I am” is known,
Bliss is attained;
Ignorance and delusion lose meaning.
The seer of oneness receives no negative feelings;
neither passion nor grief touches him.

We all know that self is self–luminous. It shines all the times and reveals its presence everywhere. It is Swayam Prakash. It reveals everything else but is not revealed by anything. Self is Eternal light. It reveals the world, the body, the senses and the mind. Even in deep sleep state when all these are absent, self is still there. It has been known that ignorance of self is the cause of sorrow and knowledge of Self leads to delight and tranquillity. So one should engage oneself in the thought of the Self and set himself established in Pure Consciousness in regard to all the precepts whether they be pleasant or unpleasant. For this we have to abandon all notions of this I am, that you are, and realize that all indeed is Brahman.

Everything of the Infinite Consciousness itself is space, time, natural order, I-ness, thought and its expansion, I, You and the otherness, above and below directions, stars and mountains, ignorance and knowledge, darkness and light, whatever is, was and will be, - all such eyes are His energies. It is one though conceived as diverse. It is neither one nor many but exists in Reality. It is of the nature of Supreme, Blissful and immeasurable great cosmic Being of Consciousness.

When the Self is sought in this manner, the state of equanimity like that of the space is gained and the mind becomes completely quiescent, without any least movement of thought. This is the state of equanimity in which one gets established. The inner self is extended within himself. There remains no likes and dislikes; pain and pleasure, attraction and aversion. When the mind is at peace and the heart leaps to the Supreme Truth, then all the disturbing thought waves in the mind–stuff subside. Then an unbroken flow of peace and the greatest Bliss is the result. For him this very world becomes abode of God. He knows that the ignorant live in the mind and the enlightened ones live in Sattva. He is the possessor of unending joy, happiness and Supreme Bliss.

Such a man established in the Self becomes Mahakarta, (the great doer of action); Mahabhokta (The great enjoyer) and Mahatyagi (The great renouncer) He has no doubts, and performs proper acts and is always selfless in nature. He does not hate anybody, enjoys all natural experiences, sweet or sour, and entertains no desires. He is by nature non-violent and unaffected by pleasures and pains; such a one is banished from any mental concept, like Dharma and Artha, religious commitments and monetary pursuits, birth and death. All desires and doubts; bodily attractions and attachments, pain and sufferings are naught to him as he knows that the notion of world appearance is false.