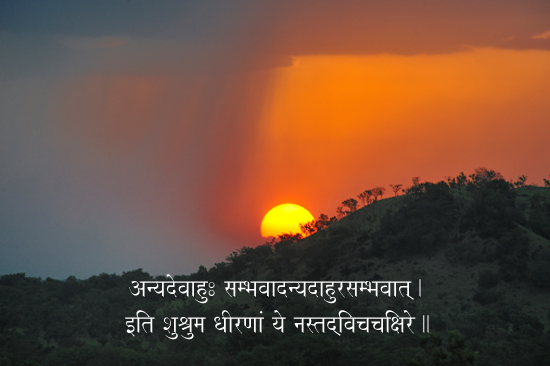 Sambhoot and Asambhoot;
each of these paths bring some positive results
based on their limited and discriminatory view on
Reality and Spiritual endeavour.
It has been so said and heard
from the undisturbed authors who clearly explained it.

The verse explains the experience of learned people in the light of their experiences. They put forward the advantages of these two paths but clearly point out their limitations also.

An average man takes recourse to the path of Asambhoot, only some take to Sambhoot. Sambhoot can mean the worship of the Impersonal God; the Nirguna; the one without any attribute. Asambhoot may be treated as the path leading to a personal God or god with attributes, a Sagun god of one’s choice, an ishta deva. The first is mostly attained through Path of Knowledge or Jnan marg and the second through Path of devotion, Bhakti Marg.

In Sagun or Asambhoot, we worship such a Lord as omnipresent , omnipotent and omniscient through our actions, by our speech, body and mind. The emphasis is not on the Absolute Brahman where complete and total perfection does not admit of any change and ever remains without any attribute. It is a personal form of God easy to comprehend and negotiate.

Path of Devotion or Bhakti marg is a presumption of duality of the worshipper and the worshipped, lover and the beloved; whereas Jnan marg is a lamp post for monism; non-duality. In the worship of the manifest Sagun, the devotee takes support of all the three organs – body, speech and mind. In pooja, it is the body and the speech; in Japa, it is also the mental contemplation. These three serve as means and not as the goal. In Sagun, worship with attributes, the Lord too has eight fold form — space, air, water, earth, fire (5 elements) plus moon (Representing planets) the sun (representing stars and constellation) and the Jeeva (the experience of the universe representing all human life).

Sagun or worshipper of the unmanifest goes a long way. He even treats the deity like a normal being for his own end-purpose even though as an incarnation of God, He is believed to mitigate the problems of all human kind. The deity is so worshipped as He attains divinity like Agni and Vayu. His Asthan becomes personified as a spirit of divine worshipped as in  the case of birth place of Rama lalla or Lord Rama as a child.

Such a person devoted exclusively to the worship of the manifest does not get at the Reality as he ignores the challenges of the creation and becomes bound in formalities. They do have some significance but do not take us to Self-perfection. Truth which is one with the universal being, must essentially be human, otherwise whatever we realise as Truth can never be Truth in reality. Life is a challenge; one has to meet it; life is a dream; one has to realise it, life is a gallery of love and devotion, one has to enjoy it with surrender. The goal of human life is both material prosperity and spiritual perfection of individual. In the pursuit of abhyudaya (This world) and nishreyas (other world), the individual has to act accordingly. The individuality is not exclusive but inclusive. One cannot advance either materially or evolve spiritually in isolation. One has to seek growth opportunity towards perfection under such conditions. The synthesis of both Sambhoot and Asambhoot is needed for the purpose.

The verse points out that there is no level of Reality. There are only levels of experiences for the individual but no level for the Reality. Reality is ever one and the same. Spiritual self is innate in human body there is divinity in every one.  He has simply to realise it. There are two dimensions to Brahman – (1) the pure unmanifest aspect that is difficult to be conceived by human intellect and (2) the manifested aspect which expresses itself in His myriad glories in the world of His creation.

This is unique in context with the Vedic philosophy of freedom of choice of worship to individuals. Infinite Brahman or Sambhoot manifests itself in various ways and all paths ultimately lead to Him. It has its own advantages but these advantages do not guarantee perfect Bliss and realisation of the Supreme Conscious being. Tulsidas says, “Hermits, ascetics, celibates, all are lost seeking Him in endless guise. Seer’s sages perfectly parrot the scriptures and holy books, blinded by knowledge. Their pilgrimage, fasting, striving, but deludes. Despite their perfect practice, they discover no destination” He only means to say that all teachings trapped in tradition know only the mirage in the mirror. Only the saints who know the body-heart can attain the ultimate.

Our spiritual endeavour is not however aimed at our personal solution. We have to share  our experiences with others and cooperate with them. we have to inspire fellow beings to follow the path leading to spirituality  and enlightenment. we have to instil the confidence in others that liberation can be had here and now. It is not that one has to quit the world and escape or abnegate and return to the wilderness of ascetic life to ascend to heaven alone through path of negation, nivritti or abnegation. Liberation is to be had on this earth, in the very creation of God and instantly by creating heaven on earth through expansion of soul for wider humanitarian cause as of paramount significance. This is the way the seed fructifies into a tree. Let the soul expand and seek oneness with the creation.

This is called the real spirit of Sambhoot, the Unmanifest. Even as the taste of juice of sugarcane cultivated in a thousand different farms and by a hoard of different type of farmers, remains the same and unchanged, let our soul expand that way. Happiness is our nature and joy is our goal of life. The essence of things is more paramount than its material appearance and embodiment.  Let our soul expand and enjoy essence directly and know that “which enjoys the honey (rasa) from the flowers of the senses is the Self”. Even as the consciousness indwelling  all beings is the same –the consciousness that “I am That” be larger than the universe, subtler than the minutest atomic particle and therefore the invisible one. The soul is unmanifest, incomprehensible and immutable The path of the unmanifest is very difficult for embodied souls to realise by effort at meditation but God comes to their help as they believe in surrender and have full faith in God and in love for His creation. Such a devotee lives in the world but does not belong to the world; he lives in the world but lets  not the world live within him. He knows that the world is a dream, beautiful, charming and alluring and so remains wakeful all along. He understands that all embodied beings emanate from the unmanifest  i.e. Brahman’ subtle body, at the coming of the cosmic day and at the cosmic nightfall, they merge into the same subtle body of Brahman, known as the unmanifest.