Splendor of the Spectacle 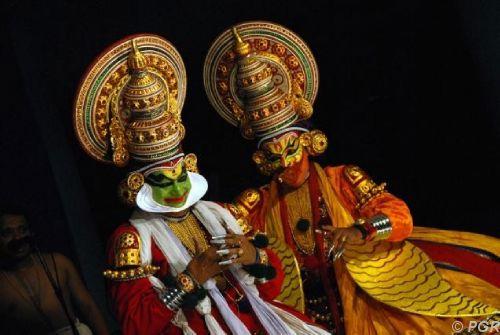 Kathakali, the classical art form of Kerala is a spectacular blend of dance, drama, mime and song and is over 300 years old. One can debate whether Kathakali is a stylized dance-drama or a pantomime or a classical ballet.  Rabindranath Tagore was deeply impressed by the aesthetic range and the narrative techniques of Kathakali when Kalamandalam presented a program in Santiniketan. The great poet ranked it as the epitome of  performing arts in India and included Kathakali in the curriculum of Viswabharati.

Kalamandalam Gopi-Scenes from the Kathakali "Subhadraharanam"
(The Theft of Subhadra)

Kathakali was born only in the 17th century.  But in less than four centuries it grew up to represent as India's most trumpeted cultural heritage in all cultural arena abroad. Kathakali took its shape as it is today by the amazing amalgamation of four different dances.

It cannot also be denied that the divine martial art 'Kalarippayattu" and Malabar "Theyyam" (the most outstanding ritualistic dance form of North Kerala. The bizarre head dresses, costumes and body painting and trance like performances are simply spectacular) have played important roles in shaping the costumes and rigorous training requirements of Kathakali.

Kerala Kalamandalam, the world renowned institution founded in 1930 by the great Malayalam poet Vallathol Narayan Menon and Mukunda Raja, located at Cheruthuruthy in Trichur district, gives intensive training in Kathakali to young aspirants.  In Kalamandalam, Kathakali students are trained in such a way as to master the techniques first. Character-analysis and emotional identification are encouraged to be  undertaken during successive stages of study according to individual preferences and leaving sufficient room for improvisation within the classical frame work.

A complete art, Kathakali perfectly synchronizes on stage Nritta (pure dance),  Nritya (ex-pressional dance), Naatya (histrionics), Geeta (vocal music) and  Vaadya (percussion ensemble). It is a pantomime in which the performing artiste does not sing or speak. Kathakali characters communicate through the language of hand-gestures (over six hundred gestures are in use), body movements and facial expressions. Music is an essential ingredient of Kathakali and the Bhagavathar or the singer plays a key role in the staging of the art form. Kathakali is usually presented at dusk in the premises of temples, sometimes continuously for ten days, each night featuring an act of the play and lasting till day break. Kelikottu, an orchestration, announces the performance.

The lighting of a huge Nilavilakku (A large bronze lamp) on the stage followed by the beat of Suddha maddalam (a percussion instrument similar to Mridangam) marks the ritualistic beginning of a Kathakali performance. A colourfully decorated piece of cloth called "Thirassiila" functioning as a curtain, movable to any part of the stage, is held by two persons  just before the entry and exit of all  main characters and on other specific occasions such as manifestation of deities.  This is a traditional theatrical device to transcend time and space. The curtain is also used to signify the start and finish of each scene. 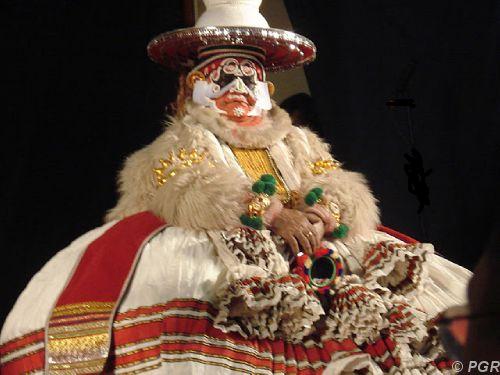 The make-up of Hanuman

Kathakali plays have their themes selected  from the great Indian epics, Raamayana, Mahaabhaarata, and the Bhaagavata. Some of the most famous Kathakali stories include "Nala Chartitha' (Story of Nala), Kalyana Saugandhika (The search of Saugandhika flower and famous Hanuman-Bhima encounter), Keechkavadhom (The killing of demon Keechaka), Duryodhanavadhom (Killing of Duryodhana ) etc. Love, Separation, virtue vs vice, comic-relief, emotional struggles, gruesome-war and murder are common scenes in the  Kathakali plays.

In "The God of Small Things", novelist Arundhati Roy describes in vivid prose the ‘secret’ of these ‘Great Stories’ adapted for kathakali performance, and their popular appeal:

"the secret of the Great Stories is that they have no secrets. The Great Stories are the ones you have heard and want to hear again. The ones you can enter anywhere and inhabit comfortably. They don’t deceive you with thrills and trick endings. They don’t surprise you with the unforeseen. They are as familiar as the house you live in. Or the smell of your lover’s skin. You know how they end, yet you listen as though you don’t. In the way that although you know that one day you will die, you live as though you won’t. In the Great Stories you know who lives, who dies, who finds love, who doesn’t. And yet you want to know again. That is their mystery and their magic." 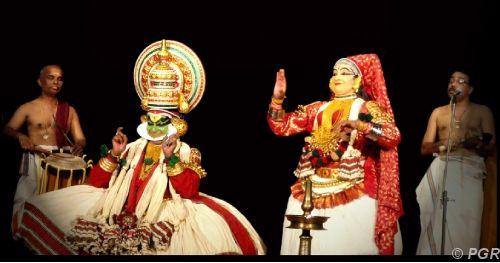 A scene from Nalacharitham (Story of Nala and Damayanthi)

The padams (verses) in the text of the play is sung by the principal and supporting vocalists. Vocal musicians or Bhagavathars standing at the corner of the stage sing, the lead singer called Ponnani bhagavathar keeps time with a resounding gong called the Chengila. He is assisted by Shinkidi (Assistant)who plays a pair of Ilathalam (small cymbals).

The dancers semiotically translate the songs into appropriate gestures, movements and ex-pressions.  Chenda and Maddalam are the two major percussion instruments used in Kathakali.  They provide audio effect to the performance by tracing the character  behavior, which includes both the Aangika (gestural) and Saatvika (emotional) aspects of Abhinaya (acting).  The Percussion artists have ample scope for improvisation in this dance. A strong and loud percussion instrument like "Chenda" yields in the hands of a maestro like Kalamandalam Krishnankutty Puthuval to depict the 'gentle laugh of a baby' or 'the snore of a demon'.

All padams (verses)  performed by the actor-dancers, constitute the ‘dialogue’ of the play, and occupy a majority of a performance’s duration. When padam are performed, the entire ensemble is involved as the lines are sung by the vocalists, the actor-dancers ‘speak’ each line with hand gestures as well as enact the narrative, and the  percussionists set and keep the basic rhythmic structures and times within which the lines are sung/spoken/enacted. Each padam usually has three parts: the pallavi (refrain), anupallavi (subrefrain), and caranam (literally ‘foot’). While the anupallavi may be omitted from a padam, there are usually several caranam. It is in the performance of the padam that we encounter kathakali’s characteristic form of repetitious double-acting of each line of the text. As a general rule, each line of a padam is enacted at least twice by the actor-dancer while the line is sung repeatedly by the vocalists.

Kathakali music belongs to the Sopana category of music which is typical of Kerala and is characteristically slow, strictly adhering to the thala (rhythm) giving full scope for abhinaya (acting). The dancer mimes according to the padams (verses) which helps the audience grasp the conversation, mood etc of each character on stage. The lead Bhagavathar plays a key role in a Kathakali performance. He is not just the singer, but also the manager of the entire show. As such he has sound knowledge of the story being enacted, the characters and all the verses. As the caretaker of the show he controls the length of each act according to its importance, and ensures that all equipment including weapons (wherever used) reach the stage on time. The ragas selected for each stanza would accentuate the mood of each section of the performance score; they increased the variety of rhythmic patterns and speeds used in performance, including slower tempos so that  the action itself could be made more subtle and stylized. The singer also enjoys the freedom to manipulate the duration of each scene through his music.

The two styles of Kathakali prevalent today are popularly known as 'Vadakkan Chitta' (Kalluvazhy or Northern Style) and 'Thekkan Chitta (Kaplingadan chitta or Southern style). It is said that the Southern one is "Lokadharmi'  (Realistic Representation) and the Northern one is 'Natyadharmi' (Stylized Representation). This means that if one has to depict a monkey, the Northern style may go by its measured Mudra for a monkey while the Southern actor may show the gestures of Monkey for easy grasp by the audience.

The credit for Northern style in standardizing the customs and rituals in Kathakali goes mainly to Kaplingattu Namboodiri. The southern style is more realistic and is characterized by rapid movements on stage, penchant for emotional drama, histrionics and humor during the improvisation mode or Manodharma and their affinity for elaboration of Puranas. The greatest Kathakali dancer of 20th century, the late Kalamandalom Krishnan Nair, was a unique blend of both these styles. It is vocalized that 'Bhava Abhinaya' is better in Southern style than in Northern style.

The most dominant colour of 'Kathakali" is black or rather darkness. It is like a picture that takes the most spectacular image in the background of darkness. All its ethereal beauty vanishes as the day rushes in. That is what imparts a dreamlike quality to Kathakali. I cannot think of seeing a Kathakali during day. May be it is this aspect that grants this great spectacle an ephemeral quality - like an enchanting spectacle that vanishes before our eyes as the day breaks in. 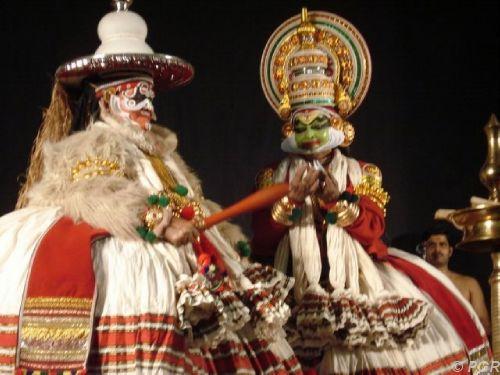 A Scene from Kalyana Souganthikam
(Hanuman and Bhima. Hanuman returning the mace back to Bhima)

The 'Aharya' (Sartorial or make up) aspect of this art is the most striking and stunning element of Kathakali. It must have been evolved after a careful analysis of ancient murals, sculptures and paintings. In Kathakali, the makeup creates a superhuman and celestial sensation and effect. Like a painting, Kathakali make-up and costuming is intricate, elaborate and colorful. It takes about three hours for an actor to transform into a full-fledged character with facial make-up, head-gear, ornaments and colorful costumes. The duration varies according to the character and complexity of the costume. Theppu is the first stage where the artiste himself applies the basic facial paintings. On this the Chuttikkaran (makeup man) puts the Chutti which forms the second stage of the makeup. The Chutti plays a crucial role in differentiating the characters and their personality and has the following basic classification: Pacha (green), Kathi (knife), Thadi (beard) and Kari (black). 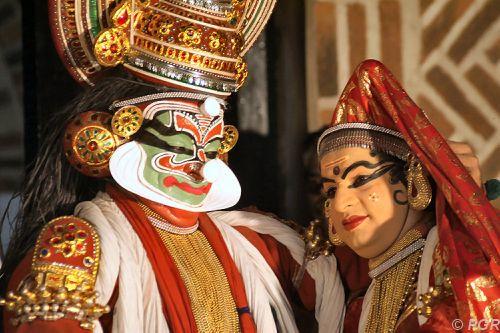 A Kathi Face-make up - Usually for Villians like Ravana , Keechaka etc.

The absolute identification of the character with the actor is the lasting emotive influence of Kathakali in the viewer's memory. Kathakali dance is more emotive than any other classical dance due to its inherent freedom, built within its structure itself, which allows each actor ample opportunity for improvisation. Great actors often transcend the real legendary heroes and heroines they depict when they come on stage. Fortunately most of the 'Puranic' characters in our epics like Arjuna or Krishna convey a sense of infinity (One does not know where Arjuna or Krishna starts or where he ends) to the audience. This imparts a superhuman element to the visual image of the actor as if they are of celestial origin. 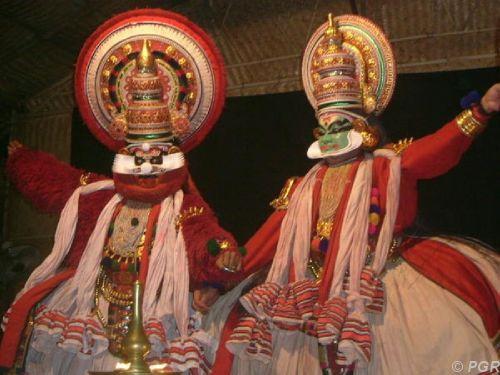 The complete absence of Oral communication by the actor in this most communicative dance is a paradox in itself. A Kathakali actor creates mountains and rivers with astonishing felicity and dexterity by the swift and supple movements of his fingers and alternating facial expressions. It conveys a lasting impression that this mode of communication is far more savvy, lofty  and peppy than the Oral. The only hitch is that the audience requires a certain amount of mental preparation, such as mastering of the meaning of mudras,  to fully appreciate the subtleties of  this dance. This then is the case with all arts such as Painting or Classical Music or even literature.

Finally, one is reminded of the lines of WB Yeats when a great Katahkali actor mesmerizes the audience with his symphony of symbols to fashion the final fusion of the dancer with the dance:

"O chestnut-tree, great-rooted blossomer,
Are you the leaf, the blossom or the bole?
O body swayed to music, O brightening glance,
How can we know the dancer from the dance? "