The God With Very Few Temples 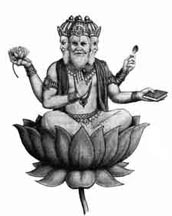 Amongst the thousands of Hindu religious places of worship in the world, very few Temples are dedicated to our Supreme Creator Brahma Ji - Why?

In the Hindu Trinity of Brahma-Vishnu-Shiva, Lord Brahma is the Creator of the Universe and all living beings are said to have evolved from him. Brahma is also believed to have created the Saptarishi, or seven great sages, to help him create the Universe.

When Brahma creates the world, it remains in existence for 1 of his days, which means 2,160,000,000 years in terms of Hindu calendar. The world is said to exist for one Kalpa, or one day in the life of Brahma. Brahma is then believed to go to sleep for one night, which is as long as a Kalpa. When Brahma goes to sleep at the end of his day, the world perishes in fire. When HE awakens, HE again restores the whole creation.

This process (Pralaya) goes on till 100 years of Brahma's life is completed, which is the life span of Brahma. When this period ends, HE himself loses his existence, and HE and all Gods and Sages, and the whole universe get dissolved into their constituent elements. And this whole process of creation and destruction repeats itself ceaselessly, the world getting re-created endlessly...

Inspite of the above immense role, Why only a few Temples of Brahma in the World?

Legend has it that Lord Brahma is said to be very liberal with granting boons and is easily pleased when prayed to without any thought as to who is praying and asking him for a boon. HE is rather callous in granting boons to the demons unguardedly.

All the deadly demons, from Hiranyakashipu to Ravana, received their boons from Brahma, which made them singularly notorious in destroying the noble virtues of the world. Then it became necessary for Lord Vishnu to appear in his various reincarnations to kill these demons.

That is why the cult of Brahma's worship declined as HE became unpopular amongst religious devotees who began to deem Brahma as the sole God of worship for the demons. Another reason why Brahma is not widely worshipped is the belief that being the Creator, his work is complete, at least for the time being.

Hence, there are innumerable temples of Lord Vishnu and Lord Shiva around the world, while Lord Brahma has only very few temples, all in India, the famous ones are the temple at Pushkar Lake in Ajmer, another in Khokhan - Kullu Valley and the other at Khedabrahma in Kerala.

And how many Heads does Lord Brahma have ?

Well, again Legend has it; Brahma originally possessed one Head. From a part of his own body, HE created a woman Shatarupa (a face with 100 beauties). She is also known as Savitri, Brahmi, Saraswati (Goddess of Knowledge), Gayatri (the triple hymn or the Gayatri Mantra), Sandhya. And is the Consort of Lord Brahma.

Brahma fell in love with his own female creation and could not take his eyes off her extraordinary beauty. Shatarupa felt shy and tried to evade his gaze by moving away on all sides. To follow her wherever she moved, Brahma created his 5 heads.

According to the Puranas, Brahma and Vishnu were once arguing over who was superior of the two. They discovered from the Vedas that Shiva was the Supreme Being. Brahma however, spoke disparagingly about Shiva. In anger, Shiva opened his fiery 3rd eye, and burnt off the head, which had spoken, and therefore Brahma was left with 4 heads.

According to Shiva Purana, from the incestuous union of Brahma and Shatarupa was born Svayambhuva Manu, the progenitor of Man, and from him in turn all creatures as depicted in Manu-Smriti. According to Manusmriti, the span of a human life is 100 years. Every Hindu man should spend a part of his life in each of the 4 Ashrams to fulfill his obligations: to the sages by studying (Brahmacharya), to his ancestors by raising male progeny (Grihastha), to the Gods by performing penance and sacrifices (Vanaprastha), and for the salvation of his soul by renouncing the world (Sanyasa). This was assuming, of course that he lived his full life span.

Lord Brahma is also the Creator of the Beautiful Ahilya, whom HE married off to Sage Gautama. She became a piece of rock, being cursed by her husband, because she was seduced by Indra, The King of Heavenly Spirits. She was brought to her natural form when the rock was touched by Lord Rama's feet, and then Ahilya got reconciled with her husband, Sage Gautama.

Brahma's abode is known as Brahmaloka, which is said to contain all the splendors of earth and of the heavens of the other Gods. His vehicle or Vahana is a white swan or goose, which has magical abilities: it can separate soma and milk from water. Therefore the bird Goose, is also a symbol of sifting good from evil. His Consort Saraswati, is the Goddess of wisdom and science, the Mother of the Vedas, and the Inventor of the Devanagari script.