September 2010 will go a long way in the memories of the people of Uttarakhand, when the heavy precipitation on 18th and19th lead to the failure of several slopes, bringing the movements of vehicles to almost standstill. Not only Uttarakhand, barely a month ago in August, Leh (Ladakh) had witnessed heavy landslide/scree-slide (Read: ‘Perished on the roof of the world’). Hill slopes are tricky. It takes years for slopes to stabilize. Lots of factors make them stable, like the rock types, their attitudes, joints and fractures in the rocks, vegetation on the slopes and above all the quantum of rainfall and drainage. 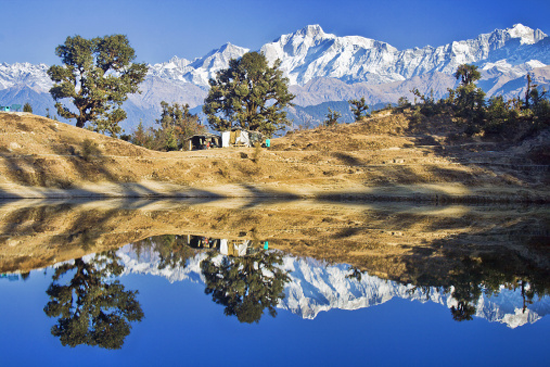 Recent study based on the data sent by Indian Weather Satellite Kalpana I by Subrat Sharma of G.B. Pant Institute of Himalayan Environment and Development (GBPHIED), Almora, Uttarakhand, India links the phenomenon of sudden heavy rainfall and Hill slope failure in Uttarakhand with regional monsoon event between Myanmar and Middle East. The hydrology of the Himalayan region is complex says Sharma. Three fourths of the total amount of the rainfall in the region occurs during the short monsoon period. A characteristic feature of this rainfall is that it occurs mainly during nights.

The stable hill slopes get affected by the quantum and intensity of rainfall. A lot depends upon how much of this water travels to the depths of the slopes and how much water flows down the slopes. The later also immediately affects the discharge of the rivers in the plains and consequential floods. Satellite imageries help in predicting the weather conditions, movement of clouds etc. and help in predicting rainfall in the hills. In order to refine his predictions, Sharma used the satellite imageries from GeoEye.

The images showed concentric landslips in Uttarakhand. One might be wondering why such slips developed more in Uttarakhand! One must understand that water acts as a lubricant for lose material on the hill slopes. Sudden, heavy rainfall causes formation of subsurface channels that carry water down the slope. These channels abet and augment the slope failures. These channels cause heavy damage to the settlements on their way. Since the houses on the slopes become obstructions on the path of these subsurface channels, the heavy pressure of water uproots whatever comes in its wake. Plus these channels lubricate the rock mass above and it hurtles down the slope by gravity, uprooting trees and houses whatever comes on the way. Many times the velocity of this mass wasting is so high that after reaching the valley it crosses the river, partially damming it and rises up the slope on the other side, destroying settlements or fields. This type of landslide was witnessed by the residents of Madhya Maheshwar in Uttarakhand in August 1998.

The subsurface channels of water play havoc in many ways. During the heavy landslides of September 2010, the houses on the hill slopes, particularly where terraced fields were in plenty witnessed something unique. Subsurface water began erupting at several places down the slope and Sharma reports that in many houses the in the room used for tying the cattle in the ground floor, termed as ‘Goth’ water began to ooze in from below, at times submerging the entire room. Naturally this unexpected, excessive seepage damaged the houses too. So heavy was the toll of the landslide that a nearly 20km stretch of road and buildings in the Kosi valley in Nainital District were washed away. This excessive mass wasting filled up the river with debris, which was carried further downstream to the plains. The sediment laden rivers there affected the life, flooded several villages and Delhi-Bareilly-Lucknow highway remained choked for several days.

Since a large area was affected by the freak weather and considering a possibility of a repetition Sharma studied in detail the data available from Kalpana weather satellite and also the data available at the IMD station at GBPHIED , Aryabhatta Research Institute of Observational Sciences (ARIES), Nainital and Government Inter College, Dwarahat. Fortunately Sharma could also access the 30 min interval rainfall data from the weather tower at GBPIHED.

The main culprit behind the mishap was rainfall. And Sharma found that except on the night of 4 September, the rainfall was normal in 2010. But there was a heavy rainfall between 15 and 18 September 2010(215.8-711mm). It was surprising that 64% of this rainfall took place on 18thSeptember. It is needless to emphasize that water acts as the best lubricant for the lose debris and fractured rocks on the hill slopes. Aided by gravity and lubricated by water this mass moves downwards.

Sharma also observed that such sudden rainfall could not have taken place without cloud precipitation. Satellite pictures confirmed his hunch and it was found that on the nights between 17 and 19 September there was heavy cloud precipitation. Clouds had swiftly moved from China, Myanmar, Thailand and Indonesia-covered a distance of 1950 km in one and half hours. The density of these clouds was highest over Uttarakhand and parts of Yamuna valley in neighboring Himachal Pradesh. The heavy rain caused heavy floods in the plains. Due to the rainfall, the hill slopes bereft of trees were eroded fast and the denuded material reached the streams. The extraordinary load of the sediments caused the river levels to rise and at places the road between Khairna and Sualbari on Kathgodam-Almora road were submerged in the Kosi. Long stretches of road vanished, as if it was dissolved in water!

With the help of meteorological data, Sharma found that a jet stream of dense clouds migrated over the Himalayan region from east to west twice between the night of 17 and 19 September. The cloud movement was so fast that they covered a distance of 1950 km in half an hour. Thereafter thick clouds hung over parts of Uttarakhand and Himachal Pradesh, west Bengal and Orissa for more than 11 hours. The density of clouds during this period was very high in the areas mentioned. A similar pattern of clouds was seen on 19thas well, says Sharma but then the density was lesser.

It was thus apparent that movement and accumulation of clouds over a particular region of the Himalayas can lead to severe rainfall. The possibility of a warning system is very much there. For which Sharma recommends:

The processed information will have to be quickly transmitted to the District Magistrate and other related authorities for effective preparedness to prevent losses.

Due to massive construction activity the hill slopes have been disturbed. In the process of development the forest cover has also been reduced. There is a need for massive plantation and also to take appropriate precautions while allowing new constructions. Proper drainage can prevent many slopes from moving down. It may be noted that today Nainital is there because of the effective network of drains developed by the British. Water if allowed to percolate to depths acts as an ideal lubricant which moves the hill slopes downwards.

Prevention is always better than cure.