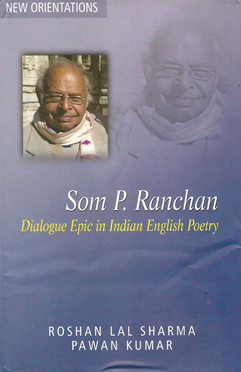 Dialogue besides being the speech of characters in a play or a narrative could be a literary genre in which characters discuss a subject. Dialogue Epic in Indian English poetry is a new innovation by the now octogenarian Professor Som Prakash Ranchan, an academic and a prolific writer, poet and spiritualist. He wrote epic poems like Padamsambhava and epic cycles like She: A Tantric Poem on the Eternal Feminine Devi, and Nigamas for the Age to cite only a few.

In the Dialogue Epic the poet-sadhaka and the divines (called Wisdom Figures) like Sharada Mai, Vivekanda, Sri Aurobindo, Jiddu Krishnamurty and Baha‘u’llah converse and illuminate both the poet and the readers. The aspirant or sadhaka is the poet-speaker whose purpose or ambition it is to know the ultimate truth, sublimity and the ideal of human action with commitment and devotion to the Absolute Reality.

The Dialogue Epic is a work of imaginative and intense spiritual poetry of the highest order where divines illuminate and inspire the poet-speaker with utmost compassion and celestial grace of the wisdom figures.

The authors of this book under review have spoken to the writer in person, besides culling important parts of the distinguished dialogues. Besides a long and lucid introduction about the emergence of Indian English Poetry (now a days called preferably Indo-English Poetry) right from the pre-independence days to the most recent years, there are six chapters and a recapitulating conclusion. To begin with there is a chapter about a face-to-face with Ranchan by Professor Sharma. The second chapter is about Dialogue Epic as a genre. The third chapter Dialoguing with Indian Wisdom Figures is the longest and the most important in nearly sixty pages. The fourth, fifth and sixth chapters are dialogues with Jesus Christ, the Buddhist Manjushri and Baha‘u’llah and finally there is conclusion.

Professor Ranchan is both a traditionalist and a modern. Tradition and modernity are both his mental as well as spiritual interests. Being an intensely spiritual/imaginative poet he has understood spirituality by his dialogues with the world’s spiritual luminaries oriental and occidental. The mode he selected and utilized is to draw inspiration and provide illumination from exegetes of spirituality, the poet calls wisdom figures right from Sharda Mai, Swami Vivekananda and Baha‘u’llah besides Sri Aurobindo and Jesus Christ. The authors of this book quote Ranchan’s expression of his genuine thought revealed to Atmaram: “It seems to me that an Indo-English poet should first ground himself in his own culture, myth, experience, its sublimities and contaminations, go into the voyage in this, activate deeper layers and then make connection with the best abroad. I subscribe to the harmonizing of the East and the West and not this(sic) bastardly worst of both the cultures.’(p.20)* It is high time we called our English poetry Indo-English Poetry suggesting the sublimity of Indic thought, imagination and spirituality. The chapter on Ru-ba-ru is the report on the poet’s thinking. Sharma tells us that Ranchan lived like a sanatani as he had an instinctive faith and an intense knowledge of our dharma. This is the quality of his sahridaya as a thinker and his aardrata of a highly evolved soul.

Fifty years ago even before going to the US as an academic/ thinker/spiritual exegete. Ranchan wrote Splintered Mirror in 1960. Sharma quotes Ranchan as having said “None, no poet/author has shaped my poetic thought in particular”. Ranchan is well read and mentally psychologically and spiritually well equipped. Freud, Jung and Adler he understood as a teacher teaching US students. This equipment brought sharpness in the thought as well as expression –most importantly in his poetry and dialogue epics. Writes Sharma: ‘Ranchan invented the genre of dialogue epic to suit his creative purposes.’(p.28) The genre has become the most powerful - and so successful - medium to convey his understanding and erudition of matters spiritual.

The second chapter is about the genre, the dialogue epic. The writers pointed out “For Ranchan, Dialogue Epic is conceived and executed as a poetic dialogue wherein the wisdom figures from diverse religious traditions of the world are placed in the guru/master/murshid locale and the poet himself assumes the role/voice of a seeker /disciple/murid representing humanity at large.” (p.30)The object of the poet-speaker is to rouse feeling and intention to contribute to a clear understanding of issues relating to life and thus take the reader to a higher level of spirituality, raising the level of his consciousness. (The bibliography in the book shows us that Ranchan has published eleven Dialogue Epics from 1982 to 2011. The last one is Dalai Lama: Talkathon, New Delhi, Book Plus, 2011.)

The third chapter Dialoguing with Indian Wisdom Figures is the longest and the most enlightening. Ranchan believes that talking to wisdom figures offsets narrow involvement with ego problems. The focus finally is on ‘Who am I’. (Sri Ramana, widely revered as Ramana Maharshi, for some reason, is not included in the Dialogues though Sri Ramana’s self-investigation is just this ‘Who am I’.) Bhakti is devotion and absolute faith leading to total surrender. These are aspects differently emphasized by Indian Wisdom Figures. Mother Sharda and I was published in 1982. It is an imaginative/poetic spiritual looking up at the divine personality of Sharda Mai. It was on the basis of Swami Nikhilananda’s The Holy Mother. Ranchan writes, no, sings –

Thou immaculate fount of purity

Kali is the Sublime Mother and the poet Ranchan sings her praise:

From the cuticle of Your little toe

Of worlds on worlds

The authors Sharma and Kumar tell us: “Ranchan also presents the Mother in Her varied aspects as ‘Mother, Hetaria. Amazon, Virgin Mother, Medium etc.’ “This reveals the inclusiveness and extensiveness of Ranchan’s scholarship and devotion. He has wise and deep knowledge and understanding of wisdom figures in different faiths. From Sharda Mai the authors go to the dialogue of the poet with Swami Vivekananda, the most devout of Mai. To Vivek then I Came raises questions while interacting with the Swami to unravel knots that bother the poet-quester. The poet was told thus:

The bourgeoisie drives for personal security

Your existentialism, just seen, is an I-Thou gestalt

An integral leap of you and your world

It’s not spinning the wheels in slipping sand dunes

This leads Ranchan to realize the importance of self-discovery.

The fourth part is about Ranchan’s Soul-Making with Sri Aurobindo (1986) in four parts which is a succinct portrayal of the change and growth in the poet-seeker. The fifth part is To Krishna with Love (1986) The Lord’s declaration is a resounding exhortation not only for the poet but also for all the right believing:

I am the ineffable transcendence

What have I to do with the deconstructions

Of your Lilliputian mind and dark recalcitrant lives

I am the Mysterium Tremendrum

In the notes we are told about this phrase as a metaphor for the Mother as Divinity incarnate.

The sixth part is about the dialogue with Jiddu Krishnamurti, the one who held conditioning responsible for the actions and beliefs of man. The Man Said: An Encounter with Krishnamurti (1998) reveals how the wisdom figure denounces guru-sishya dynamics, belief in sect/s and conditioning of all sorts. This 20th C wisdom figure disapproved of scriptures as they have ‘spawned bigotry and hatred/ Murder and Myhem’. The authors tell us that Ranchan is satisfied that ‘Being ‘negative metaphysician’ the Man is against organizations, schools and systemized thinking. (p.89)

Chapter four is about Ranchan’s Christian connection as seen in Christ and i (1982) We are told that Ranchan never tampered with his ‘inner space’ but allowed it to be enriched by a range of experiences and faith. While in the US he became the President of the Church of Antioch. The central motifs of the poem are suffering, intellectuality and the problems they raised and also affluence which he called ‘inflation’. We are also told that Ranchan magnified Mother Mary through Durga. In this dialogue poem there is a fusion of lyricism, dramatic encounters and chants.

Chapter 5 is Manjushri: Buddhist Strain in Indian English Poetry. Ranchan has a deep understanding of Chogyam Trungpa, a teacher of Tibetan Buddhism. Manjushri is considered wonderfully auspicious and sweetly religious. A bodhisattva, he is a figure of great renown in the Mahayana Pantheon. Then there is a discussion on the poem Manjushri: Tibetan Buddha. The authors treat Manjushri as a typically Buddhist poem placing God below the humans.

In Chapter 6 ‘Negotiating Baha ‘i’ faith the authors see another milestone in Ranchan’s inter-religious poetic dialogue. Professor Anil Sarwal, Secretary General of the National Spiritual Assembly of the Baha‘i’s of India’s appreciation and veneration is quoted: ‘One sees Ranchan relating to the universal in the Baha’i’ Revelation from the standpoint of the world today and his own location in it and thus at times comparisons crop up that might be valid but may become redundant as the time passes, especially Baha’i’ teachings of Oneness of God, Oneness of Religion and Oneness of Mankind take a deep root. Baha’u’llah: A Talkathon was published in 2003. Ranchan leaves an important message in this dialogue epic that entrenched in dungeon darkness where ignorance thickens Baha’u’llah’s universal vision is the need of the hour. He writes:

Your parole is culture specific though universal

it comes from the Middle East

motifs from the Bible, Quran

In adulation Ranchan calls Baha’u’llah ‘an eidolon’ in the mid-heaven where he could commune with God effortlessly’.(p.140) He sides with Baha’u’llah

Which may have been cartographed

calling him a highly enlightened human being an ‘Insan-e-Kamal’.

In ‘Conclusion’ the authors write that each of these dialogue epics has a context and division of parts of its own. The poet’s greatness consists in, as the authors say, ‘inventing, innovating, experimenting, and analyzing the complex curves of his own experiences in comparison with the feelings and beliefs in the people around.

This is an extraordinary book, designed and executed with intense understanding and reverence for the poet and his skill in designing the technique of expounding and explaining spiritual beliefs which are not everyone’s cup of tea. The book helps devotees foster in themselves an inclusive and eclectic spirituality.

(*Page numbers relate to the text under review)