Continued from “Best Prime Minister We Never Had”

Despite the wise counsel of Michel de Montaigne, the eloquent exponent of French Renaissance, that “sowing questions”... “make(s) the world teem with uncertainty”, it is sometimes necessary to indulge in the exercise, especially when the domain of dead certainties make uncalled for encroachments on rational debate. (One of such categorical assertions is to unhesitatingly declare Sardar Patel as one of the authors of the Partition of India. This indeed has been the reaction of some readers of the previous piece.)

May I pose two questions to my readers which will validate the relevance of the more relevant, third question.

May I begin with Question No. One, which in fact is a widely used instrument of management development used by practitioners of organizational development – a profession that I once belonged to. It is:

Read the following information below and then complete the information at the end of the sheet.

John, age 54, was dead on arrival. His wife drove him into an emergency room at 2:00am, but even before she pulled into the driveway his tortured breathing had stopped. Successive attempts by hospital staff to revive him failed.

John’s doctors said he was sorry. He could not make house calls as there was shortage of doctors and he was putting in an eighty hours workweek. Besides, Mrs. Doe had called at 1:00 am on Christmas morning. The doctor had told her to rush to the hospital.

The hospital administrator was sorry. When the patient had asked to be admitted in the morning, his condition was not acute. The patient had used up his insurance benefits for the year and had no other resources. The hospital had exhausted the charitable reserve fund and was required to limit admissions to “Paying” patients or those who required emergency and acute care.

The caseworker form Department of Health and Social Services was sorry. She had explained to the patient that the state health program would cover him only after he had incurred one hundred dollars in medical bills. If he entered the hospital without incurring the amount in the bill, the entire hospital stay would be disallowed for coverage by her office. It was the law.

The people who made the laws said they were sorry. They had to balance the state’s budget at the time when highway costs and educational expenses were going up. Originally the bill to establish the medical benefits would have cost the taxpayers an estimated eighty thousand dollars annually. By strategic amendments, such as the one that discouraged John’s admission, they saved the taxpayers three-fourth of the cost of the original bill, nearly 6 million dollars.

The people who elected the lawmakers were sorry. They had not wanted their taxes raised, so the voted for the candidate who promised to contain expenses and reduce wasteful govt. expenditure. When a few political leaders announced that taxes would have to be increased to continue human services, the votes sent letters to their representatives to prevent any such increase.

Mrs. Doe was sorry. She was sorry that her husband died on Christmas morning and she was also sorry that they had not saved more for their old age or joined more comprehensive insurance plans offered by the union.

Instructions: Most Responsible for the death – Rank 1 and so on…

Complete individual ranking first. Then discuss the case with a few others who also do their personal ranking.

The purpose of the exercise is to determine what we deem as the boundaries of individual responsibility and where and to what extent the institutions we live in, impinge upon it, and condition and control it.

And all of us have different views. American Republicans will straightforwardly declare John Doe as the culprit while Democrats may see in it a case to defend Obamacare.

I look forward to the considered opinions of my esteemed readers.

Who’s Responsible for the Mahabharata War?

Certainly not anyone of the above may be cited as the universally agreed reason for the Mahabharata War, and all the death and destruction wrought by it. The story is far too familiar to need a brief.

Do the same ranking as per Question One

And finally to Question No. Three

Who’s Most Responsible for the Partition of India

It will be most interesting to have a survey of the views and perceptions of our readers.

Here is a backgrounder for the third and most significant question relevant to the reassessment of Patel – the basic theme of this essay.

How the East India Company came to rule large areas of India with its own private armies, exercising military power and assuming administrative functions, is all too well-documented. I take all that for granted. Company rule in India effectively began in 1757 after Clive won the Battle of Plassey. It lasted till 1858 when, following the collapse of the 1857 Revolt, the Government of India Act 1858 was passed. Consequently, the British Crown assumed direct control of India and with that began the new phase of British Raj.

Lest there should be another challenge to the British rule, the Empire builder busied themselves devising and perfecting – as only the Brits can – tools and techniques to divide and rule the Indians. The first seeds sown that later blossomed into the full-fledged Pakistan Movement was the Two-nation theory initiated, obviously at the British initiative, first of all by Sir Syed Ahmad Khan – knighted by Her Majesty for his bold initiative – and the effort of the Muslims to ingratiate themselves to the new rulers.

The first blossoms of separatism appeared in1906 when the British announced their intention to establish Legislative Councils. The Muslims were egged on to represent for special representation for being loyal subjects. A 35-member delegation representing various regions of India and led by that wily fox, Aga Khan III called on the Viceroy, Lord Minto to plead for special deal for the Muslims. That indeed suited the British policy of divide and rule.

Unwittingly, Viceroy’s wife, Lady Minto let the cat out of the bag by her entry in the Diary she maintained. On the evening of October 1, 1906, she received a letter from a high-up official whose name is not disclosed in the Diary, which read:

I must send Your Excellency a line to say that a very big thing has happened today, a work of statesmanship that will affect India and Indian history for many a long year. It is nothing less than the pulling back of 62 million people from joining the ranks of the seditious opposition. ( I’ve highlighted statesmanship – the new name of Machiavellianism.)

(Jaswant Singh’s study Jinnah has more interesting details of the above-referred Diary entry on pp 51-52 of his book. He points out how the system of communal franchise got embedded via the Montford Reforms. He quotes Lord Olivier, Secretary of State for India in the Labour Government under Ramsay MacDonald, who admitted it in as many words:

No-one with any acquaintance of India affairs will be prepared to deny that on the whole there is a predominant bias in British officialdom in India in favour of the Muslim community, partly on the ground of closer sympathy but more largely as a make-weight against Hindu nationalism.

Now tell me, dear readers, what is the share of responsibility of John Bull in the Partition of India, which they were desperately keen on to achieve their long-term strategic vision of the region that India is a vital part of.

The Lahore Resolution (sometimes called the “Pakistan Resolution”, although it does not contain that name), is the next – may I add –— logical step in the Pakistan Movement. It fully embraced the Two-Nation Theory and called for a union of the Muslim-majority provinces in the northwest of British India, with complete autonomy. Similar rights were to be granted the Muslim-majority areas in the east, and unspecified protections given to Muslim minorities in other provinces. The resolution was passed by the League session in Lahore on 23 March 1940.

Meanwhile, in 1939 Indian nationalists were angry that British Governor-General of India, Lord Linlithgow had, without consultation with them, brought India into the war. The Muslim League supported the war, but Congress was divided. At the outbreak of war, the Congress Party had passed a resolution during the Wardha meeting of the working-committee in September 1939, conditionally supporting the fight against fascism, but were rebuffed when they asked for independence in return.

World War II sparked a crisis in relations among the British, the Congress and the Muslim League. The British expected India once again to provide much-needed soldiers and materiel for the war effort, but the Congress opposed sending Indians to fight and die in Britain's war. After the betrayal following World War I, the nationalists saw no benefit for India in such a sacrifice. The Muslim League, however, decided to back Britain's call for volunteers, in an effort to curry British favor in support of a Muslim nation in post-independence India.

The Quit India i.e, Bharat Chhodo Andolan, or August Kranti as it is popularly called was a civil disobedience movement launched in India in August 1942 in response to Mohandas Gandhi’s call for ‘Satyagraha’ . The All-India Congress Committee proclaimed a mass protest demanding what Gandhi called “an orderly British withdrawal” from India. The call for determined, but passive resistance appears in his call to Do or Die, issued on 8 August at the Gowalia Tank Maidan in Mumbai in August 1942.

In retrospect, it was, according to many, a grave error of judgment of Gandhi. The Muslim League had a field day while the Congress leadership languished in prisons.

Towards the end of war, public opinion in Britain had swung against the distraction and expense of maintaining an empire. Winston Churchill’s party was voted out of office, and the pro-Indian Independence Labour Party was voted in during 1945. Labour called for almost immediate independence for India, as well as more gradual freedom for Britain's other colonial holdings.

The Muslim League under Mohammed Ali Jinnah, launched afresh the public campaign in favor of a separate Muslim state, while Jawaharlal Nehru of the Congress pleaded for a unified India.

In February 1947, Attlee announced on the floor of the House of Commons that the British government would grant independence by June 1948. The new Viceroy Lord Louis Mountbatten pleaded with the Hindu and Muslim leadership to agree to form a united country, but they could not. Only Gandhi supported Mountbatten's position. With the country descending further into chaos, Mountbatten reluctantly agreed to the formation of two separate states, and moved the independence date up to August 15, 1947.

Thereafter, inevitably – almost inexorably – events unfolded leading to the Partition of India egged on by Jinnah’s insatiable ambition and Nehru’s desperate hurry to take over the reins of office from the departing British.

Continued to “Reading the Writing on the Wall” 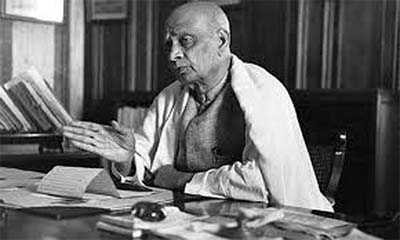 Sardar Patel Assessed (All the Links):