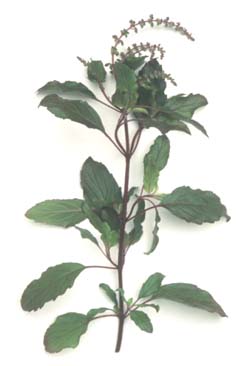 Basil falls under the category of herbs. It is a small plant which is branched, erect and two to three feet tall. Leaves are usually green with toothed margins and dotted with minute oil glands. When crushed, leaves give a strong fragrant scent. The flowers are small, usually purplish in slender spiked clusters. It bears tiny fruits and yellow-red seeds.

Botanical name of sacred basil is Ocimum sanctum. Ocimum is derived from a Greek word Ocymum which means sweet herbs while sanctum refers to holy. In India, it has different names in different parts of the country. In a large Hindi speaking belt, as also Bengali, it is called Tulasi or Vrinda. In Sanskrit, it is Manjari and in Marathi as Tulasa. In Southern states, it is called Vishnu Tulsi, Thulasi, Brinda/Gaggera and Trittairu in Kannada, Tamil, Telugu and Malayalam respectively.

Traditionally, Hindu civilization has always attached a great significance to the nature and natural objects and phenomenon. The earth is synonymized with mother. Water is considered to be the lifeline so rivers too are often symbolized as Goddesses or mothers. The great mountain Himalayas is revered like a fatherly figure. Objects like Sun, Moon, fire, water and air are treated like Gods and worshipped by an overwhelming majority. Similar treatment is also given to many plants, shrubs and herbs considered significant from environmental and health angles. Many legends too are popular in regard to these objects from the Puranas, Upnishadas and other ancient / holy  scriptures.

As per a popular ancient legend, Rajkumari Vrunda got married to a powerful Danav (Demon) King, Jalandhar and two were living a happy life. She was an ardent devotee of Vishnu, one of the most powerful Gods of all times. Later in a series of events, Jalandhar waged a war against Devas and one by one defeated all Devas including  King Indra and God Vishnu. Devas now jointly appealed God Shiva but initially he refused to intervene because he wanted to maintain neutrality in the conflict of Devas and Danvas.

However, later he found that arrogant Jalandhar keeps a bad eye on his consort Goddess Parvati (who was considered to be the most beautiful woman in universe), so agreed to fight a war with Jalandhar. In his war against God Shiva too, Jalandhar initially became victorious. So, a lot of brainstorming took place in the camp of anxious Devas and it transpired that the main reason for Jalandhar remaining undefeated was unclenching support of his faithful wife Vrunda. Before every battle, she used to pray to Gods and put a flowered garland around the neck of her husband. As the garland carried the blessings of all powerful Gods, it would save his life from all weapons and injuries. As queen Vrunda had soft corner for God Vishnu, he was persuaded to take the job of ending her faith and purity.

In the meantime, when Jalandhar found that Vrunda continues to worship God Vishnu even though the war was going on between Devas and Danvas, in a fit of anger he cut her tongue off to stop her prayers. God Vishnu reinstated her tongue which further angered Jalandhar and put her in dungeon. In penance, Vrunda blinded herself.

Another war broke between Jalandhar and God Shiva supported by Devas mainly due to former’s greed and attempt to forcibly keep Goddess Parvati as his consort. In the same time, Vrunda regained her eyesight only to find that Jalandhar has phenomenally changed with no ambition for war and hatred. They were spending a happy time together and then suddenly the severed head of Jalandhar shows up in the palace accusing Vrunda of her infidelity. Vrunda had always been true and faithful to her husband. She concentrated only to find truth that severed head was actually her husband’s and person with her was actually God Vishnu in disguise. It was obvious, Devas had succeeded in their trick and God Shiva had defeated and killed Jalandhar.

Now it was Devas turn to incur Vrunda’s wrath. She decided to give up her life and cursed Bhagwan Vishnu to turn into a stone. God Vishnu, in deference, obliged and held that she will transform to sacred Tulasi and henceforth he, as Shaligram, would be Tulasi’s consort eternally. Traditionally ever since, the Shaligram (God Vishnu’s stone form) and Tulasi are worshipped together i.e. God Vishnu’s worship without sacred Tulsi leaves is considered incomplete. There is a practice of Tulsi Vivah annually in many parts among Hindu households wherein the plant and the stone are married together.

Tulasi Vivah is an age-old tradition and is mentioned in the Padma Purana and some other ancient scriptures. Tulasi, or the Holy Basil, remains a sacred plant for the Hindus which symbolizes purity and is famous for its medicinal properties. Ekadasi (after Amavasya) in Kartik month to Poornima (the full moon day) in Kartik Month is considered auspicious for Tulsi Vivah. Many people celebrate it with great reverence and faith on the Ekadasi day or on Poornima day.

Basil plant has a lot of medicinal value too. The juice of leaves and seeds is considered useful in cough and colds as also in digestive problems. Almost every Indian household prefers to raise one or more basil plants at home. The plant is also an effective mosquito and fly repellant and oil extracted from its leaves destroy harmful bacteria and keeps away many insects. There is a general belief that Tulasi leaves have a unique property of curbing thirst. A couple of leaves if put under the tongue are stated to give an instant relief from thirst.

The basil plant is also called the Little Shrub Goddess by many. It is a general belief among many Hindu households that planting a Tulasi plant is essential in the house for happiness and prosperity. They usually plant it on a square pedestal before the doors of their house.