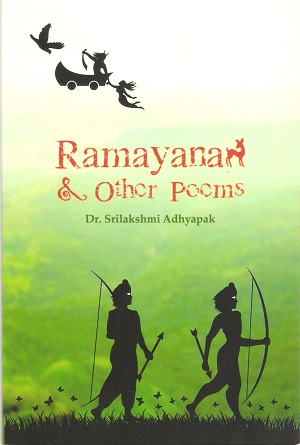 Prayer comes from faith and devotion. Poets of yore expressed their devotion in composing the epics as devotional literature. A poet’s composition depends on scholarship and accomplishments. Perspicuity, the quality of expressing clearly comes from birth, upbringing and education. Sage Valmiki is the divine poet and his magnum opus is the treasure trove of sagacity and a guidebook for believers and the corpus of about 24,000 slokas would go on inspiring and elevating our sensibilities. Any attempt at composing any work on the theme of Srimad Ramayana is a benediction from the Supreme Power.

Holy Ramayana the hoary composition of Maharshi Valmiki has been acclaimed for centuries as aadi kaavya. It is a delectable account of the accomplishments, achievements and divine attributes of God in human incarnation. Rama katha has been the source device for ardent devotees to achieve salvation. Ever extolled by poets innumerable devotees sang Sri Rama’s praise down the centuries. Kavi samrat Viswanatha Satyanarayana who wrote Ramayana Kalpavriksha, was asked once as to why he wrote another Ramayana again. He replied humbly in reverence that it was written since his devotion was his own. In Bharat there is no village where there is no ram mandir. Devout Hindus feel it is a kind of worship to write about the divine lord. The cardiologist Dr Srilakshmi Adhyapak has written the book under review adding seventeen other poems of her own to the brief rendition of the great epic.

Devotees know and recite naamaraamayana every day. This book reminds us of that for its brevity. The seven kaandas excepting the last Uttara Kanda are sung in just twenty-one metrical poems in English.

Devout Hindus feel that it is great worshipful service to write about Sri rama. The cardiologist wrote the epic in just twenty-one poems. The first poem is ‘The Birth’ singing the glory of the entry of the divine into this human world.

Glory resounded in a glow radiant
Dispelling gloom, in rhythm ebullient.
Cloudy ramparts tinged amber to the sun’s salute,
To the scion of his line, by divine statute.(p.2)

The incidents, episodes and occurrences are all too well-known. The poet’s descriptions have inspiring perception with brilliant insights along with extreme brevity. The occasion of Sri Rama winning Devi Sita’s hand after a test superb is described thus:

Bending the bow with its string to unite
Beholding the suitor worthy, the cosmic coil slackened in a trice.
A noise deafening, a peal of thunder,
As the bow into two, split asunder.
The princess comely garlanded his visage divinely chiselled,
Glory resounded in an ecstasy unbridled. (p.6)

After the abduction of Devi Sita by Ravana, ogre Maricha’s ruse is expressed thus:

The wonderful devotee Shabari is spoken about like this:

Fruits hand-picked for her lord,
Only the best offered a rapturous chord.
Amidst sun soaked stones arid,
a search for the simian prince , avid. (p.140)

Sundarakaanda acclaimed, revered and held securely in heart by devotees is the crown of this composition. Here is part of Hanuman’s quest described:

Hanuman’s exploits are captivating. After devoutly delivering the lord’s signet is the emissary is justly transported to ecstasy:

Her benediction, a grace sublime,
An armour impervious to ravages of time.
Wreaking havoc he sought,
Audience with the ogre, a lesson to be taught.
Trees uprooted, walls broken,
Inlaid beauty ravaged in token. (p.21)

Setubandhanam, constructing the bridge across the ocean, is a stupendous task. The poet calls it the divine bridge in the title of her poem. She briefly mentions Sri Rama’s ire and Sagara’s appearance. And then follows this:

Rocks varied upon tumultuous troughs,
A miracle achieved against debacles rough.
His name imbued in the rocks afloat,
A bridge stupendous, the ocean a mere moat. (p.26)

Here breath-taking imaginative expression is coupled with brevity. The simian armies leaping to Lanka and the lord’s emissary going to the ten-headed and the battle following are expressed with utmost economy of words. ‘The Battle’ is given just six quartets ending thus:

Kumbhkarna is allotted a whole poem titled ‘The Slumbering Giant’. Here is humour too with the result we know:

The battle to him, a game hilarious,
Crushing ’neath feet gigantic, he laughed uproarious,
Picking simians in his hands mighty,
Hurled them from heights lofty. (p30)

Hanuman’s devotion at the moment of crisis is described in just ten quartets concluding with the couplet:

The lord and his devotee, an embrace eternal,
Infinite and finite bonded by love unconditional. (p.35)

Its target an immortal energy within,
Deep in ten-headed ogre’s innards therein.
Vanquished by death his ten heads lay,
Ending an epoch by his fateful play.

‘Return to Ayodhya’ is the last poem. It is joyous to all: the devout and to the people of Ayodhya then. The last two quartets reveal the poet’s ability to compose hymns and paeans with consummate skill and all all-surpassing devotion:

The lord and his wife crowned king and queen,
Their bond stronger by turbulent years fourteen.
With brothers by his side, he pledged,
A life of service sand personal wedge.
His reign famed for justice fair
Moral fibre of tenacity rare.(p40)

The hoary epic in itself is a blessing of the Supreme Lord. The poet’s personality and intense devotion make her work ever memorable. The ‘other poems’ seventeen too reveal her poetic imagination and felicity of expression. They are about nature, the sky, the ocean, the trees, birds and colours presented with sonority and thoughtfulness.

‘The Lone Crusader’ is about the eagle, the gridhra, making us remember the two ever remembered birds: Sampati and Jataayu. It is called a crusader signifying its ideal, aspiration and intention. “The Churning” is about ksheera sagara madhana. The tortoise, the Mountain Mandhara , the churning of the milk ocean for nectar are described here briefly. Shiva’s compassion and heroic action of swallowing the garala, poison and holding it in his throat are described. Here is a sample:

Coming to our history ‘Down the Annals of Time’ Srilakshmi describes how after the tryst with destiny things went awry and a great leader was killed.

”Om’ is a poem which needs to be quoted in full for it has the five elements and the supreme lord Shiva extolled in it.

Primeval energy in elements five,
A union symbolic, in the urn earthen survives.
The physical, raw and external.
The mind, sublime and internal.
Consciousness, cosmic and causal,
The seed, pulsating for the supreme arousal,
The intangible omnipotent ether,
Incomprehensible, elusive and un tethered,
Encapsulated in the chant vibrant. (p.53)
Tri syllabic, cryptic, in phonetics brilliant.

God’s grandeur is sung in words in ‘The Earthen Urn’:

Nature is the poet’s first love. The poem ‘Parrots in the Mango Tree’ is a sample and an illustration:

Love of nature involves love of all: the sea, the sky, the birds, beasts, the seasons, colours and sweet smells. There is a poem ‘The Call of Spring’:

Clouds trace patterns esoteric,
Colours blended, an image esoteric.
Notes of the nightingale gurgle and flow on,
Like the brook meandering, amidst sharp rooks born.
Pathways carpeted with fragrant lavender,
Winding ‘neath the blue canopy tender.
Everything so utterly transformed,
By the sweeping wave of nature’s wind. (p.59)

“The Horizon” is a revelation of the things sublime:

The poem ‘Sunset’ is one of the compositions suggesting the divine presence there.

The setting ball of orange plumes,
Fiery brilliance, it seethes and fumes.
Drenching the sky in celestial blood,
Descending onto earth in a golden flood.

Almost everything in nature is in the poet’s ken though the poems are brief and not many. ‘The Serene Alcove’ is the offspring of the poet’s mystic bent of mind and her deep understanding of the human condition which includes tears in the nature of things.

Dwarfed by its colossal magnificence,
Human vanity pales into insignificance.
A breeze picks up leaves russet and crackling
Whipping them along, upward spiralling. (p.62)

Poetic imagination moves around, above and below nature’s radiance, its dance, its rhythms. The Sublime inheres infinity and infinity includes the sublime. In the poem ‘Infinity’, we are told:

The conch hums the roar of the sea in its breast
The dew drop sparkles with the sun’s rainbow crest. (p.64)

‘The Flute Divine’ is the peak of ascension. The Supreme Divine, Lord Krishna is the supreme lover, sublime and ever captivating. Goes the poet’s paean thus:

Residing in all beings large and small,
To a supreme will they rise and fall.
The mighty oak with trunk massive,
Sways to the hymn, a willow passive.

The waters of the Yamuna swirl in whorls dark
An enchanted canopy of peacocks, to the call harks.
Sapphire and gold spangled plumes unfurl,
A diadem heavenly, amidst brooding monsoon curls.

Soulful soothing melodies from the flute divine
Resound through conch spirals serpentine.
Without beginning and without end
The alpha and omega, an infinite (sic) comprehend. (p66)

Judging by the content and quality of the poet’s thought and expression, the avid reader expects more and more sonorous, sublime and soul-stirring compositions from the heart specialist-poet. As the blurb tells us the poet is devout with a deep interest in our mythology, creative writing and painting too. This book has five of paintings (which are colour paintings first) printed in black and white.