A folktale from Himachal, India 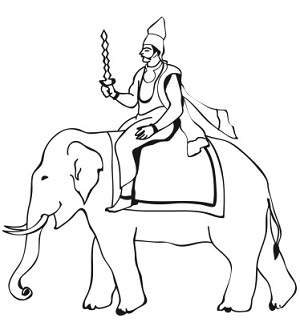 Lord Indra is considered as the lord of gods. He governs heavens and looks after the affairs of gods and goddesses. He is the most effective and powerful lord and in almost all the wars with the demons in earlier ages, he acted as the chief commander of forces, of gods. It is believed that rains, draughts or famines are dependent on lord Indra. If he is unhappy with man and the world, he causes sufferings to humanity either through annihilating rains or famine like conditions. Hill people have different perception about Indra. In certain parts of the state, people call the deity, Indrunaag, the lord of rain and cloud, thunder, storm, plenty and scarcity, love and anger.

If one visits the state, one would find temples of Indra on hilltops with a red flag unfurling on the pinnacles of such small temples. In the evening, devotees pray before the deity and one can hear the tingling of bells creating a calming environment. When the rains are delayed, people visit the temple of lord Indra situated in their respective area and offer prayers before the idol of lord Indra. They pray before him so that rains are plenty.

Indra knows that people worship him and he is pleased at the prayers people offer. Even on the auspicious occasion of marriages and other holy festivals, people invite lord Indra to their places. If the functions conclude happily, people construe it as a blessing of lord Indra and if obstacles or hindrances bring sufferings, the devotee of Indra presume that lord Indra is annoyed. If lord Indra is angry with some people or the living places, he leaves the area and settles down somewhere else people believe.

In such a curious and challenging situation, the devotees get glimpses of lord’s anger and displeasure in dreams and therefore, after consultation, they go to the place with a beautifully decorated palanquin and bring the lord to its original seat of habitation. The holy lord sits on the palanquin and returns to the original seat on the pleadings of the devotees, people firmly believe. An amusing situation arises on such occasions when women ironically observe that their men go to bring the lord, and work as bonded labourers of the lord. If women comment so, the lord is again annoyed and goes back. Again, the people go, implore and gratify the lord of rain if they want crops in plenty. Then, the people recall the backdrop of how lord Indra turned Indrunaag.

Thus, profuse prayers, entreaties and worship turned lord Indra into a powerful king. He was proud of his sovereignty and influence. Full of ego and pride, he began to humiliate holy men and sages previously it is learnt. He wanted to belittle the holy men and therefore, one day he thought of a mischievous plan to inflict injuries on holy men.

He called many sages to his court and expressed the desire to travel around the kingdom in a palanquin. He smiled at the sages and looked at the divinely ornamented palanquin. He sat on the palanquin and asked the sages to carry the palanquin on the shoulders. The sages had no alternative and so they silently without a whisper, lifted his palanquin. Unused to such a hard work, they took steps slowly. As the movement was quite slow, the lord was very unhappy and a little irritated and so he asked the sages carrying the palanquin to take step quickly. He uttered words like srip…srip…sarp…sarp. Burdened with load of the lord, the sages felt exhausted and their frail bodies began aching.

On continuous demand from lord Indra, extreme anger filled the sages, and so they issued a curse against lord Indra that he would become so. As he had uttered the word sarp, Indra turned a snake –a naga. In this background lord Indra become a naag or Indrunaag whom people revere and worship during the rainy season for granting wealth and rich crops. People began worshipping lord Indra as Indrunaag. Here, one is reminded of the tales of Vasuki –the lord of snakes who acted as a churning cord during the struggle for securing nectar. In hill areas particularly, the nagas (the snakes) are worshipped in Kangra, Lahaul and Spiti and a few other areas in order to invoke the blessings of nagas on various occasions.

A tale is often narrated about a severe draught shattering the lives of people of Bharmaur and Chamba where for twelve long years there were no rains and the people suffered. A widespread draught brought miseries to the people and therefore, dried up and desolate fields hurt people. As there were no crops, so hunger and thirst made lives of people miserable. The feudal lord of the village, a Rana thought it prudent to find comforts elsewhere and so he left the land for more congenial environment and areas and the public was left at the mercy of rain god.

On the way, he met a man who earned livelihood through weaving and making thread of cotton wool. He asked the feudal lord the reason of deserting his village. When learnt about the sad incident, the poor weaver advised him to return to his village. He revealed a great and surprising truth to him about his identity that astonished Rana.

He told, “You go back. I am a Bhataunda naga – an image of lord Shiva. The moment you reach home, it shall rain. You will have to offer five sheep in lieu of the blessing.”

On reaching home, he shared the truth, advice offered and other views and spoke of the wonderful words of a man he had met claiming himself an image of lord Shiva. Fortunately, sufficient rains brought cheers and the people were relieved of the sufferings. When Rana and the people found the prophetic words true, they began to offer prayers in the temple of Bhataunda naga. Even today, when draught and famine like conditions prevail, people go to the temple and worship naga.