Salt of the Earth & Other Stories, Telugu short stories by Dr. Mallemala Venugopala Reddy, Translated by U. Atreya Sarma, Published by the original author, June 2013 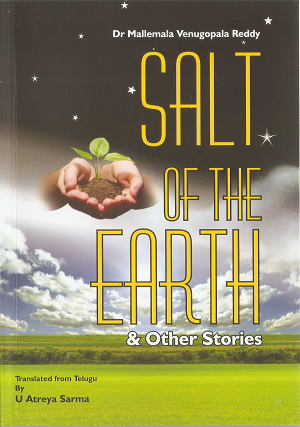 Salt of the Earth & Other Stories is a must-read since these stories are now available in English. Doctoring is one of the age old and renowned professions. For one thing those in that profession are ever hard pressed for time. Story writing is the earliest art of creative imagination and creative writing. Dr Mallemala is a litterateur writing for the last four decades. Writing and spending time with writers has been a passion for him. His stories are about contemporary matters as well about the tears in the nature of things. The stories are unique in that they appeal to the readers as fast moving snap shots. Some of the stories are about serious illnesses like carcinoma. The skilled hand that wields the scalpel uses the pen with the same dexterity and aplomb. The stories are rendered into English by a competent translator who, to begin with, is a bank officer. The stories are placed in the Rayalaseema area of Andhra Pradesh, the area the doctor has lived in and observed all along.

The first (and the title) story ‘Salt of the earth’ is about the death of a school boy when a school building collapsed in an earthquake. The cheque for sixty thousand rupees given to the bereaved of the quake victims is donated by the grief stricken parents and grandparents for the relief organization. In the story “Better half indeed” there is realism. When the husband in old age needed a kidney transplant and is thinking of raising money for that, the children they brought up and are well placed did not promise any help. The old man’s wife comes forward to donate her kidney and gets the operation done with the couple’s savings. Her sacrifice makes her the real better half when children fail to come to the help of their father. “A bond beyond the pyre” is the story of the poorest of the poor in a village. The undertaker in the crematorium is the principal character. In spite of his serious condition he promises to work at the pyre of the landlord’s wife whose kindness it is impossible for him to forget. She treated him well. The undertaker’s son does his dead father’s work half-heartedly. The contrast between the father and son is between gratitude and waywardness. With the change of times gratitude is limited to a few. The story of five friends is narrated in “Drums of glory,” the title being an acronym of five (Dayasagar, Rahman, Upendra, Mohan and Samuel) who had been close friends coming from “five factors, race, creed, caste, religion region and language” as the dying Rahaman writes in a letter addressed to his four friends. The story reminds us of the film song that comes at the end of the story: ‘Friendship alone is life, friendship alones abides.’

“Twice dead” is the delineation of the cruelty of some of the powerful in the villages who take advantage of the impecunious hard workers. Nara-Simhulu, the devoted worker has a good looking wife. The couple is childless. Naga Mallaiah, manager of landlord Subbi Reddy, seduces and makes the young woman prey to his concupiscence. The poor man, already ‘bitten by a snake’ curses the sinful wife, “Yuck! Doggone! Go, get lost, and live in cahoots with that snake-in-the-grass!’ grips the electric wire meant to keep the boars away from the groundnut field. He is twice dead and twice killed too.

The cleverest writing is found in the story “Mothering heights.” The title in the Telugu version ‘Outsourcing’ is brilliantly changed. The reader’s mind goes back to Emily Bronte and her novel Wuthering Heights. ‘Wuthering’ is a dialectical word referring to a fast blowing wind. The title given by the translator is significant since it shows the fast winds of change in society and human thinking. Changed times, changed mindsets and new needs give rise to very important turnarounds. Surrogate mothers have come to boons for infertile couples and the forward looking acts of young women in straits found ways of amelioration. A thoroughly satisfied woman in the story says: “Now there are twenty surrogate mothers in Anand city. These women had earlier delivered children for forty foreign couples.”

“Angel in bed” is a story where the misconceptions of a newlywed young woman are corrected by her understanding husband. His abstinence makes his wife misunderstand him and makes wild guesses. The husband follows the old time belief of staying far from the spouse during the month of Aadi in the South India almanac.

The doctor’s writing is related to the hospitals, patients and the suffering people. The agony and anguish of a patient of carcinoma in the final stage is brought out in the story “Have mercy and grant me death” which is about euthanasia subtly argued. In Telugu it is titled ‘Karunya Maranam’ – literally mercy killing.

“The maid, the mistress and the master” is about a suspicious young woman who doubts the integrity of her hubby. The maid’s justifiably insolent and petulant retort to the mistress’s slight is very impressive. The interesting turns and twists in real life situations are handled by the writer with deep understanding and verve.

Human relations and humanism are the important aspects of saamaajika spriha social consciousness in modern Telugu writing. Many of the stories are replete with this. The importance of the story “Bonded love” is the treatment of the sociological aspects of AIDS which is dreaded to the extent of alienation between friends and even wife and husband. “Stoical, at any cost” is the story of an idealist teacher and his son who became a corrupt high placed officer and convicted. The father however goes to see him at the request of his beloved student saying like Lord Krishna in a very popular and famous Telugu play of yester years with a sigh while going as an emissary to the Kauravas knowing full well of the result “Still, go I must and come back”. The father though distraught is stoic.

“Beyond religion” is the story of a Muslim boy donating blood to a Hindu against the backdrop of the animosity between religions consequent on the Babri incident, years ago. “The story that missed the bus” is about a deceitful lover. A writer himself he writes about ideals and examples of heroism but turns a ‘treacherous lout.’ The Telugu title ‘Kanchiki cherani katha’, a twist of the Telugu saying Katha Kanchiki, manam intiki – meaning the story goes to Kanchi (a place) and manam intiki – and we to reach home. ‘Kanchiki cherani katha’ is differently titled. The Telugu saying is set aside but with some reason. It would take a lot of space if given a footnote. Here is the problem for the practitioner. The Telugu knowing reader of the translation may not be happy but there are several things where it is not easy to get a one-to-one equivalence in things like regional cultures, dialogue and things like these. The flow and flavour are not always possible for the practitioner to retain.

“Outliving the Life” is a story with pathos. A blind man marries a crippled woman and they have son who grows up very well – all things very joyful: thanks to a forward looking gentleman The young man goes to Australia for job and gets killed there. His body is sent by air. The compensation money is passed on by the father to a blind school. The last story “A doctor with a heart of...” is about a disciplinarian doctor who realizes that forgiveness is divine. He saves a driver who should have been dismissed and on the erring man’s retirement takes him as driver for his car.

Salt of the Earth & Other Stories is a collection of doctor-written stories with verve and emphasis on human values centering largely on Rayalaseema life and hospital issues. “Mothering Heights” is an excellent coinage of the translator for the story about surrogate mothers and outsourcing. The practitioner provided reader-helpful notes.