People’s Life and Living in the North East 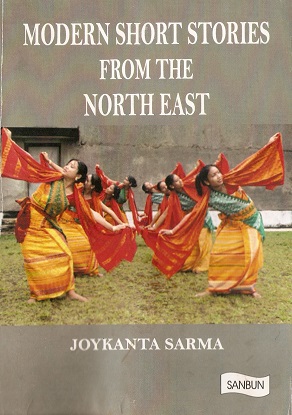 Short stories from the North East written in the regional languages Assamese, Bodo and Manipuri are wonderful reads. Joyakanta Sarma’s book has translations of fourteen stories, four of Assamese and five each of Bodo and Manipuri.

Regional language fiction needs urgent translation into English since there is a pressing need for expanding horizons of understanding between various language communities. This understanding deepens emotive cohesion in our country rapidly forging ahead for promoting the understanding of people in various states. But for the English translation of the Assamese novel Chinnamastar Manught by Prashant Goswami, I could not have known the glory of Indira Goswami’s The Man from Chinnamasta.

Sarma’s work is commendable since he is the son of the soil who knows about the life and living of those far away regions. Sarma is a journalist by profession and for journalists all the regions in the country are their own owing to their professional commitment.

There are four Assamese stories and two Bodo stories translated by Sarma. Three Bodo stories were translated one each by Anil Bodo, Shicna John Awary and Anjali Daimary. The Manipuri stories are the best being very brief -- not more than five pages each -- and very captivating. All the stories in this slender volume bring out with gumption and precision the hard realities of the hegemony and the hierarchy in the castes and classes of characters and real-life situations in the North East.

As Sarma writes in his preface, there are only three modern Indian languages spoken by the indigenous people of the north-east region, Assamese, Boro and Manipuri and these are recognized under the 8th schedule of Indian constitution.

‘The Saviour’ is the story is Dhaniram, a servant who becomes the saviour of a woman impregnated by the young Mauzdar in return for getting the money for his sister’s medical expenses. Barbopa, the old Mauzdar, tells the servant: “Listen Dhani! Save us from peril. You need not bother about land revenue. About your sister’s treatment either. You will get two hundred rupees for that. Take Rupe along with you. She is pregnant.” Poverty and utter helplessness of servants are a horrible reality there. ‘The Monsoon’, again is the story of the heart-piercing reality of a poor fisherman compelled to sell the two bits of fish he has. To make them appear fresh he had to colour the bits with his own blood.

Joyakanta translated two Bodo stories too. ‘Broken is the Guarded Bridge’ is a story of passion and utter disillusionment of Daren, a slave labourer when Mainthi, the woman whom he loves slips away through the very road he was guarding. ‘Dantharu’ is the story of Dinesh, a close relation of the narrator. A drunkard and a cruel extractor, Dinesh molests Raisee, the henchman’s own his sister, and gets killed by him. Bodo stories are brief and telling. Sarma’s translations are succulent. (The lapses in the book are only in proof-reading and copy-editing which cannot be helped by writers.)

‘Dogri’ the Bodo story translated by Shicna John Owary is the shortest and also the best. Dogri is the name given by the narrator to his speckled cock badly ruffled in a cock fight. The destitute chicken was killed to feed a guest by the narrator’s wife who was told by her husband that he would be late for his lunch. What the little daughter tells: ‘Papa, some guest may come today’ comes true. The narrator concludes the story: ‘As I remained motionless with my eyes fixed on the bowl, I heard a mild cough which was obviously hurled at me by my wife from the interior room. Then silence dropped everywhere…!’

‘Gambling’ is the fifth Bodo story translated into English by Anjali Daimary. It is a happy ending story in spite of the fact that the gamblers are usually disaster prone. In this tale the gambler loser loses all, his bicycle, wrist watch and finally his wife too. But all his belongings were promptly returned to the gambler by the winner Romen who also becomes Rameswar’s brother-in-law.

The five interesting Manipuri stories in the book are the shortest. A Flower among the Rocks is translated into English by L. Debbrata Roy. It is the story of the kind wife of a doctor who has a soft feeling for a man who comes to her with a request to send her hubby doctor to his seriously ill daughter. It is the doctor’s wife who calls him a flower among the rocks. The couple go to see the patient but the poor man’s shrewish wife doesn’t allow the doctor to see her daughter and angrily takes her away. The narrator (the doc’s wife) says: “I saw clearly the one who walked away waiving (sic) a banner of victory from what was really his waterloo.’’ The mad love of the little girl’s father for his daughter brings tears into the reader’s eyes.

‘The Taste of Hilsa’ is translated by Manihar Singh. This is the sad story of a fisherman who could catch only one fish, the delicacy called Hilsa, but he has to sell it to a friend who persisted having it. The little daughter of the fisherman cries aloud: “Papa, our fish has been taken away.”

Peepul in the Air’ was translated by Baasi. Truly the Peepul was auctioned by the government when a brick house collapsed on the outer side when the tree was cut. The chief secretary was about to issue orders for three gardeners and two watchmen of the office but a lawyer says that they were given appointment orders. Finally a watchman was transferred to a distant place. The hullabaloo about the auction is hilarious comedy.

‘Destiny’ translated by Iboton Singh is about a young widow who never shed tears but went on earning money for many years educating her brother’s son. She chooses an auspicious day for dying and the nephew concludes the story: “All these years my aunt did not utter a single word about my late uncle. Now at the last moments of her life all her restraints were gone. And how candidly she laid bare her heart to me!”

Why so Late’ is about a childless young woman whose mother-in-law was sent a letter by her son from a distant place not to be harsh about his wife. After his return, when she takes ill, the doctor tells the family that there would be one more member in their family. The story ends with the young woman’s saying: “What prevented you to come a little earlier?”

The stories are good reading with the realism in them: there is poverty, suffering and wickedness all around.