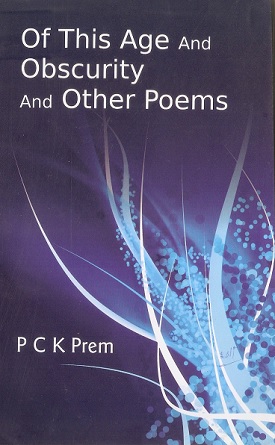 PCK Prem needs no fresh introduction for he has carved a niche for himself long ago in the Parthenon of Indian English Literature as a poet, fiction writer and a literary critic of eminence. This book is remarkably powerful for the poet depicts modernization as mere ‘syphillization’ bludgeoning values hoary and ancient. Our modern culture is broken into smithereens what with the flooding of money and the supremacy of men like Monto, Prem had already presented. There is no straight forward thinking in the powers vested with the murkiest of black money and moral turpitude. No wonder a morality sensitive intellectual is bothered by the fumes of cerebration. The agony of the right-minded was found in the vyakulata of Sage Vedavyasa who wrote the eighteen puranas. In the last century the long poem, Wasteland showed us degradation and degeneration powerfully.

Prem the poet is so perturbed that he is tossed in turbulence. He titled the book without any poem called ‘Of This Age’. There is, however a poem, ‘This Age’. Later there is a very long poem ‘Of This Time’ in ten sections. These poems make us think deep and look around and within with hearts kept firm in their right place.

This collection of poems has four parts: Of Summit and Culture, Fossilized Lores, Of This Time and True Memoirs. All the poems are about the sordid human condition in the modern age where cultures of the hoary times have been undergoing intense and not good change.

Here flinty hearts bloat today
With frigid whispering love
to depict psyche of times uncertain
~*~
As twosome build a pact
broaden and lengthen stillness
in this is hid a wanted terror.. (Of Peace, p. 3-4)

Flirt, frigid, uncertain are key words applicable almost everywhere in the milieu becoming desperately the same everywhere. Efforts at peace making are always half-hearted and feckless. Solution arrived at are concocted for a brief living.

An instinctive pursuing
continues in isles of chill,
for another era
of sadistic hope,
as collective will of united nations
collapses in high podiums
of countless words expended
by soaring men,
not with obvious intentions. (Summit, p.5)

A breach is the ultimate, generally the same always.

It is a futile endavour
to shrug off afflictions of a breach
in width and depth of relations;
a modern sickness it is. (A Breach, p.6)

‘Culture’ is poem of three parts. Men are lonely and each wants to peel off the armour of the other. Here is a stiff necked and straight backed conglomeration of people.

There are sin-flushed meanings
around the loneliness of the man
wanting to peel off armour
when I try to follow edicts
of pillars engraved eras back.
~*~
Others lived in the adjacent room
Masked men played havoc
Woman cried aloud as white robes
Counted beads in fervent breathings
While engaged in legs naked
~*~
One by one each vanished.
~*~
I tried to comfort the man within
that was safe in terror
and quite aggressive and floating
in spite of continuing violent acts
and sprinkling of human blood. (Culture, 8-9)

Rock and pillar edicts of long forgotten eras had something to talk about men and matters and things done or undone. They are best forgotten for they may hurt modernity. The poet talks of man who keeps off, wants to be a spectator or a compere with no great responsibility. The poet tries to comfort man from within. ‘As I Fly’speaks of knowledge and not of wisdom even indirectly.

I simple fly in the terrestrial world
of Confucius and world undefined. (As I Fly.p.12)

The poet thinks of the wisest of the wise and ancient works: Krishna, Hanuman, Aranyakas and Samhitas. Things fall apart and the centre cannot hold, a poet said earlier and in ‘An Option’ says this our poet Prem:

Souls get disturbed
as air around is lately dirty,
in an alignment envious of man
inimical to soul
and the spirit invisible
lives on. (An Option, p.14)

The poet is worried that the man half dead is breathing hard. He observes in with his mind’s eye that those who died yesterday are living today, if only to be quoted or masqueraded as. This is dangerous, not merely frightful, for the souls seeking good bodies could not be born again.
This is a book about perplexities. A deep and healthy sense of values and the objectives and values compel the poet to look around knowing what is inward for the righteous. Cerebration leads him to the end of the tunnel opening into bleak darkness.

He finds learning and knowledge only as fossils. The second part is ‘Fossilized Lore’. Knowledge and wisdom envisaged and shown in our epics and scriptures are stones hardened now. ‘Not a Poem’ is about the actuality around;

Nothing is complete in this world,
it is a competition so often
on roadside, on tables, in tea stalls
which end up either in assembly ,
or in the parliaments with no identities. (Not a Poem, p.23)

‘Prayers’ is about futility:

I recall years spent
in routine lethargy when I felt
captivated by plants gray and sad,
withered years back
treasuring pensive echoes;
of water burnt in utter thirst.
~*~
Out of the garden they gather
with the morning sun
lustre and feshness
and tell, God is here
waiting for a gazette notification. (Prayers, p.25-26)

Man made rules (remember Eliot and Hollow Men) are considered splendid governance. They may not be wise, humane, or even good. Things are broken, shattered into smithereens or splinters. Efforts are on or beginning are promised and forecast.

To own a life of fiction
cut into small splinters
in an effort to organize
a chaotic testament still in draft,
in a new millennium of solitude
if not true. (An effort, p.28)

Existence and even actual daily life becomes a riddle. The state of mind of the protagonist, the poet’s mind is seething and sizzling with cerebration.

A large panorama exhibits
a tenuous connection
between life, art and culture
and the questions arise out of the ashes
even no nomothetes fail to interpret (A Riddle, p.32)

‘Birth Unknown’ goes back to , Jesus and ends with an enigma.

A child christened as death
remained a puritan reality
in desolate hopes of life.

The third part ‘Of This Time’ is about human relationships (not merely man and woman) where there is no permanence or guarantee of things past.

A new perception
of relations,
between men and women
Vedic tradition,
in huge voids and splits
after centuries
of revolting insolence.

This crisis is the consequence of cultural degeneration and fast regression.

A clamour for alien
and strange provokes
and there the tradition dies
in cultural immunity
and spirit of a country is crushed. (Crisis, p.45)

The most serious and so painful damage is that tradition is butchered in neo-pseudo modernity.

It gets beatings of genuine citizens
and in this dichotomy of culture
men brag of a new culture
that fills no vacuum
but poisons bonds,
in a tragic makeover. (Crisis 4,p.46)

And then there is the poem ‘Of This Time’ which perhaps is ‘This Age’ of the title. In It is in ten parts about this time, this moment, this obscurity, this prayer, this priest, this secret, this pillar, this vision, this feeling and this stage. Briefly stated this time is a non existing wedge between cultures with prayers and a wish which only thinks of statues of crowded crossings, this moment is a patchwork of prayers and grimaces and an attempt to enact a historic scene in a theatre of absurd gaieties. This obscurity is in many vermillion painted stony figures with grisly rainbows and multi-layered torsos spitting fire. This prayer is aromatic, tingling bells driving a silly pack to a smoggy coma. This priest is the Pandit that nurses many love scenes. He looks at the huge statue of god, sighs and groans yet singing the rhymes of glory. All this is loudmouthed, much repeated and supposedly sacrosanct humbug. The secret is that the wily priest with dozens of religious sermons showers soft touches on fair ladies with detached looks at others. This pillar is about Dhritarashtra crushing the iron sculpture of Bheema. This vision is one of a cauldron about the energies of the stirring of gods as the body refuses where tragedy occurs. This feeling is one of a man confused, angry and thirsty. The stage is that of Mahabharata revisited. Bheeshma reveals that sin is not new and penance is primeval. And here is the end piece.

I’m probably a new born saint
of an old age in times new
~*~
I laugh with the song
and walk out in disgust
to weave another story
of sins in shrines of gods.(Of This Stage, p53-54)

In ‘Intensity’ we are told again of this time.

To be right is anachronistic
in this century,
fallacious seem efforts
growing flowers
around a graveyard (Intensity, p.55)

‘Great Servants’ is about the lip worship for the great men:

The fourth and the last part is ‘True Memoirs’. It describes experiences and events of the past, things seen, felt and suffered. ‘Spectre’ has six scenes each absurd, ludicrous or absurd but all are haunting. The poet’s imagination in ‘A Monster’ is also harrowing. Here is an example:

Monster is half animal
torn man with a flat skull
that protrudes and juts out.
Out of a photograph now
It tells stridently, it is me
With blood-soaked teeth. (A Monster, 83-84)

‘Feral Truths’ as stated in the title is wild and brutal.

It defines a prophecy of extinction
may be a sadistic acumen
of two thousand twelve, twenty and thirty-six
all instil fears. (Feral Truths, p.90)

The poet is honest, truthful and fearless, and, at times, very near to tears:

It is a task of long back to tread
a beaten path of eunuchs and stooges
to sing of glory unheard and fading lull
before a deafening finish of a life,
without connotation and a motivation to live. (True Memoirs, p.102)

The last poem ‘A Salute’ is an expression of leave taking. The poet is honest, matter of fact, calling a spade a spade. For that reason he lingers long in the reader’s memory.

To offer salute
to existing questions is an enigma
one God is enough, the old mother says
if there is,
possibly that is the truth of a cosmic lie
it too explodes doubting tears
On beloveds’ death
I sit closing my eyes
And see no God now